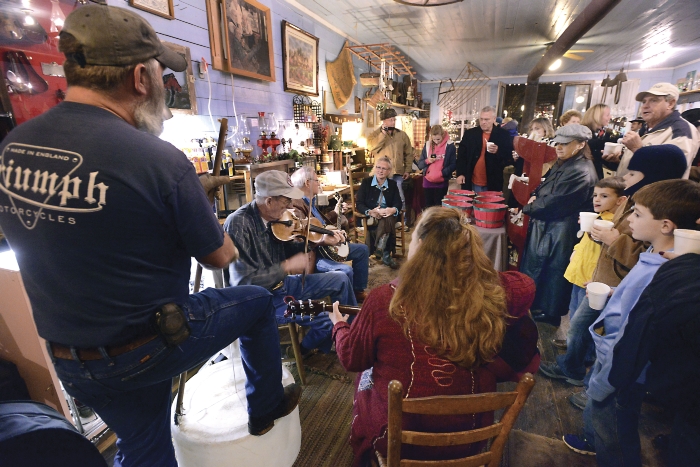 Bluegrass music was provided by Rob Kepley, James Shoe, Elmer Edwards, and Mary Lamber (with back to camera in center) at the E.H. Montgomery General Store during the annual Gold Hill Lighting of the Fall Fires event to kick off the Holiday Shopping season in the Gold Hill Village. photo by Wayne Hinshaw, for the Salisbury Post

GOLD HILL — Christy Trexler grew up in Gold Hill and nothing makes her feel more at home than the annual Lighting of the Fall Fires event, which has since 2000 been bringing crowds into the former mining town.

She’s been attending the annual event, which usually happens the weekend before Thanksgiving, since it began. The Lighting of the Fires was created as a way to celebrate the rebirth of the town. “This place is heritage. This gets me in the holiday mood,” Trexler said.

Trexler attended Saturday with a group of friends — Laura Delaney and her son, Josh, friend Marlene Dunn and her husband, Alan, and the Dunns’ family friend, Kristin Honeycutt. It was Laura Delaney’s second year attending the lighting.

“It’s different. It’s great. It gets you in the holiday spirit,” Delaney said.

Before heading into the village, ticket holders received refreshments served by members of the Historic Parks and Mines Foundation events committee and a taste of wine courtesy of Morgan Ridge Vineyards in Gold Hill. Then it was time to board a trolley into the village, where merchants collected gold nuggets that served as admission into the shops.

In each shop patrons received different goodies like hot cider, corn chowder or brownies and other delicious treats.

Carolyn Davis was experiencing the event for the first as a new business owner alongside her co-owner and 16-year-old daughter, Cierra. The pair operate Mauney’s Store, a mini artisan mall that features crafts and other items that have been repurposed and upcycled, housed in a restored 1840s general store.

The featured artists are from all over the Piedmont region, and their works include art, candles, quilts and jewelry. Davis said she wants people to not just shop in the store, but also linger by the wood stove and feel as though they can sit a spell, eat fudge, drink coffee and relax. Davis is in the education field, but has always wanted to own a country store.

Pam McLamb had never been to Gold Hill until she discovered the town on Facebook through Design Junkies, a group she’s a part of whose members find the beauty in junk and create crafts from repurposed items. She attended the event with her husband and their grandson, Luke, 2. The trio arrived a “tad” early, McLamb said, and had been in Gold Hill virtually all day.

“We’ve been here since noon. We are in heaven,” she said with a smile.

McLamb was at home in that environment and even talked about how much she would love to operate a shop in historic Gold Hill village. She was able to begin her Christmas shopping and loved the fact that Gold Hill was less than an hour from her home in Trinity.

“This is a great town. It’s a well-kept secret,” she said.

McLamb enjoyed the fact that it wasn’t too crowded and she was able to shop around.

“This is manageable,” she said.

The event culminated a family weekend for the Gibson-Cawley family. Karen Cawley was in Gold Hill with her sister, Sarah Gibson, their parents, brother and children.

“This is my first time. We’ve been sampling and giggling as we go,” Cawley said.

“This is such a great way to spend a family evening,” Gibson said.

The sister’s parents, Dale and Joe Gibson, traveled to spend the weekend with them from Little River, S.C. When there are big events like this, the family gets together. The night before, they were at Charlotte Motor Speedway for the Eggnog Jog event.

Cousins Lauren Gibson, 9, and Isaac Gibson, 8, said they enjoyed all of the delicious food.

Dawn Cox and her friend Joyce Johnson were huddled around the huge bonfire eating Brunswick stew and talking about all they’d seen and done that evening. It was their first time at the Lighting of the Fall Fires.

Cox said it was like spending time at grandma’s house, and Johnson said she enjoyed the relaxed atmosphere.

“All of the stores go all out,” said Vivian Hopkins, who sits on the board of the Historic Parks and Mines Foundation. She said the event typically draws 500 ticketholders, but this year they expected 550.

“We like to view this as an old-fashioned event that really showcases the town. You see the town’s restoration efforts,” Hopkins said.

She said some people who attend are regular patrons, and some have been introduced to the unique stores for the first time.

When the Indigo Tea Market closed, sisters Monica Ames and Molly Blackwell decided they wanted to fill that void. Two hours before the lighting event began the sisters opened their own tea shop — Sweet Tea Gift Shop and Tea House. They used to bring their daughters to historic Gold Hill, and they all loved it. Ames and Blackwell, who grew up helping out in their mother’s greenhouses, also specialize in flower arrangements and will also feature gifts.

“It’s so peaceful. It’s a fun place to be,” Blackwell said.

The event is sponsored by the Gold Preservation Society. 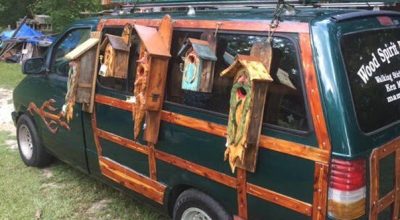 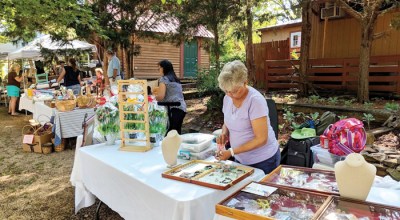