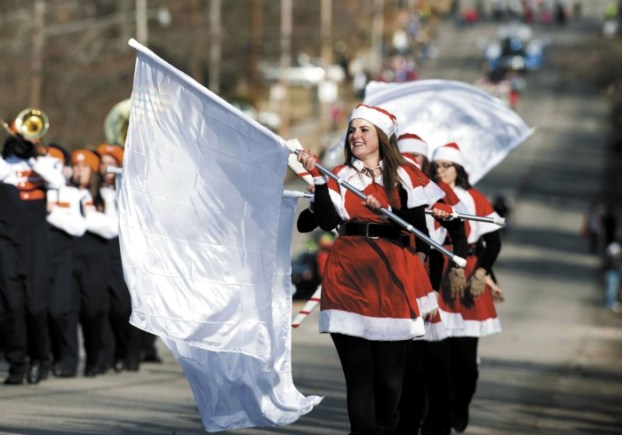 The flag unit of the Jesse Carson High School band was dressed in red Santa outfits during last year's parade.

It’s a tradition more than half a century in the making, and tens of thousands of people will come to celebrate it.

The 55th annual Holiday Caravan Parade is Wednesday afternoon in Spencer and Salisbury. The bands, dancers, floats and Santa Claus will be on hand to kick start the holiday season. More than 150 entries will be in this year’s parade.

The parade will start in Spencer at 2 p.m. and come down Salisbury Avenue.  The music of 11 marching bands will fill the air as the caravan moves south towards Salisbury.

Contest judging will take place in front of the N.C. Transportation Museum, near SunTrust Bank in Spencer.

The parade is set to start on North Main Street in Salisbury at 3 p.m. All of the bands and dancing groups will stop to perform in front of the courthouse in Salisbury, according to parade board member Patrick Pearson.

David Whisenant, the longtime reporter for WBTV 3 News and a native and resident of Salisbury, is the grand marshall for this year’s parade.

“We’re excited to have Dave Whisenant as our grand marshall,” Pearson said, adding that Whisenant is a “great guy” who is “very humble” and has been an excellent ambassador for Rowan County.

Food Lion is the parade’s title sponsor this year. And as part of the Food Lion Feeds program, a food drive will take place during the parade. People in the parade will be pushing shopping carts to collect food from the audience. People are urged to bring non-perishable food items. There will also be drop-off points for food donations, Pearson said.

The food that’s collected will go to Rowan Helping Ministries, he said.

This year’s Miss Holiday Caravan is Michaela Fink of Salisbury. She is the daughter of  Mike and Debra Fink.

South Rowan is already getting into the Christmas spirit. The annual South Rowan Christmas Parade is scheduled to roll through... read more