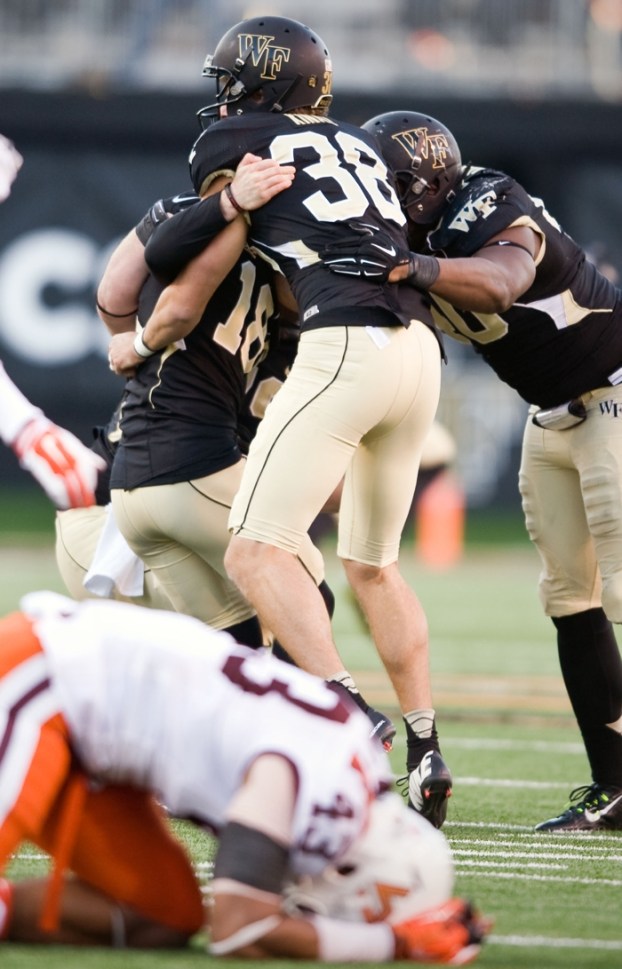 His 39-yard field goal in the second OT lifted the Demon Deacons past Virginia Tech 6-3 on Saturday.

Weaver kicked field goals in both overtimes after missing at the end of the fourth quarter of the first Bowl Subdivision game since 2005 to end regulation with no score. That helped give Wake Forest (3-8, 1-6 ACC) its first win over the Hokies since 1983.

“I just said, ‘Mike, it’s going to come down to you again. Be ready,’” coach Dave Clawson said. “There was a very good chance it would come down to a field-goal-kicking contest.”

They had the ball first in the second overtime, but Marquel Lee and Desmond Floyd sacked Brewer on third down at the 35. That forced the Hokies into a 53-yard field goal that Joey Slye pulled wide left.

“You can’t take a sack,” offensive coordinator Scot Loeffler said. “But you can’t push blame on anyone. The moral of the story is that we didn’t get it done.”

Wake Forest went 4 yards in three plays before Weaver’s kick from the left hash ended it.

For Weaver, it was redemption for a rough day: He missed on consecutive snaps earlier in the game and missed with a chance to win it in regulation.

“I’m hoping it does (come down to him) so I can prove to people that it was a fluke that I missed,” Weaver said.

Wake Forest hurried downfield and moved inside the Virginia Tech 20 to set up Weaver’s 37-yard field goal at the buzzer, but the snap was high and the kick sailed wide right — making it the first scoreless FBS game after 60 minutes since Arkansas State and Florida Atlantic did it nine years ago.

Weaver drilled a line-drive 49-yarder in the first overtime before Slye matched him from 28 yards to finally put the Hokies on the board.

Virginia Tech needed extra time to extend its school-record non-shutout streak — which dates to 1995 — but was denied bowl eligibility and will have to beat rival Virginia to reach the six-win mark for the 22nd straight year.

Defensive tackle Corey Marshall said he was “just embarrassed to be a part of” some of the season-long struggles.

“Chemistry’s good, but we’ve just got to make it work on the field,” Marshall said. “There’s got to be some production and some results to go along with this stuff.”

John Wolford was 18 of 32 for 160 yards for the Demon Deacons, who snapped a six-game losing streak — their longest since dropping nine in a row in 2010 — and gave their first-year coach his first ACC victory by finding a way to win a matchup of two of the league’s worst offenses.

“There were so many plays in that ball game that you just kind of scratch your head at,” Tech coach Frank Beamer said.

Both teams had been decent defensively: Virginia Tech has the ACC’s fifth-best total defense while Wake Forest ranks ninth.

The Hokies entered ranked 12th in the league in both scoring (25 ppg) and total offense (372 ypg), while Wake Forest was last in both categories with averages of 15 points and 205 yards.

This was the kind of bizarre game when Weaver — who entered 13-of-14 on the year — could pull a 42-yard field goal wide left, get a second chance when Kendall Fuller was offside — and hook a 37-yarder even wider left.

At one point in the second quarter, the teams combined for more punts (eight) than first downs (seven). Virginia Tech didn’t run its first play inside the Wake Forest 30 until less than 10 minutes remained in the fourth, and didn’t take a snap inside the red zone until overtime — when both teams start from the 25.