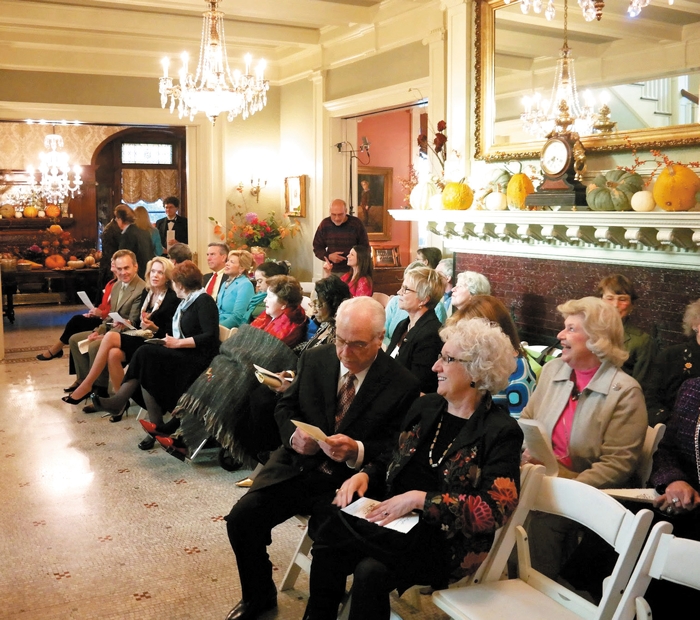 The recital was held at the Hambley-Wallace Mansion on Nov. 2. submitted photo

The first of a series of Musicales was presented Sunday, Nov. 2, featuring soprano Frances McGill. The vocal recital, titled “Songs for Lovers and Dreamers,” was in the genre of the art song in German, English and Russian. The fifty guests were there by invitation-only for the afternoon program.

Russian art songs from the pens of Pushkin, Shelley and Saliba were brought to life in the titles “The Little Island,” “How Fair This Spot,” “Dreams,” and “Midsummer Nights,” sung in their original language. These were set to music by Rachmaninoff.

A late modern American song with cello and piano won the hearts of the audience: “Dream With Me” by Leonard Bernstein.

McGill is a professional singer, conductor and organist who has performed nationally and internationally. She has also taught vocal and choral studies on the undergraduate and post-graduate levels.

McGill has studied two years with international star Levone Tobin-Scott, who has sung on many European opera stages and concert halls. She has been on the faculty of UNC Greensboro for a decade. Most recently, she was honored in the PBS televised celebration of the artist Maya Angelou’s eightieth birthday.

Elizaveta Morshina Auvil, who holds a masters degree from the University for Music and Performing Arts in Graz, Austria, accompanied on the piano.

Cello accompaniment was provided by Ryan Graebert, a member of the Winston-Salem Symphony.

The guests were entertained at a reception following the recital, hosted by Ms. McGill.