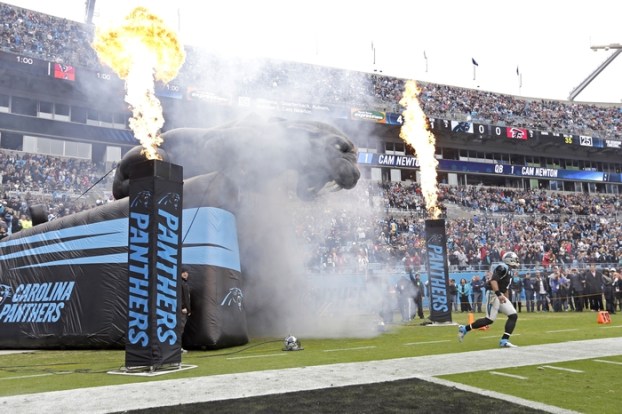 The Associated Press Carolina quarterback Cam Newton (1) runs onto the field during introductions before the Panthers took on the Falcons at Bank of America Stadium in Charlotte. Carolina is on its bye this week and returns to competition next Sunday at Minnesota.

CHARLOTTE, N.C. (AP) — Panthers coach Ron Rivera had a moment of weakness before his players left for the bye week.

“I broke my own rule,” Rivera confessed to reporters this week, “I looked ahead. I told the guys, ‘We’ve got five games left to play. If we take care of business in all five games and one or two things happen, then we win the division.’”

That’s a little out of character for any coach, particularly Rivera, who adheres to the philosophy of “the next game is the most important game” and never looks ahead.

And these are certainly desperate times for the Panthers, who have lost five straight games and are 1-7-1 in their last nine, including a heartbreaking 19-17 loss on Sunday to Atlanta in which Graham Gano missed two late field goal attempts.

Rivera wants his players to return from the bye week with renewed energy and purpose, so he intentionally dangled the playoff carrot in front of them.

As ridiculous at it sounds, the Panthers (3-7-1) remain in the hunt for the NFC South title with Atlanta and New Orleans tied for the division lead at 4-6.

“The best thing we’ve got going right now,” said struggling quarterback Cam Newton, “is that we get to press the refresh button going into this off week so we can collect ourselves and come back stronger.”

It has been a season to forget so far for Newton and the Panthers.

It began with the Panthers signing Pro Bowl defensive end Greg Hardy as their franchise player, a $13.1 million decision that has blown up in their faces.

Not long after signing the deal, Hardy was charged and later convicted of two counts of domestic violence. His ex-girlfriend said he threw her on a futon full of guns and threatened to kill her following an argument at Hardy’s condominium in March.

Hardy, who tied a franchise record with 15 sacks last season, played in the season opener but was later moved to the exempt-commissioner’s permission list after the NFL began cracking down on domestic violence. Hardy hasn’t played since.

Without Hardy, Carolina’s pass rush has struggled. The Panthers have just 23 sacks after getting 60 last season.

Newton has had a rough fourth season.

He enters the bye week 27th in quarterback rating in the league and his rushing numbers are way down after offseason ankle surgery and fractured ribs in the preseason limited his mobility.

“I have to play better,” Newton said.

Newton hasn’t had much help.

Panthers general manager Dave Gettleman parted ways with the team’s top four wide receivers from last season, including veteran Steve Smith. Carolina signed Jerricho Cotchery, Jason Avant and Tiquan Underwood and drafted Kelvin Benjamin in the first round to fill the holes at wide receiver. Only Benjamin and Cotchery remain with the team.

Gettleman failed to replenish an offensive line that lost four players to retirement, the most noteworthy being Jordan Gross, a fixture at left tackle for more than a decade. The struggles up front have led to a poor running game and a lack of protection for Newton, who was sacked a career-high nine times in a loss to Philadelphia.

Defensively, Carolina’s secondary has struggled to repeat last year’s effort as free agent acquisitions Antoine Cason, Roman Harper and Thomas DeCoud have not lived up to expectations. The Panthers rank 23rd in defense this year after finishing No. 2 last season.

Gettleman declined interview requests by The Associated Press to talk about the offseason moves.

Despite their troubles, the Panthers have time to salvage the season. Kuechly said the goal is to return and run the table.

“There’s not much wiggle room for us at this point,” Kuechly said. “Fortunately for us we are still in a position to make a run — and that’s all we can ask for.”

Rivera, ever the optimist, thinks the Panthers can do just that. He feels like somehow the offense will break out of a season-long slumber and a defense that has allowed 37 or more points in five games can find some consistency.

College basketball: Letting go of the game he loved