Healthcare crisis: ‘The carnage is real’ 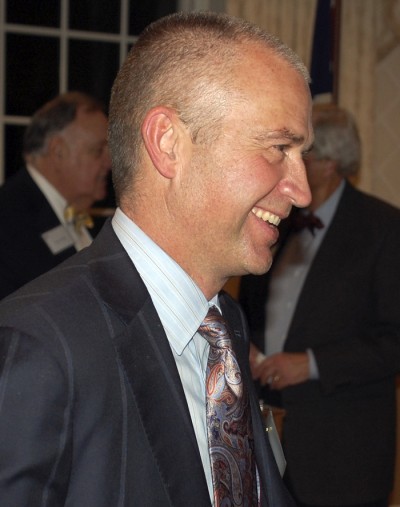 There were some simple reasons the Salisbury Branch of the English Speaking Union invited Dr. Scott MacDiarmid of Greensboro to talk about the American healthcare system Thursday night.

First, MacDiarmid was a good friend of Dr. Wayne “Wink” Cline of Salisbury. Second, he’s a Canadian, and many Americans think Canadians have it all figured out when it comes to a national healthcare system. And third, MacDiarmid is writing a book about this subject titled, “When I Die, You Die: the Fall of the American Healthcare System.”

To put it bluntly, few people probably left Thursday’s dinner optimistic about the future when it comes to the healthcare delivery system in America. “What troubles me,” MacDiarmid said, ‘is how quiet everybody is. … The crisis is right now.”

At the heart of the problem is an infectious disease called greed, said MacDiarmid, director of a urology center in Greensboro. Seven systems make up the body of healthcare in the United States, he said, and they are all infected with the greed virus: patients, physicians, hospitals, government, manufacturers, attorneys and third-party payers (insurance companies).

When it comes to healthcare, these entities are all going 200 mph in opposite directions, taking as much as they can out of the system. The United States has ended up corporatizing healthcare, and MacDiarmid said “the carnage is real.”

Just from a caregiver’s point of view, MacDiarmid claims the doctor in America is dying, especially those like him who are a bit older (he’ll be 54). Doctors today are disrespected, fatigued, burned out, frustrated, distracted, angry and afraid, MacDiarmid said. “We really believe we have been devalued,” he added, within a medical care system driven by hospital bean counters, insurance companies, the threat of lawsuits and government regulation.

He described the next generation of doctors (and nurses) on the horizon as the “B team,” because the top students realize they will be making  million-dollar mistakes if they go into medicine.

They don’t want to be burdened by the costs and time commitment of a doctor’s education, only to become a hospital employee working on short-term contracts  and being treated like commodities. “When I’m a commodity, you’re a commodity,” MacDiarmid said. “When I’m a number, you’re a number.” In other words, when he dies, you die.

The trouble is, our system is broke, too.

MacDiarmid said solutions have to start with awareness, and it’s what has driven him to write his book. Address the greed virus, Slow down access. Reset expectations. Stop the financial bleeding of caregivers. Rethink the workforce. Pass real tort reform. These might be some of the solutions.

But it will take an national effort, a patriotic resolve to revamp healthcare in America. Voices at the grass-roots level, such as MacDiarmid’s, are important, but who will step up as leaders? Who will collaborate? Who will compromise? A little thing such as immigration reform will be a great preliminary test for our leaders. Again, it’s hard to be optimistic.