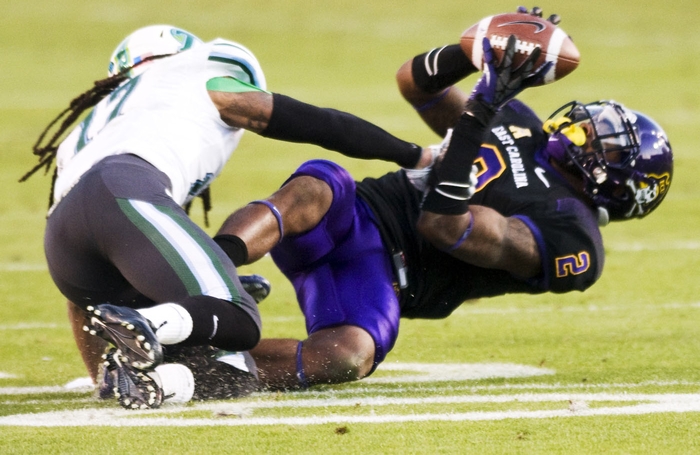 The Associated Press East Carolina's Justin Hardy (2) makes a catch defended by Tulane's Parry Nickerson (17) during the second quarter of an NCAA college football game at Dowdy-Ficklen Stadium Saturday, Nov. 22, 2014, in Greenville, N.C. Hardy set the record for most career receptions in bowl subdivision history with the catch.

The fifth-year senior needed four catches during Saturday’s game against Tulane. He broke that record on an 8-yard catch from Shane Carden for a first down with about 5 minutes left in the second quarter of the 34-6 win.

That pushed him past the previous record of 349 set by Oklahoma’s Ryan Broyles in 2011.

Hardy, who finished with nine catches for 104 yards, said he was happy to have the record behind him “so now I can just go out there and play.”

The record capped a remarkable climb for Hardy, who had just one Division II scholarship offer in high school before ending up at East Carolina as a preferred walk-on. He spent his first year on the scout team before earning a scholarship a year later and quickly earning a lead role in the pass-heavy offense.

“Never let anybody tell you that you can’t be anything,” Hardy said. “Not really having any D-I offers and coming here as a walk-on, I earned my scholarship, earned my playing time.”

The 6-foot, 188-pound Hardy entered the year needing 84 catches to break the record. He had 80 catches for 1,002 yards and seven touchdowns coming into Saturday, ranking third nationally in receptions per game (8.9) and eighth in average yards receiving (111.3).