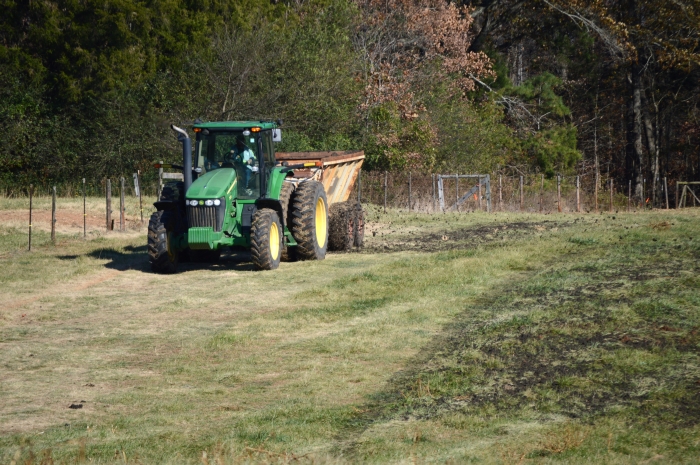 Two distinct sides have formed in arguments over the merits and disadvantages of Charlotte Mecklenburg Utilities spreading sludge on Rowan County farmland.

Farmers comprise one  side, arguing that the biosolid material reduces the overall cost of farming. Rowan and Cabarrus residents, mostly in the Gold Hill area, still remain starkly opposed to the idea. Concerns range from the smell of the sludge to contaminants that might remain despite mandated testing requirements.

Charlotte resident Dr. Lance Riley, who has a Ph.D. in aquatic science from the University of Florida, has been one of the most outspoken against CMUD’s proposed move into Rowan and expansion into Cabarrus County.

Riley, who has family in the Gold Hill area, said his concerns include unknown contaminants in CMUD’s sludge that are hazardous to human health and could have negative effects on those who live near farms..

“They are in compliance because the rules are so relaxed,” Riley said about CMUD’s land application program. “There’s only one person who wants it, the farmer, and he is greedy. At what point will the people override the government?”

Farmers in Rowan don’t currently receive sludge from Charlotte and instead receive any biosolid material from Salisbury-Rowan Utilities. Many of the sites served by Salisbury-Rowan are west of I-85, while most of Charlotte’s sites in Rowan would be east of the interstate.

Harry Corriher, who farms cattle north of China Grove, receives biosolid material from Salisbury-Rowan utilities and said he hasn’t seen any negative results when compared to regular fertilizer. Like many other farmers, Corriher says sludge helps to reduce the overall cost of farming.

“It’s particularly a good source of nitrogen that you don’t have to pay $400, $500 or $600 per ton for,” Corriher said. “There has been no effect, like the heavy metals that everybody is quaking over. I’ve heard no one say that they have been harmed by using sludge.”

Waiting for the state

CMUD has placed 10 different fields on its latest application to the North Carolina Department of Environment and Natural Resources. The 10 total fields measure nearly 300 acres combined. Several other fields lie adjacent to the Rowan County border, in either Iredell or Cabarrus County. Many of the Cabarrus sites are located just west of Gold Hill.

John Risgaard, who runs DENR’s Division of Water Resources, said the public hearing required for the permits would likely not be conducted until early 2015. Risgaard said the reasoning for not having the public hearing earlier is due to the holiday season, which could prevent some who are interested in the issue from attending.

The public hearing is essentially the last phase in granting a permit, according to Risgaard. Who said DENR conducts all of its research before holding the public hearing.

Riley said public comment is important, but is worried it might not have an effect of the final outcome.

“They have yet to turn one down yet,” Riley said. “We can make our voice heard, but, at the end of the day, it has to be absolute public education.”

During a town hall meeting on Nov. 9, Gold Hill residents made their opposition clear. “We don’t want it and we do’t want you,” shouted one of the attendees.

“These farmers are so smug and so greedy,” he said. “For a couple of bucks per head [of cattle] they are willing to compromise the health of the community.”

“CMUD has been land applying biosolid for over 20 years without a report of sickness of people or livestock,” Creech said in an email. “Plant staff work in and around biosolids daily without incident. The science of the treatment processes and the sampling that is performed throughout the process, ensure the end products meet all requirements.”

As evidence of the desire for sludge, Creech cited a waiting list of farmers — in both Carolinas — who want to participate in CMUD’s land application program.

“CMUD does not produce enough product to accommodate the demand,” Creech said. “Farmers who receive the biosolids like the products.”

One of the types of chemicals Riley is concerned about are polychlorinated biphenyl, referred to as PCBs. The Environmental Protection Agency describes PCBs as having a range of toxicity. The EPA says PCBs cause cancers and various adverse effects on the immune system, reproductive system, nervous system and endocrine system.

Aside from toxins, another concern is the sludge’s smell. However, farmers, Creech and McDowell Creek plant manager Joseph Lockler stressed the lack of a potent smell during a tour of the McDowell facility. The sludge stored at McDowell creek doesn’t produce a strong smell, but Creech said a slight smell of ammonia may be present as the sludge is churned up in farm fields.

Past events reason for concern?

In February, CMUD detected PCBs in its Mallard Creek treatment plant. Then, in April, CMUD detected the same chemicals in sludge at CMUD’s McAlpine Creek plant.

The cost to deal with both of the incidents exceeded $4 million.

Creech said the source of the PCBs were traced to a grocery store’s grease trap.

In a separate incident, 73,000 gallons of partially treated wastewater was discharged into McDowell Creek Cove on Mountain Island in March following a brief power failure in a CMUD facility’s disinfection system.

After the incident, a no swimming advisory was issued for a portion of Mountain Island Lake.

This week Synagro spread sludge on Corriher’s farm. The sludge, from Salisbury-Rowan Utilities was spread in rows across his field, with each piece of biosolid material a few inches away from one another.

As he drove across the field, Corriher pointed out the small, orange flags which denote the boundary line for sludge. He said that Synagro employees are under strict regulations to stay within the boundaries. Corriher said that both the cattle placed in a pen a few hundred yards away had grazed on grass grown with sludge. Likewise, the hay piled in his barn had grown with sludge as fertilizer.

Cattle have to remain off of the field for 30 days after the sludge is spread to allow it to sink into the ground, Corriher said. For row crops, Corriher said it’s a bit trickier. He said farmers wouldn’t want sludge spread on farmland when crops are growing because tractors might ruin the crop. Instead, Corriher said the ideal time to spread sludge for row crop farmers is just after a harvest and before a new crop is planted.

Sludge isn’t a total replacement for normal fertilizer, he said. A soil test tells farmers if additional nutrients, such as potassium, are needed. Farmers using sludge isn’t a new practice, he said. The criticism — unknown contaminants — that’s now common among critics of CMUD’s expansion, occurred many years ago, when sludge first came to Rowan County.

“It’s not uncommon for there to be some concerns,” she said. “The folks don’t understand what it is that we are going to be bringing there. As I said at the meeting, we are bringing these products in because there are farmers who want it.”

The final status of whether nearly 300 acres of land can receive sludge will remain undecided until after a public hearing, but Lockler and Creech stressed the longevity and depth of monitoring if Rowan county permits are granted to CMUD.

When Synagro is spreading sludge, Creech said she is most concerned with where the company is located.

“I have to do field inspections and like to know where I need to go to do those inspections,” Creech said. “I follow their trucks as well, unannounced, and make sure they are adhering to the speed limit and not running red lights, not leaving product on the road. They represent the City of Charlotte; they may be contracted with us, but technically they are a face of the City of Charlotte.”

Once the material is placed on land, Lockler said the state requires CMUD to continue monitoring on land into perpetuity — forever.

“If a field became a Walmart parking lot those records could not be lost,” Lockler said.