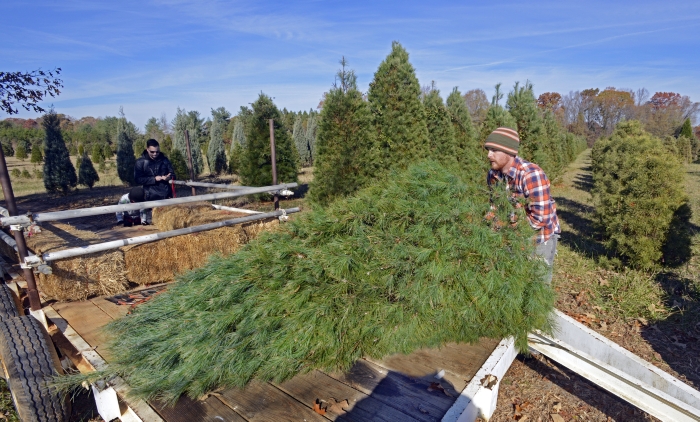 John Haggan loads his family's Christmas tree on the farm trailer at the Pinetop Farm on their annual family Christmas tree selection trip. photo by Wayne Hinshaw, for the Salisbury Post

Don and Cyndee Hawk were determined to maintain their family’s holiday tradition of choosing and cutting their own Christmas tree, despite having a daughter who is about to give birth to their 11th grandchild in a couple weeks.

The Hawks usually go away at this time of year to Blowing Rock, rent a cabin for the whole family and while there, choose Christmas trees to bring back home to the Concord area.

Since their daughter, Julie Chittock, is due to have her baby at any moment they wanted to stick close to home. The family has been choosing their trees together for the last five years.

The Hawks live in Kannapolis and their four children live in and around the Concord area. But each year at this time, they all load up the cars with the 10 grandchildren in tow and one-by-one, choose their trees.

This year, the family chose to visit Pinetop Tree Farm in Salisbury. The farm has been around for 44 years.

Farm owner Bryce Kepley planted his first seedling in 1971. He had a forest fire in 1980 after a neighbors’ trash fire got out of hand. He lost a lot of acreage, but had already harvested a number of trees that year. The fire wiped Kepley out for four years, he said.

Pinetop Farm was primarily a wholesale retailer and up until the last several years, has focused on retail sales specializing in choose and cut trees. The 20-acre farm offers white pine, Scotch pine, blue ice, and Leyland Cypress in various sizes.

When the trees are about three years old, they are trimmed and shaped every year after that. On Saturday, Kepley was joined by his wife Naomi, their son, Jeff and his wife, Sharon.

Jeff said he recalled when he was younger and couldn’t trim the trees with a knife and had to use clippers.

Bryce said on average, most people want a tree that is between six to eight feet tall. He has many repeat customers who receive reminder cards in the mail a week before the farm is open for the holidays.

He enjoys the personal touch of mailing a card instead of using email or social media.

Throughout their 35-year marriage, Don Hawk said he’s made the mistake of bringing home some “scraggly” trees. Now Cyndee’s the one who has the final say on the trees.

“My goal today,” Don said, “is to find the best tree for my wife and each of my children.”

The Hawks oldest daughter, Jessica Smartt and her husband Todd, along with their children — Ty, 3, Sam, 5, and Ellie, who is 3 months old — know what kind of tree they want. The Smartts said they want a six-to-seven foot tall tree with a nice shape. They walked away with one after searching a few rows.

Another daughter, Jenny Haggan, her husband, John and their children — Jack, 5, Tommy, 3, Katie, 2, and baby Luke, who is two weeks old, were also at the tree farm. The criteria for the Haggan’s tree was simple: it had to be full and smell like a Christmas tree, Jenny said. They also walked away with a tree.

Dan and Julie Chittock, another of the Hawk’s daughters, with their children — Owen, 4, and Grady, 2, found a Fraser Fir that Julie had spotted on their way in. Julie said she likes a short, fat tree that will support the family’s ornaments. Dan has a Lionel toy train set that he’s had since he was a little boy. He and the boys set up the train set and decorate. She said each year they get a new caboose or piece to add to the train collection.

The family puts on Christmas music even though it’s a month away, make homemade hot chocolate or homemade apple cider and start decorating.

“It’s a tradition, Julie said.  “We have our dinner (picnic style) in front of the tree.”

The Hawks didn’t find the 12 or 16-foot tree they were looking to place inside, but they did find a smaller one to go outdoors. Son-in-law John Haggan has, for the last several years, taken on the decorating of the outdoor tree.

Once each family chose their tree, they took turns taking pictures in front of their prized pick. Don planned to post some of his pictures to Twitter he said.

Cyndee Hawk said after the families have chosen their tree, they go back to her home for beef stew and homemade rolls. The children will play games and of course, there will be more pictures.

“We make Christmas special because we are Christians,” said Cyndee.  “It’s the best way to share our faith. We like to tell people about how good God is.

Cyndee said family is so important to she and her husband, Don. The family is so close-knit, the three sisters live in the same neighborhood.

“All you want to do is have a day like this with your children, your grandchildren. It’s the greatest experience in the whole world,” Don said.

The couple’s only son, John, was also there with his wife, Morgan, and their son, Cooper.

Frank and Robin Graham of Mount Pleasant arrived at the farm for the first time after finding it online. She searched for a local farm and landed on Pinetop. The family has in the past bought artificial trees and live ones, but their daughter really wanted a live tree, Robin said.

They chose a Scotch Pine for its fullness, the needles hold firmly in place longer and it will support heavy ornaments, Robin said.

Frank always sets up the tree and waters it and Robin and their daughter decorates it. She said they’ve bought ornaments from a place in Pennsylvania called Wendell August, a company whose artisans create handmade pewter, copper and brass ornaments.

Denise Garasic and her boyfriend, Ron Bradley, both wanted a live tree, which would take them back to their childhoods, instead of an artificial one, she said.

The couple each wanted a different type of tree. Garasic wanted a fat, full tree while Bradley preferred a skinny one, so they compromised, she said.

The couple felt a little foolish walking through the fields sniffing trees, but it was important for them to get a tree that had that Christmas tree smell. Garasic said it took them about 15 minutes to find a tree they both could agree upon. She rather enjoyed hearing the history of the tree farm and about the different types of trees on it.

The pair won’t waste any time, planning to decorate the tree as soon as they get it home.

The Kepley family provides bow saws, a hay ride to and from the field and free tree shaking. There is a $1 cost per tree to bail them.

Kepley said they are open Saturdays and Sundays from now until Dec. 14. Christmas trees, wreaths and garland can be purchased from 9 a.m. to 5 p.m. on Saturday and from noon to 5 p.m. on Sundays. Pinetop Farm is located at 830 Majolica Road.