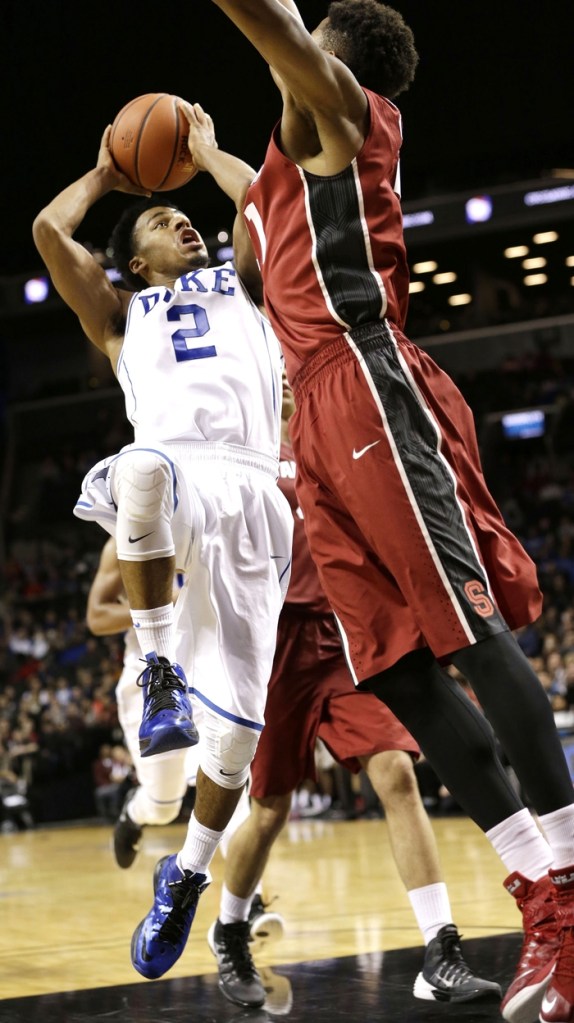 The Associated Press Duke's Quinn Cook looks for a shot past Stanford defenders in the battle for first place in the Coaches vs. Cancer Classic on Saturday in New York. Duke defeated Stanford 70-59.

NEW YORK (AP) — Jahlil Okafor had 10 points and 12 rebounds and dominated the closing minutes in leading No. 4 Duke to a 70-59 victory over Stanford in the championship game of the Coaches vs. Cancer Classic on Saturday night.

Fellow freshman Justise Winslow added 14 points and nine rebounds, and Quinn Cook had 18 points as Mike Krzyzewski got the best of former assistant Johnny Dawkins in the first coaching matchup between the longtime Blue Devils coach and his former player.

Chasson Randle scored 22 to lead Stanford (3-1). Stefan Nastic had 13 points and 13 rebounds before picking up his fifth foul trying to stop the athletic, 6-foot-11 Okafor from going to the basket.

Okafor was amazing down the stretch, scoring eight points, grabbing six rebounds and making life miserable in the lane for anyone wearing red.

Winslow and Cook, the tournament MVP, helped Duke build a 15-point lead in the second half but it was Okafor who slammed the door on Stanford after it closed to 51-43 on a floater by Randle with 10:55 to play.

Okafor pushed the lead to 10 with a layup with 9 minutes to play and then got the crowd of 10,046 at the Barclays Center in Brooklyn excited with a slam dunk after a wonderful pick-and-roll play.

Two free throws by Randle reduced the margin to 10, but Okafor made up for a missed shot by contesting a shot in the paint, which led to a 3-pointer by Jones for a 58-45 lead.

Okafor followed a miss on a fast break to push the lead to 15 and later gave fans something to remember with a monster block on a shot inside by Reid Travis with about four minutes to play.

Stanford, which led from start to finish in beating UNLV in the semifinals Friday, led for 11 seconds against Duke. The Cardinal trailed by as many as 17 points against a Blue Devils team that starts three freshmen but plays as if it has five seniors on the court.

Not only is this team talented, it might be one of Krzyzewski’s most athletic groups and it has a dominant big man in the middle. The Blue Devils led by 11 at halftime and were professional the rest of the way in handling Stanford.

Stanford: Stanford has played in six preseason tournaments and never won one. This is the fourth time it has finished second, and it marks its first loss to Duke in three meetings overall.

Duke: This was the 20th time Krzyzewski coached against a team led by one of his former assistants. He is 19-1, with the only loss coming to Mike Brey at Notre Dame last season.

Stanford: vs. Delaware on Tuesday.

Duke: vs. Furman on Wednesday.