Thanksgiving is served at Providence Baptist 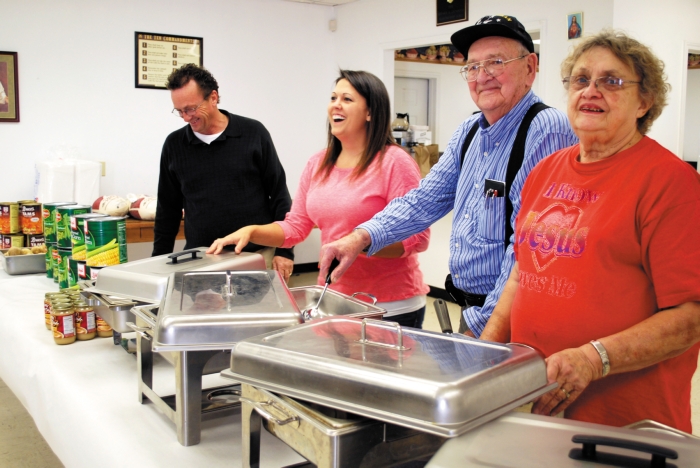 Providence Baptist Pastor Sy Ponds, left, Crystal Brown, Sam Adams, and Ida Adams prepare food and serving trays for an expected 300 or more guests at their church's upcoming free Thanksgiving meal. 'There are many challenges during the holiday season,' said Brown. 'We don't want to see anyone go hungry or be alone on Thanksgiving.'

For volunteers like Crystal Brown of Providence Baptist Church in Salisbury, preparations for this year’s Thanksgiving meal began on Black Friday of last year – the day after the holiday.

“We actually take the entire year to gear up for the Thanksgiving meal,” said Brown, Youth Leader for Providence Baptist.

After all, feeding a large holiday group is no simple proposition. – Buying, cooking, and serving for 10, 12, 18 guests can be a daunting undertaking. Now, imagine feeding 300.

Last year, Providence Baptist and their 30 or more volunteers fed close to 300 people in need, between their at-home meal deliveries and guests who came in person for a free meal at the church’s fellowship hall.

Those who joined in were from all walks of life, Brown says.

“We don’t know their situation, and for a lot of people this is their first time having to ask for help,” said Brown. “We want to make them feel as comfortable as possible.”

Pastor Sy Ponds, Providence Baptists’s pastor of 15 years, began the church’s Thanksgiving tradition eight years ago after he and his sister brainstormed ways to make the holiday season brighter for those in need.

“We just wanted to do something to try to help those a little less fortunate,” said Ponds. “It’s for anyone, someone who may just be alone that day.”

The main source of funding for the meal is a church yard sale held every July. This summer’s sale raised just over $500. Once the meal planning is underway, food is purchased and goes to the homes of volunteers to be prepared.

“We only have one stove in our fellowship hall, so the members actually volunteer to cook the dressing, yams, turkey, hams, potatoes and everything else,” said Brown. “Then we all come together Thanksgiving morning.”

So far this year’s spread consists of five turkeys, six hams, over 200 dinner rolls, and eight economy-size cans of green beans, among other tasty items.

“People will bring in yams and dressing, and there’s just pans and pans of it,” said Brown.

And it all gets eaten. Last year the church even ran out of mashed potatoes in the middle of the meal.

“We had to have someone run out and grab more,” said Brown.

The church’s first Thanksgiving meal years ago served 50 or 60 people. Since then it has continued to grow, with recent years serving 200 or more guests.

“Last year we had an apartment complex that we delivered 100 meals to,” said Brown. Many of the residents were low income, disabled, or elderly. “Without us, some of them would actually have done without the Thanksgiving meal.”

Brown hopes to serve even more people in need this year, over 300 if possible.

Volunteers at the fellowship hall and on the delivery route will be taking prayer requests, and are ready to provide emotional support to those who desire it. In past years, people have been open and grateful for the prayers, Brown says.

“We have people that come and sit down and cry because they had nowhere else to go,” said Ponds. “It means a lot to them.”

The day is meaningful for the volunteers, too. Sam and Ida Adams are 14-year members of Providence Baptist and have helped organize the Thanksgiving meal since its inception.

“I just really enjoy it,” said Ida Adams. “It wouldn’t seem like Thanksgiving without this.”

Last year, the Adamses were so tuckered after distributing the church’s holiday meals that their Thanksgiving dinner at home that night was hot dogs. – Preparing anything else would have required more energy than they had left. And they wouldn’t have it any other way, the Adamses say.

It doesn’t matter who you are or whether you are down and out, Sam Adams says. “Anyone who wants a warm meal is certainly welcome.”

Providence Baptist’s Thanksgiving meal will be held from 11 a.m. to 1 p.m. in the fellowship hall behind the church at 620 Andrews St. in Salisbury on Thanksgiving Day. For delivery requests (on or before Tuesday, Nov. 25 if possible) or to make donations, call Crystal Brown at 704-603-8041.