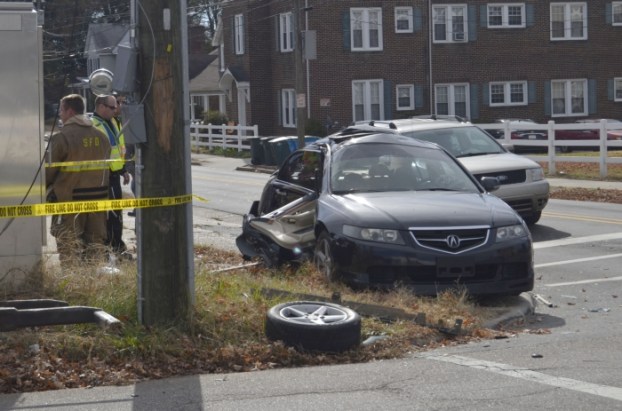 Police and firefighters respond to this traffic crash involving this Acura and a Chevrolet pickup, not shown, on Friday morning at the intersection of East Monroe and South Main streets. Firefighters had to cut the door to remove the passenger from the vehicle. No one was seriously injured. Shavonne Potts/Salisbury Post

Three people were taken to the hospital Friday morning after a two-vehicle crash at the intersection of East Monroe and South Main streets. One driver was charged in the incident and no one involved had serious injuries, responders said.

Edgar Eriza, 20, of Yadkinville, was driving a black Acura traveling south on South Main Street when he turned left into the path of a Chevrolet pickup driven by Neal Smith, 55, of Salisbury. A passenger, Linda Rodriguez, 20, also from Yadkinville, was temporarily pinned inside the Acura. The crash happened just before 10 a.m.

Eriza told Salisbury Police Officer K.H. Boehm he was leaving the Rowan County Courthouse and his GPS instructed him to turn left onto East Monroe Street. His vehicle collided with the pickup,  a work truck for K.W. Arthur & Sons. The Acura spun around and struck a Duke Energy utility pole. The passenger’s side of the Acura received the most damage, and Rodriguez had to be removed from the vehicle.

A guy wire attached to the pole had to be replaced as well as a power meter, which was torn from the pole, Boehm said.

He said the damaged meter shut off power to traffic lights at the intersection. Salisbury Police officers detoured traffic until the meter was fixed and the lights were restored.

Boehm said both drivers had green lights and everyone was wearing seat belts. He said there is nothing to indicate Smith was speeding. Eriza was charged with failing to yield the right of way.

The Salisbury Fire Department, Rowan EMS and Rowan Rescue Squad also responded to the scene. Smith and Eriza were both taken to Novant Health Rowan Medical Center via Rowan Rescue ambulance. Rodriguez was taken to the hospital by Rowan County EMS.

Salisbury Fire Battalion Chief Chris Kepley said fire personnel had to cut the door off the Acura in order to get Rodriguez out of the car. She said neither Eriza nor Smith was seriously injured and both were walking around following the crash.

An armed gunman walked into the South Main Internet cafe Thursday night and demanded money from an employee, but ran... read more