Selling solar: ‘Make it a want’ 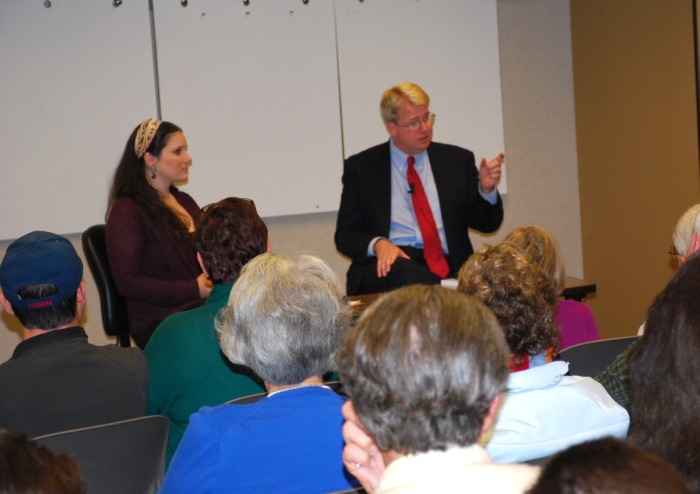 If you were looking for ways to expand the use of renewable energy and solar power, you probably wouldn’t think of a plumber as your best ambassador.

But as SmartPower President Brian F. Keane recently told a packed room at Catawba College’s Center for the Environment, if you want to sell solar water heaters, you’d best go where the rubber meets the road — or the pipe wrench meets the roof. When the water heater goes, your “front line” of defense is a plumber, not the Sierra Club.

The center invited Keane to speak as part of its Solarize Salisbury-Rowan and the regional effort. The D.C.-based nonprofit SmartPower is a partner in the local campaign to help educate residents about the benefits of solar power and streamline the purchase and installation process.

Lane Wallace, community outreach organizer for Solarize Salisbury-Rowan, was also on hand to talk about the initiative’s one-stop-shop approach to helping local residents connect with solar, especially while state and federal tax credits can help defray initial costs. (North Carolina’s tax credit will expire at the end of this year, while the federal solar investment tax credit is due to expire in 2016.)

While long-term cost savings and clean energy are strong arguments for solar power, Keane said that’s often not enough to win buy-in from the average American. As utility officials in Phoenix, Ariz., learned after spending $25 million on an ineffective TV ad campaign to spur solar water heaters before recruiting plumbers to the cause, “you have to bring our message into their world, not ours.”

Since its inception in 2002, Keane’s organization has helped focus the message for clean-energy initiatives across the U.S., as well as internationally. Besides helping Arizona expand solar in the Sunbelt, SmartPower has recently facilitated solar energy growth in communities in Connecticut, Massachusetts and Rhode Island. It also launched a very successful energy efficiency program aimed at more than 400 colleges, America’s Greenest Campuses, which ultimately recruited more than 20,000 students and brought a collective $4.52 million in energy cost savings.

But if you think Keane is simply another greenie preaching the virtues of environmentalism, you’d be dead wrong. Rather than presenting himself as ecological warrior, Kean enthusiastically embraces what he calls the “Mad Men” marketing approach to selling solar energy, although with his engaging stage presence and thatch of blonde hair, he seems more affable professor than a Teflon-slick operator like the TV series’ Don Draper.

Make no mistake, however: Keane is committed to promoting a cleaner, greener planet. He just thinks environmentalists need to retool their strategy. As the one-time adviser to the late Sen. Paul Tsongas made clear in his Catawba presentation, you can’t guilt-trip America into going green, a theme that runs through his book “Green is Good: Save Money, Make Money, and Help Your Community Profit from Clean Energy” (Lyons Press 2012). Even as solar energy costs become competitive with more traditional sources, Keane says the appeal to ecological conscience won’t sway those who aren’t in the roughly 3 percent of Americans—based on independent polling—already bunking in the clean-energy camp.

“We need to sell renewable energy and we need to sell energy efficiency the same way Coca-Cola sells Coke and McDonald’s sells hamburgers,” he says.

To reach American consumers, you have to convince them that a particular product—whether soda or solar energy—is something they either need or want to buy.

And when it comes to clean energy, you aren’t going to win many converts through a dour, “eat your spinach because it’s good for you” approach. It takes marketing that’s based on consumer behavior, which is Keane’s area of expertise.

Keane cites polling that indicates about 84 percent of Americans are interested in solar power. However, that interest isn’t yet translating into purchasing decisions

“The challenge we have with renewable energy is to make it a want,” he says. “Make it something people want to buy the same way they want to buy an iPod.”

The key to doing that in Salisbury-Rowan and other communities, he says, lies in breaking down barriers and focusing on ground-level advocacy from solar users.

Potential solar users may hesitate because they still don’t trust the technology or they’re intimidated by purchase and installation. Or they’re put off by initial installation costs (which can be eased through tax credits and financing). For some, there’s also the cultural perception that solarization must be part of an “environmentally driven” lifestyle or agenda. Once you start down the slippery slope of solar power, could Birkenstocks or a composting toilet be far behind?

To counter those barriers, Keane’s organization and its local partners focus on the grassroots marketing connection—remember those plumbers in Phoenix—and making the process as simple as possible. Ultimately, he says, people are most easily influenced by what their friends and neighbors do.

“The best billboard for solar power is a solar panel,” Keane declares.

If so, that selling point is becoming a lot more visible in the nation and locally. Since 2006, when the federal tax credit took effect, annual solar installations have grown by more than 1,600 percent, according to the Solar Energy Industrials Association. Last year alone, about 140,000 solar systems were installed. So while solar may represent a fraction of the energy market, it’s reaching the critical mass where a niche product transitions to mainstream.

To speed that process, SmartPower often has partnered with local municipalities or other government entities to leverage community pride and broaden support for solar initiatives. In Salisbury, he says, the Center for the Environment fills the need for an institutional anchor.

Keane acknowledges his “Mad Men” methodology can make environmental purists see red instead of green. But for him, the pragmatic approach isn’t just about savvier selling. It needs to become part of the broader dialogue in a polarized environment where local communities are more likely to take action on environmental issues than distant political leaders.

Ideally, he envisions “a nationwide on-the-ground outreach campaign of Madison Avenue proportions” to advance solar use.

“We don’t need more legislation,” he says, “we need more action. And action is regular people putting solar on their roofs through the marketplace.”

That’s the hope and the goal of Solarize Salisbury-Rowan—to give people good information, make them aware that solarization is already being adopted by many of their friends and neighbors and simplify the process for those who recognize the benefits of signing on.

While Solarize Salisbury-Rowan has an online marketplace to facilitate research and its own Facebook page, the emphasis is on local, grassroots, person-to-person advocacy – which Keane calls “the best social marketing.”

“The genius of the Solarize campaign,” he says, “is actually how low-tech it is and how simply it really works.”