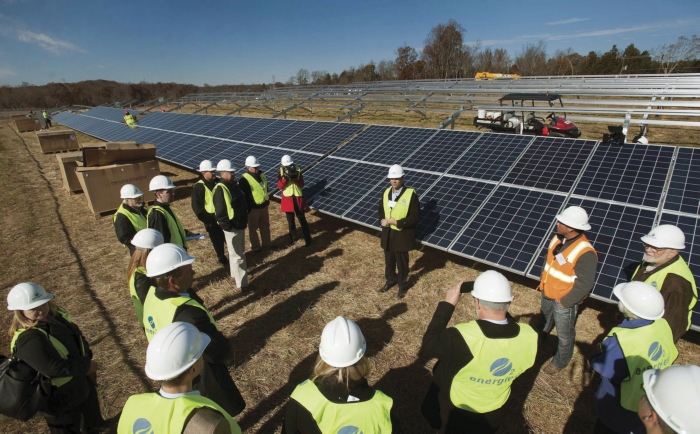 JON C. LAKEY / SALISBURY POST O2 Energies held a tour in November 2014 around the Rockwell Solar Farm that was under construction on Earnhardt Road off NC 152.

ROCKWELL — People got an up-close look at the construction of a solar farm Friday outside of Rockwell.

O2 Energies’ solar farm is being constructed on 20 acres of land off N.C. 152 next to a rock quarry a couple of miles west of Rockwell.

Students, public officials, business leaders and residents from around the area heard from the people behind the project before taking a quick tour of the site and learning a little about how the farm will work.

Once completed. the farm will have 17,000 solar modules that convert the sun’s energy into electricity. The electricity will be sold to Duke Energy to use on its energy grid, according to Joel Olsen, president of O2 Energies and a North Carolina native. Construction is being done by Charlotte-based Narenco.

The solar modules, which are about 3 feet wide and 4 feet long, sit at an angle on metal stands that can withstand 90 mph winds and face south/southeast. All of the electrical conduit is underground.

Plans are to have construction done by mid-December, and the farm will produce energy for 25 years.  Olsen said about 100 people are involved in the construction process.

The 4.25 megawatt site will generate enough electricity to power over 500 homes, Olsen said. In one hour of sunlight, four solar-modules together generate one kilowatt hour of electricity.

“For every kilowatt hour we generate, we make about 6-and-a-half cents,” Olsen said. Each year, the farm can generate up to 6.4 million kilowatt hours.

Olsen said the use of solar power can mitigate the rising cost of energy.

The solar modules generate DC electricity, which is then converted to AC electricity. Duke installed electrical poles at the site, meaning the energy generated at the farm can go directly to the grid.

The site will produce $20,000 in property-tax revenue each year, Olsen said, adding the farm will not make noise or produce any waste or smell. Sheep and cattle from T and D Farms will be used to maintain the landscape.

The land is owned by the family of the Rev. Gary A. Weant. Weant reached out to O2 Energies about using his family’s land in a positive way. Weant said the land has been in his family for six generations. It was previously used for timber, hunting and farming, he said.

Olsen said Weant did a lot of work to gain support for the project from neighbors and the community. Without Weant’s efforts,Olsen said, the project wouldn’t  have been possible.

“These projects really can’t be done without the support of the community,” Olsen said. “Our goal is to maximize the local impact of every project we do.”

O2 Energies plans to partner with local schools to bring renewable energy to the classroom, he said.

Todd Mauldin, owner of T and D Farms, said the project is good for contractors, farmers and the local economy.  Mauldin also owns the land grading business that cleared the land for the solar farm.

Robert Van Geons, executive director of Rowan County’s economic development organization, said the solar farm brings innovation to the county. “It’s a real pleasure to have a project like this here that is engaging the community,” he said.

Jonathan Byrd, with Duke Energy, said the company is committing over $500 million for additional solar facilities.

“We see solar energy as very much an increasingly important part of our portfolio,” he said.

He said North Carolina is way ahead of other states in the Southeast when it comes to solar energy. He urged people to support extending the state’s investment tax credit  for renewable energy that expires at the end of 2015.