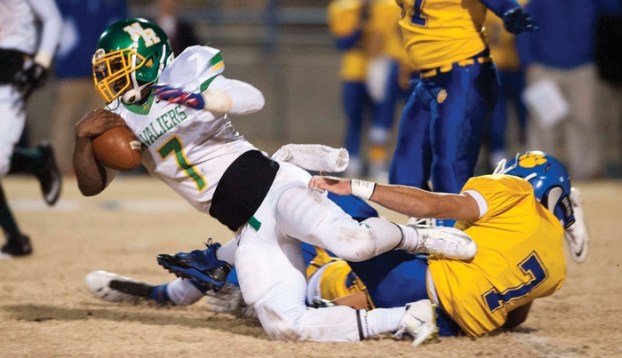 JON C. LAKEY / SALISBURY POST North Rowan's Jareke Chambers (7) falls forward after a tackle. North Rowan High School was defeated 42014 by Mt Pleasant in the second round of the state 2A playoffs.

MOUNT PLEASANT — Mount Pleasant had never beaten North Rowan in football, but then again, the Tigers had never had Cody Reece in the backfield when they took on the Cavaliers.

Reece gave the fifth-seeded Cavaliers 389 pretty good reasons for regretting they faced Mount Pleasant in the second-round of  the 2A playoffs. That’s how many rushing yards Reece had in the fourth-seeded Tigers’ dominating 49-14 victory in a game that looked even on paper.

“We just got outplayed,” North Rowan’s Shrine Bowl running back Jareke Chambers said, shivering after his final game in green and gold. “They’ve got some big boys and they’ve got a really good team that should go far.”

North Rowan (10-3)  basically was out every-thinged by the tenacious Tigers (11-2) who won their 11th in a row and ended the Cavaliers’ eight-game winning streak . North Rowan was  outrushed 459-70, and it was just about over at halftime after Reece had bulled and breezed for 330 yards and five touchdowns.

“Mount Pleasant is a heck of a football team,” North Rowan coach Joe Nixon said. “We knew their offensive line was good ,  we knew the running back was good , and we knew their defense was good. If a couple of plays go different, maybe we could’ve gotten regrouped at halftime and had a shot, but it just didn’t happen for us.”

Nixon hurt for his seniors, a group  that went 13-1 last year and made the third round.

“We didn’t have a good game tonight, but one game doesn’t define their careers,” Nixon said. “They were the winningest group in school history, the first guys to achieve double-digit wins back-to-back.”

Mount Pleasant coach Michael Johns lost sleep worrying about North Rowan’s passing game, but the Cavaliers managed just 109 yards through the air on a frigid night, and one of those completions resulted in a fumble.

“We’d played nothing but running teams for about eight straight weeks, so I wasn’t sure how we’d do against  their passing game,” Johns said. ” I was pleased with our defensive backs. I thought the two critical matchups tonight were  going to be our offensive line against their d-line and our DBs against their receivers. We won those matchups.”

North Rowan got off to a scintillating start as Chambers fielded the opening kickoff at his 4-yard line and nearly went all the way. Chambers fumbled  when he was hit at the Mount Pleasant 10, but Jaleel Hitchens alertly picked up the ball and advanced it to the 4. North Rowan QB Alexis Archie bulled into the end zone from there, and the Cavaliers led 7-0 after 22 seconds.

“We had a guy in position to make the tackle on that kickoff,”  Johns said. “Chambers made him miss.”

Mount Pleasant answered immediately, as Reece poured through huge holes in the Cavs’ line and showed he had enough speed to turn the corner. The first of his five TDs made it 7-7.

North Rowan struck back with Archie hitting a 50-yard completion to Shareef Walker to set up a short scoring run by Chambers. It was the 71st TD of  his career, a school record, but no one dreamed  at that point it would be the last  TD by Chambers — and North.

Then the Tigers came right down the field again and Reece scored again.

Things swung Mount Pleasant’s way on the Cavaliers’ next possession — a disaster that included a loss of 12 when Chambers couldn’t grab a direct snap and a loss of 10 when Chambers was buried on a screen. North Rowan’s Dylan Auten had to punt from his end zone on fourth-and-forever. The Tigers had a short field, and Reece’s 35-yard dash put the home team ahead for the first time at 21-14.

North Rowan struggled to move the ball, and when Reece exploded 75 yards on Mount Pleasant’s next possession, it was 28-14 and clear that  the Cavaliers were in trouble.

Still, the Cavaliers got field position late in the first half on a fourth-down stop by Shane Parker and appeared certain to cut their deficit to a manageable 28-21 at the break. On third-and-4 at the Mount Pleasant 25 with 2:20 left in the half, Andra Cowan made a determined charge up the middle. He plowed for the first down, but as he dragged tacklers, looking for more, he fumbled at the 12.  The Tigers recovered.

“You can’t fault a kid who was fighting for extra yards,” Nixon said. “But that was a big play.”

It got bigger when the Tigers didn’t  just run out the clock. Quarterback Austin Parker, who will be a kicker for Duke, surprised the Cavaliers with a pass play for a big chunk of yardage, and  then suddenly the Cavaliers were chasing Reece one more time. His 44-yard TD sprint made it 35-14 at halftime. The Cavaliers had been close to being down seven at halftime. Instead they trailed by 21.

“That one was the backbreaker,” Johns said. “Then it was just a question of could we kill the clock.”

North Rowan’s defense performed better in the second half and held Reece to mostly modest gains of 3 and 4 instead of long jaunts, but the damage was  already done.

“They loaded the box in the second half and made it tough for us to run the ball,” Johns said. “But we were still able to get some first downs and keep the clock moving.”

Mount Pleasant’s Clayton Horn scored the only TD of the second half.

In addition to Reece’s heroics, the Tigers got tremendous efforts from linemen Isaiah Cox and Zach Mayo. They went both ways, opening gaping holes and getting sacks.

“North Rowan was a really good team, big and physical, and they played hard,” Mayo said. “That No. 7 (Chambers) is really talented, but this was just a night when we played  a great game.”

Johns, who will lead his team at Black Mountain Owen in the third round, never dreamed Friday’s victory would be as lopsided as it turned out e.

“Credit our offensive staff with a great plan and we had our best defensive effort of the season,” Johns said.  “Our kids just beat them upfront.”

By Alan Ford The Shelby Star SHELBY — One of the oldest clichés in football is that defense wins championship.... read more