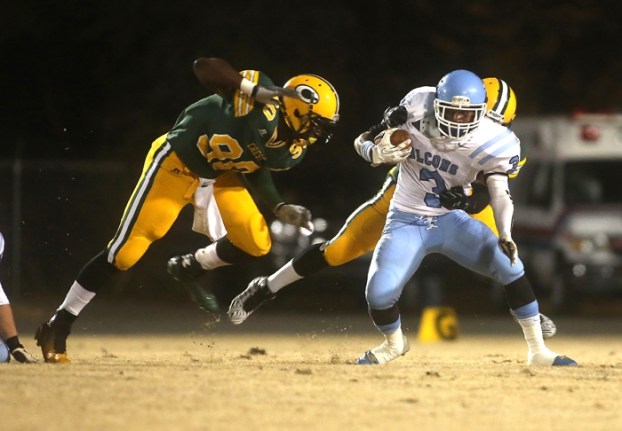 SHELBY — One of the oldest clichés in football is that defense wins championship.

While true, it doesn’t hurt to score a few points now and then.

That was what transpired at Crest High’s Sid Bryson Stadium Friday night as the unbeaten Chargers defeated West Rowan 28-7 in the second round of the 3A state playoffs Friday night.

Both defenses proved to be tough customers. But Crest (13-0) took advantage of some breaks and also got a 189-yard rushing, four-touchdown night from junior tailback Tre Harbison to continue its postseason march. The Chargers will host Forestview, a 37-13 winner over Canton Pisgah, next week.

“Give them credit, they (West Rowan) are a tough football program,” Crest coach Mark Barnes said. “They’re a tough out … they’re used to winning.

“I thought our defense was dominant but our offense didn’t execute. We didn’t maintain blocks and we dropped some passes, yet we were able to win 28-7.”

An interception by Crest’s Dominique Roseboro set up a one-yard Harbison run early in the second period. The Chargers’ Jordan Oates recovered a West Rowan fumble forced by linebacker Justin Foster leading to Harbison’s 42-yard sprint to make it 14-0 going to the half.

But West had field position in Crest territory almost the entire third quarter, putting the Chargers’ defense to the test.

“Their defense was as good as advertised,” veteran West Rowan coach Scott Young said. “It was a really physical game. But I thought our defense stepped up to the challenge, too.

“In the third quarter, we couldn’t get it to 14-7. We didn’t get that punt we went after when they were back at the one, then we missed a backside route (pass).”

The Falcons (8-5) started four possessions from their own 45 or closer – including one series after a fair catch at the Chargers’ 33 – in the third period but couldn’t break through. The pass rush of Crest ends Omar Brooks and Chris Willis again proved too much, along with glue-like coverage in the secondary.

“Our DBs are a lot better than people think,” Barnes said. “We match up good with other team’s speed people, and we still good a good rush.

“Our defense has played like that all year for us. They made play after play. But offensively we’re going to have to play better.”

Crest finally was able to flip the field when an Alex Trejo punt pinned West Rowan back at the one. After the Chargers held again at the 39, they marched into position for Harbison’s 15-yard scoring run. After a punt, Harbison broke free up the middle on a 68-yard touchdown romp for the final Crest points.

West Rowan stuck in a late touchdown with the running of Jovan Quarles leading to a 7-yard Danny Flanagan score with 1:18 to go to make it 28-7.

By Tyler Norris Goode The Asheville Citizen-Times BLACK MOUNTAIN — Not even a running clock could keep Jager Gardner from... read more