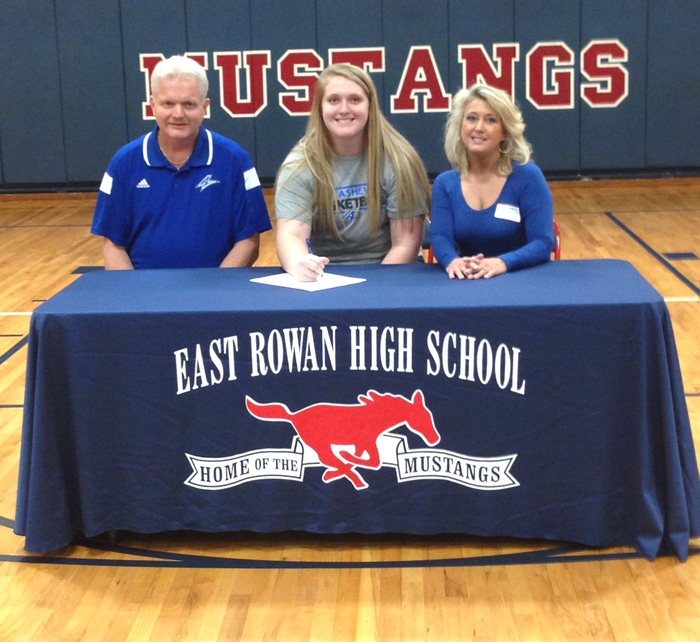 Kelli Fisher and Asheville are a perfect fit. Fisher, East Rowan’s 6-foot-2 center, likes the school and the town.

So it made sense for her to put her name on a National Letter of Intent to play basketball at UNC Asheville next season.

“I really like the area, the coaching staff and what they are trying to do with their program,” Fisher said this week.

“There are a lot of different types of people,” Fisher said. “The culture is different and interesting to me.”

And the weather, which she called “cooler.”

Fisher chose to head west into the mountains instead of going to Richmond, which also showed interest. Five players signed with the Bulldogs in the early signing period.

Fisher, the tallest among the signees, averaged 15 points and 10 rebounds per game while leading the Mustangs to the South Piedmont Conference regular-season and tournament championships. She is a three-year starter for the Mustangs.

“Kelli Fisher is a gifted low-block player who will bring tremendous paint presence to our team. She has great hands and feet and will present matchup problems for our opponents in the paint,” Bulldogs coach Brenda Mock Kirkpatrick said in a release on the school’s athletic site.

“Kelli not only has the ability to score but a great feel for the game and is a great teammate. She is a vocal leader and is willing to say the right things in the huddle and on the court. Kelli will be valued just as much for the intangibles on and off the court as will her efficiency in the paint.”

Head coach Danielle Porter said Fisher has taken her role as a leader “more seriously” as the Mustangs prepare to defend their league title. Porter also agrees with the the sentiment of Fisher being a great teammate.

“If I was a college coach, you can almost recruit Kelli on personality alone,” she said. “She’s everybody’s best friend.”

Fisher has spent a majority of her career with her back to the basket. She said she wants to work on her dribbling and face-up game and will try to improve her mid-range and outside shooting. Though the physical nature of the post will serve her well at the next level.

“They are excited because they need a back-to-the-basket player,” Porter said. “Kelli is kind of a traditional-type player that like to get down there and bang around. I think that part fits well.”