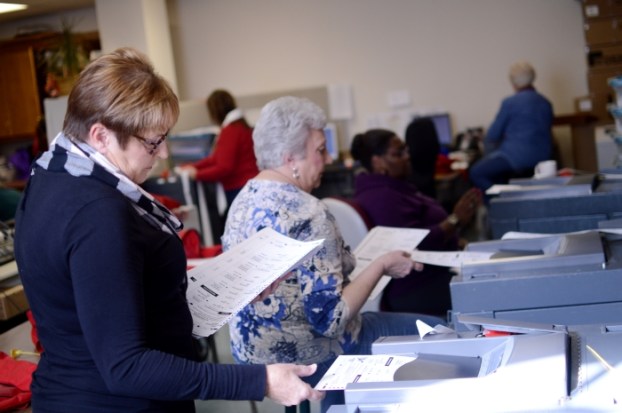 Josh Bergeron / Salisbury Post - The board of elections was filled with people and extra machines this week during a recount for a North Carolina Supreme Court race.

Political notebook: Solution is critical for board of elections’ space needs

Nearly a dozen people packed into the Rowan County Board of Elections office this week during a recount for the North Carolina Supreme Court.

Because it was a statewide race, Rowan certainly wasn’t the only county counting ballots. Challenger Mike Robinson led incumbent Cheri Beasley in Rowan by 4,557 votes before the recount was requested, but it was the opposite statewide, with Beasley leading Robinson by 5,427 votes or 0.22 percent. The final results have not been announced.

Once the Rowan Board of Elections finished its recount, the results remained almost identical and the final, local outcome didn’t change. Robinson lost four votes, while Beasley gained several votes.

Elections Director Nancy Evans said the changes in vote tally could have been caused by improper marks, among other things.

The recount results are meaningless for Rowan. Local results didn’t change significantly. The more important outcome of the recount and the entire election season is the focus on a problem that plagues the Board of Elections — space.

The elections office is located on the first floor of the Rowan County Administrative Office building at 130 W. Innes St.

County commissioners have emphasized many county departments’ need for space. Vice Chairman Craig Pierce recently said the county is a lawsuit away from being required to provide the space, suggesting that the state could mandate that Rowan provide more square footage for a department that county buildings house.

The ultimate location of county departments is up for debate. Outgoing commissioners bought the mall and now say that is the best location for growing county departments. Other empty county buildings would be too costly to repair or wouldn’t adequately suit the departments, they say.

Another option is to build but to Commission Chairman Jim Sides building is far more expensive than renovating the mall.

Finding a solution is a pressing need. The Board of Elections office is a great example.

Throughout the election season, election equipment was carefully stacked against walls, leaving small walkways into offices. When the Board of Elections met for its regularly scheduled meetings, board members were surrounded by either ballots or election equipment. Evans’ office also served as the board’s meeting room and a storage space.

When asked for a few comments about how the space affected her working environment, Evans said it can be difficult to conduct an election with the tight space she is given.

“We do the best we can and thankfully nothing terrible has happened as far as anyone getting hurt or any problems with the election,” she said. “With the small staff that we have, we to try to maneuver things out of the way to make room for other things to work on, and it is very exhausting.”

The county solution to the space needs was the mall. Well, the mall has been ruled out, at least temporarily, with the city’s denial of a special use permit to put government offices in the mall.

Much like national politics, it’s time for the city and county to figure out a common-sense solution. Finding a compromise is an obvious answer, but for that compromise to happen, both sides have to give a little. And, perhaps one side can give more than the other.

Within minutes of President Barack Obama’s executive order announcement Thursday evening, U.S. Reps. Virginia Foxx and Richard Hudson, both Republicans, spoke out in opposition to Obama’s plan. Their main concerns seemed to be whether Obama was overstepping his legal authority.

Among other things, Obama’s plan granted an estimated 5 million immigrants legal status, meaning they wouldn’t be deported. The immigrants would get a work permit and social security number, but not green cards.

Hudson and Foxx issued similar statements after the announcement. Both said the immigration system was broken, but disagreed with Obama’s method.

“By bypassing Congress, President Obama is disrespecting our Constitution and ignoring the American people who demanded that leaders in Washington work together to solve the problems facing our nation,” Hudson said. “Granting amnesty to those here illegally is an affront to American workers and the people who are trying to join our country legally.”

Both Foxx and Hudson also mentioned border security as a necessity before passing immigration reform.

“America’s immigration system is broken,” Foxx said. “It’s not working for families, employers or taxpayers. However, it is Congress’ responsibility to pursue reforms and build consensus toward a strong immigration policy that begins with border security.”

The folks at Rick’s Barbecue & Grill told me the news: At 75, golfer Bill Sides finally scored his first... read more