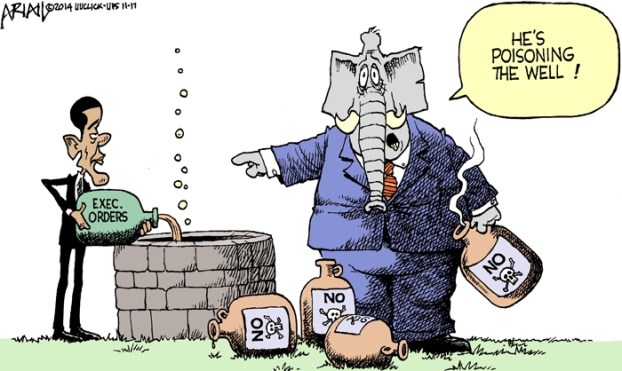 It’s all about Barack

Gary Pearce, from his blog, Talking About Politics.

All American politics today – the battle over immigration, the election two weeks ago and even legislative elections in North Carolina – is all about Barack Obama.

Presidents always dominate the political scene. But this is a special case. Yes, it’s about race. But it’d also about something more, something deeper in America’s psyche.

Here’s a theory. The election of Obama in 2008 as our first African-American President was a shock to the American system, both pro and con. For blacks and for whites who cared about equal rights, even if they didn’t vote for Obama, it was an historic step forward. For many other people, well, not so much.

At the very same time, we went through another huge shock to the system: what felt and looked like an economic collapse. I know very smart and very affluent people who were so worried they were hoarding as much cold cash as they could. It’s as close as we’ve ever come to feeling the fear that our parents and grandparents felt in the Depression.

So we had a double-whammy: our first black President and an aggressive – and controversial – effort by the federal government to intervene in the economy and prevent a collapse. An effort begun, although this is totally forgotten today, by the Republican administration of President George W. Bush.

Bush’s Treasury Secretary, Henry Paulsen, famously got down on one knee and begged Speaker Nancy Pelosi to save his plan to save Wall Street.

Somehow in our minds, that all morphed into an image of Obama as a Welfare King, taking money away from honest, hard-working people and giving it to lazy, good-for-nothings who just want a handout – the Great Redistributor.

Which then led to Wall Street types like Mitt Romney, who were rescued by Paulsen’s plan, blasting Obama for raiding “makers” and rewarding “takers.”

Now that narrative has taken hold, and Democratic politicians and political operatives in North Carolina this year tell about voters – especially older white voters – who refuse to even talk with a candidate who is a Democrat, let alone vote for him or her.

The divide in the Democratic Party today is whether to try to answer their questions – or to simply drive up turnout among those people (judging from the Tillis-Hagan race, 47 percent this year) who have stuck with Obama.

The Republican Party has chosen its course: No to Obama, all the time, whatever he does.

But a party of No ultimately has no future. Especially if the other party figures out how to bridge the divide. And say Yes to everybody who’s trying to make it in America.

What, in the name of God? It is a question that demands asking, that haunts this most recent atrocity. Ordinarily,... read more