College basketball: Letting go of the game he loved 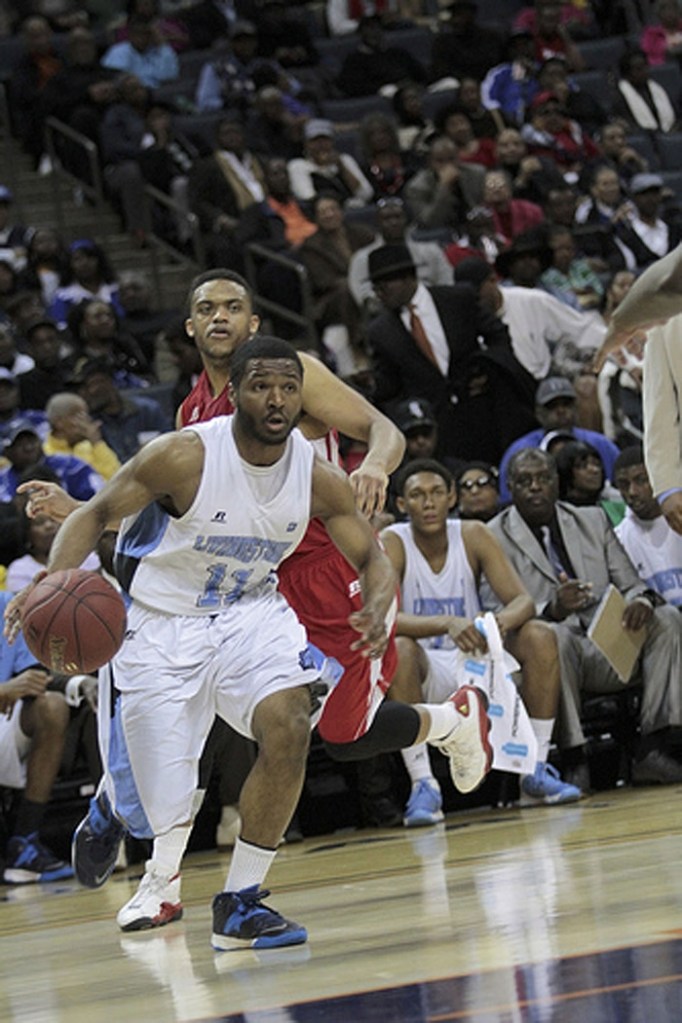 Submitted photo Mark Thomas, shown playing for Livingstone in the 2014 CIAA Tournament, had to give up playing basketball because of a heart condition.

When Livingstone College captured its first CIAA title in March, Mark Thomas couldn’t have been happier. The historic victory helped erase the sting of losing the title game the year before to Bowie State.

But in July after passing out during a pickup game and being rushed to a Charlotte hospital, Thomas received grim news. He suffers from hypertrophic cardiomyopathy. He can no longer play basketball.

“I’m not sure how I felt when the doctor told me the news,” said Thomas, who recently underwent surgery to be fitted for a defibrillator. “The whole time I still thought I was going to be able to play basketball.”

Learning his playing days are over wasn’t easy for Thomas, a Saginaw, Mich., native who excelled at hoops since he was a kid. Besides being named 2014 Central Intercollegiate Athletic Association Player of the Year, he’s been named an NCAA Today’s Top Ten winner.

For 41 years, the NCAA has recognized athletes who excelled in the classroom, on the playing field and in the community. Thomas is the first recipient from a historically black college or university.

“Mark Thomas is one of the best student-athletes I’ve ever coached,” Stinson said. “He played exceptionally well for Livingstone for three years while maintaining an outstanding academic record.

“I was shocked when I learned about his condition, and my heart goes out to him because he’s such a fierce competitor. But knowing Mark, he won’t let this get him down. He’ll rebound and emerge even stronger.”

Thomas’ mother Leslie, who traveled to North Carolina to be by his side during the surgery, said she hopes his academic record will help him land a good job and make the loss of basketball a bit easier to accept. Thomas, a business administration major, graduated with a 3.7 GPA.

“Coach kept telling me my health was more important than still being able to play basketball,” Thomas said. “He’s been calling me a lot and including me in what’s going on with the team. My mom is my biggest supporter and my best friend. She’s the strongest person I know, and that’s where I get my strength from.”

Thomas is trying to remain upbeat about his situation and feels blessed he found out when he did. Hypertrophic cardiomyopathy is often asymptomatic and is a leading cause of sudden cardiac death among many young athletes.

“I miss basketball, but I did enough at school to where I can look back and say I had a pretty successful career,” Thomas said.

“I did a lot to help Livingstone and the community, and I feel like I’m a role model. If I can still be around basketball in some way, perhaps as an assistant coach on the collegiate level, I feel like I’ll be fine.”