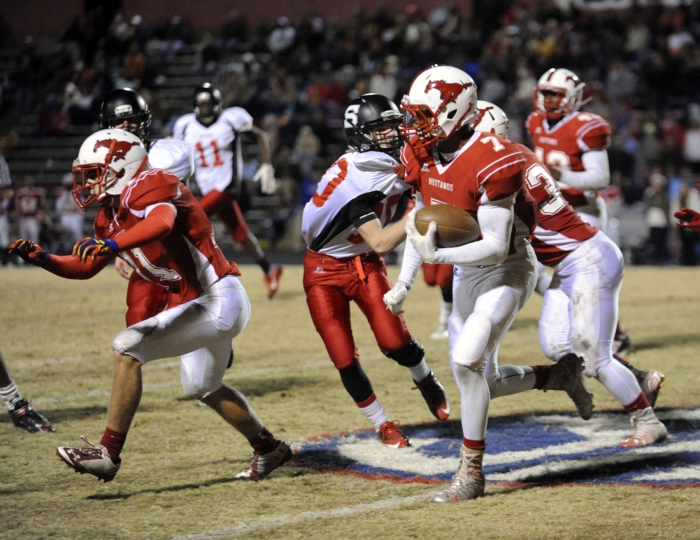 That’s what No. 15 East Rowan did Friday at No. 2 Morganton Freedom in the first round of the 3A state playoffs.

The Twitter hashtag was first sent to the world by East Rowan receiver Seth Wyrick about 24 hours before the Mustangs’ playoff opener. It was used again a few hours later by linebacker Jake Boltz.

It wasn’t. Quarterback Samuel Wyrick threw a touchdown pass to receiver Shiheem Saunders and a two-point conversion to receiver Seth Wyrick to give the Mustangs the 50-49 upset.

After the game, Samuel Wyrick tweeted, “Seriously the best feeling ever #ShockNC #whynotus”

“I can tell you after the game I didn’t know what to feel,” he said. “I was shocked that it came down to that. Coach [Kenneth McClamrock] has been telling us all week that it’s going to come down to the final play of the game.

While the prospect of No. 15 upsetting a No. 2 is, in itself, shocking. When that No. 15 seed is the 2014 East Rowan Mustangs, anything is possible. In addition to last week’s upset, they stomped West Rowan into the ground and won a shootout with Cox Mill. The No. 8 Chargers travel to No. 1 Asheville in the second round of the 3AA playoffs.

“Whenever the whole team shows up and we’re clicking, I don’t know who could stop us,” Boltz said.

There have been those nights when it doesn’t click. After the West Rowan win, the Mustangs lost to Ledford. There was also the two-touchdown loss to South Rowan in the regular-season finale.

McClamrock attributed the up-and-down nature of the team learning a new offense and getting adjusted to a slightly different defense. He said it’s also because the players are learning how to win, how to be competitive on a weekly basis and how to consistently expect success.

That defeat to South Rowan wasn’t on the players’ minds as they rode the bus to Burke County.

“That was done with Friday before we got out of here,” McClamrock said. “It cost us a lot of seeds in the playoffs. It cost us a home playoff game. And the kids were determined to move beyond that and to show we’re a whole lot better team than we showed versus South.”

The #ShockNC campaign is on the road again this week. It’s going to No. 7 West Henderson (9-4) in the second round of the 3A playoffs. McClamrock said his team has to score on every possession, stop the run, and trust their fellow players and coaching staff.

“We have to come out being focused,” Wyrick said. “Against Freedom we were bound and determined to win that ball game. So I believe if we do that same thing Friday night, we’ll come out with another win.”

If that happens again, though, it’s doubtful North Carolina will be as shocked as it was last week.

Watts lights it up against Catawba