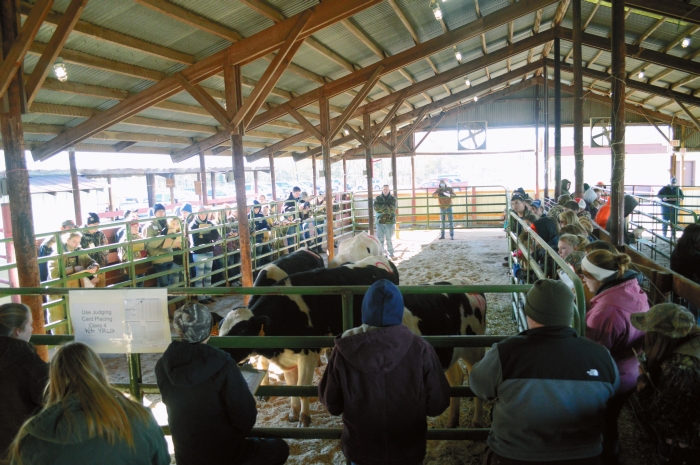 Hailing all the way from the mountains to the coast, students crowded into the Rowan County Fairgrounds Thursday for the annual Future Farmers of America dairy competition.

At the competition, participants are scored based on how well they apply dairy cattle evaluation skills learned in the classroom. Each team evaluated six classes of dairy cattle and defend reasoning for evaluation to a panel of judges. A written test is also a part of the dairy contest.

“At the turn of the century, the 1800s, this was important because you wanted to select the best traits in order to improve your livelihood and your farm,” Davis said. “Not all of the students here today are going to go into dairy; it’s going to be a very small amount. They’re all going to be consumers, so while they are here we educate them about dairy products and different aspects of the dairy industry.”

Davis said Rowan County was the site for the state dairy competition because it’s located near the center of the North Carolina Dairy industry.

Contestants didn’t officially find out the winner on Thursday. Instead, the championship will be awarded at the state convention in Raleigh June 16-18, 2015. During the convention, the top three teams and highest scoring individual will be recognized.

State FFA Vice President Marty Wines said the student competitors have to consider several different biological factors when deciding which cow might be the best, including the overall udder quality and how well an animal walks.

Wines added, even for students who might not end up working in the dairy industry, that learning how cows contribute to products on store shelves is important.

“Whether it be yogurt, ice cream, or milk, a lot of the calcium comes from milk products,” he said. “It gives the students a chance at a hands-on experience that they may not have a chance to do any other time.”

“In the western part of Rowan County, we are very blessed with having one of the last dairies in the county,” he said. “The best advice I could give [to students] is to go with your gut. You usually do better than you think you do, but when you get out of the contest you always think you did terrible.”

As a teacher, Silliman also talked about the educational value of the dairy competition.

“The kids have to use decision making skills, using two things and asking which one is better,” he said. “That type of ability can be applied to any career. And, from a public speaking standpoint, the ability to get up in front of somebody else or a group and articulately convey why some something is better that’s invaluable.”

The dairy competition is one of 43 different career development events offered to FFA members on a state level.

Darrell Blackwelder: Be careful with silverlings and don’t prune…