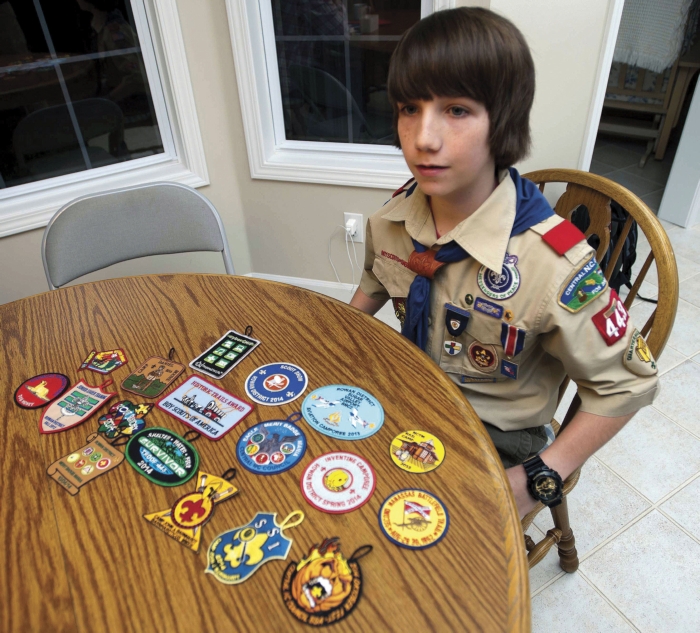 JON C. LAKEY / SALISBURY POST Jared Hensley sits at his kitchen table with a spread of camporee patches he has accumulated during his scouting career. Hensley, a 13-year-old boy scout from Troop 443, recently achieved the rank of Eagle Scout. He also has accumulated a running total of 64 merit badges. He broke the troop record after earning 31 merit badges in one year.

SALISBURY — Jared Hensley is a goal-oriented young man. In the fifth grade, he started playing the trombone, and now in the eighth grade, he’s holding down first chair for the all-county middle school band.

But it’s in Scouting where Hensley’s goal-oriented personality has really come through. He recently broke Boy Scout Troop 443’s record by earning 31 merit badges in a year. Longtime Troop Scoutmaster Henry Trexler challenged Hensley to go for the record, and that’s pretty much all he had to say.

By year’s end, Jared expects to earn an additional merit badge — this one for rifle shooting — and establish a new troop record of 32 for a year. Altogether, the 13-year-old has attached 64 merit badges to his green sash, and he already has earned his Eagle Scout award with a canned food drive that netted 6,000 pounds of food for Rowan Helping Ministries. With help from other Scouts and members of the Junior ROTC from West Rowan High, Hensley collected the cans over three nights at the Rowan County Fair.

“If it wasn’t for them (the ROTC members),” Hensley says, “it would have been a train wreck.”

Hensley wasn’t satisfied with just collecting cans and delivering them en masse to RHM’s pantry. He sorted out and boxed all the foods by category, saving RHM a ton of work on the other end.

Trexler, his Scoutmaster, says Jared is among a good group of Scouts who have been working hard on earning merit badges because they enjoy it and are having fun in the process.

“They want to do it,” Trexler says. “They are not being pressured to do it, and that’s what I want.”

In each of  the past three years, Scouts in his troop have earned more than 400 merit badges, Trexler says. Jared was one of the Scouts this year, who took advantage of summer camps and meeting with Trexler on Sunday afternoons to complete work on merit badges for which he already had partial credit.

As for Jared’s breaking the troop record for merit badges in a year, Trexler says he’s proud and happy for him.

“But for me, it’s not about the record,” Trexler says. “He’s got a good heart, and his mind’s in the right place. I’m always finding things for him to do.”

An eighth-grader at North Rowan Middle, Hensley has lived with his grandparents, Linda and Keith Hensley, since he was 5. He takes weekly lessons and practices his trombone at least 100 minutes a week. There’s also Scouting and all the activities that it entails, and he’s an “A” student.

Linda Hensley adds her grandson has had teachers who would not accept anything mediocre from him. Jared says his favorite subjects are math and English. He likes history, too, but he lodges a complaint.

“What they teach us in school — they leave out a lot of the good stuff,” he says.

There’s a bit of engineer in Hensley, judging from all the contraptions he has made out of Legos through the year. He shows visitors his working Lego bubble gum machine, which he designed, and an entire closet in his bedroom has been transformed to a Lego workshop. Linda Hensley says he’s constantly building things using motors and remote control.

Jared dived into music in the fifth grade as a member of Overton Elementary School’s Mini Funk Factory. This summer, the North Rowan High Band director invited Jared to play his trombone with the high schoolers. Jared attended band camp and practiced for playing at football games, but his grandparents decided he was just doing too much.

“We put our foot down,” Keith Hensley says.

Back to Scouting. Some of the favorite merit badges Jared has earned have dealt with theater, music, scuba diving, cooking, automotive maintenance and archery.

“I like the older kind of things,” he said.

His least favorite merit badges were probably personal management — because of all the paperwork — and citizenship of the world. Jared believes strongly in something you hear successful people say all the time.

“Things I like to do I get done, and I do them a lot better,” he says. “If it’s something you like, something you can relate to, you can write a four-page essay on it.”

A quartermaster in the Honey Badger Patrol of Troop 443, Hensley has a uniform weighted down by all of his medals, patches and merit badges. He also can spread  on the kitchen table all kinds of other patches, marking many of the activities and places he has been with Scouts.

Most every summer, Jared spends a week or two at Camp Barnhardt in Stanly County. And he loves to go camping with his troop, especially if it includes activities, such as the Highland Games, in which he participated this past weekend on the St. John’s Lutheran Church retreat property.

Hensley’s Scouting career started with the Cub Scouts at Sacred Heart Catholic Church, where he also earned a lot of awards, including the Arrow of Light.

Even though he has collected all of these merit badges and his Eagle Scout, Hensley says his work as a Scout is not done. He will continue going for merit badges that interest him “and helping out the younger Scouts,” he says.

To his neighbors on Yorkshire Drive, Hensley is sort of the All-American boy. Every morning, he grabs the newspapers in the driveways of three neighbors and hangs the bags on their homes’ front doorknobs.

Linda Hensley says her grandson’s tenacity was evident early. Fourth grade offered a good example, she says. Jared wanted to attend a weeklong NASA Space Camp in Huntsville, Ala., but without a scholarship to pay he expenses, he wasn’t going to be able to afford the trip.

His fifth-grade science fair project was a psychological experiment asking, “Does reward affect performance?” He tested his hypothesis using three mice in a maze. The reward for two of the mice was peanut butter topped with sugary sprinkles. The reward for the third mouse was just peanut butter.

But to use mice in the experiment, he had to first gain approval from science fair officials and a veterinarian, to ensure no harm would come to the mice. He did so, and that’s the project that won school, county and district awards and made it to state competition.

What’s on the horizon for young Jared? High school is , of course, and maybe the Scout adventure camp at Philmont in 2016. All his grandmother knows is one thing:

“Don’t throw a challenge in front of him,” she says.