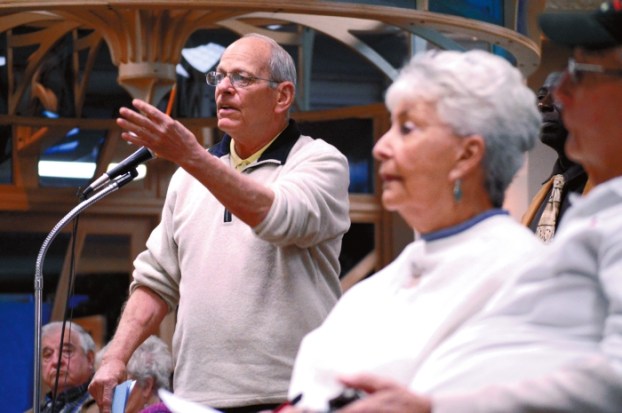 As part of a national initiative, W.G. Hefner V.A. Medical Center staff on Wednesday heard a bevy of concerns — long wait times, an inadequate phone system and parking issues — from local veterans during the second, quarterly town hall meeting at the medical center.

Secretary of Veterans Affairs Robert McDonald directed all VA facilities earlier this year to hold quarterly meetings following news of long wait times at various VA facilities, but more specifically at the VA facility in Phoenix. The first of Salisbury’s meetings was in September.

Green said veterans’ feedback received during Wednesday’s meeting is important for the facility to improve its overall care.

“We want to be the best healthcare system we possibly can be because our veterans deserve that,” she said.

Green said the W.G. “Bill” Hefner VA Medical Center is seeing considerably more growth than the overall average for the VA. As a part of her opening presentation, she said the Salisbury VA has seen 67  percent growth over the previous 10 years in the number of individual veterans visiting local VA facilities.

“That growth is continuing,” she said. “It’s not projected to slack off. Part of that is because North Carolina is a very veteran friendly state and we’ve got lots of veterans moving here from other parts of the country.”

She said the growth presents unique challenges and opportunities before updating attendees about outcomes of feedback from the September town hall meeting.

Another project included replacing the Salisbury VA’s telephone system, which was also a major concern brought up during Wednesday’s public comment portion of the town hall meeting.

“It’s one of our greatest challenges here,” Green said. “It’s probably the number two complaint I get right up there with parking.”

She said the Salisbury VA also issued a set of telephone etiquette rules to its staff, including being more responsive, polite and promptly returning voicemail messages.

Before getting to public comment, VA staff also talked about how veterans could get healthcare from community providers rather than through a VA facility. The ability to get care from local doctors comes through the Choice Act, which provided $15 billion to VA facilities nationwide. Green said she hasn’t yet received the exact amount that would be provided to Salisbury’s VA system, but she said it would be enough to hire 78 additional full-time employees.

Part of the $15 billion went to provide veterans access to healthcare through other, non-VA facilities. Another portion of the money went toward hiring additional employees.

To provide veterans with healthcare through the VA, local healthcare provides must enter into agreements with the VA, according to a fact sheet given out during the meeting. The Choice Act provides $10 billion nationwide for non-VA care. Each veteran in the system as of August 1, 2014 will receive a Choice Card, according to the fact sheet.

The majority of the meeting was devoted to allowing veterans to voice concerns about their experiences with the W.G. “Bill” Hefner VA Medical Center.

One of the first concerns brought up was the medical center’s telephone system. U.S. Army veteran John Miller said the telephone system is particularly an issue when he tries to communicate with his primary care team.

“I see what you’re doing with the telephone system, but when I call it goes to some phone bank in Kansas or whatever,” Miller said. “Trying to get the message to my doctor or my primary care team is extremely frustrating. We need to be able to talk to a member of our primary care team or at least the clinic.”

Miller also mentioned that he had a problem getting the extension number for staff members at the VA medical center.

“I asked for your office and the operators said they were prohibited from giving out any of the hospital administrative staff numbers,” he said about trying to get in touch with Green.

Other concerns including parking. Multiple veterans in attendance mentioned during the public comment portion that it seemed like the medical center’s staff was allowed to park closer to facilities than the patients. As a potential solution, Green mentioned a planned parking deck, which could start construction within 60 days. She said staff members would have a designated floor on the parking deck, likely the highest level.

Several veterans followed Miller, many using personal stories as a backdrop for a larger problem at the medical center. Each time a veteran expressed a concern about a particular issue Green asked a member of her staff with knowledge of the specific concern to talk with the veteran.

After expressing concerns, some of the veterans said they appreciated the care being provided at the medical center, but said small problems still exist.

“Personally, I’ve very satisfied with my primary care team,” Miller said. “But it’s just the frustration of being able to talk to them.”

By Wayne Hinshaw For the Salisbury Post MOUNT ULLA —  It might be even colder this morning, but last Friday night was... read more