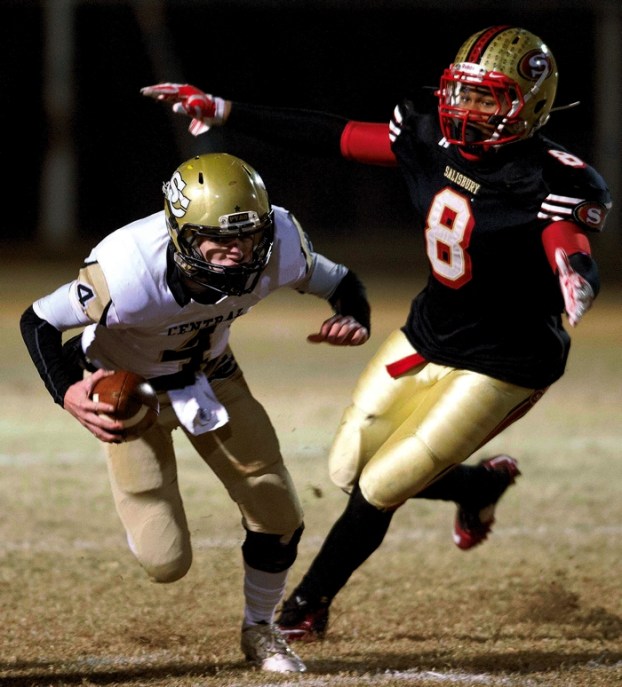 SALISBURY —  Salisbury beat Surry Central 14-10 on Friday, the lowest-scoring playoff victory for the Hornets since they beat East Henderson 16-10 to open the 2007 playoffs.

“A game like we had with Surry Central, it’s coming down to one play, one drive or one series,” Salisbury coach Ryan Crowder said. “Yes, we should’ve scored more, but when our defense had to do it, they did it.”

A lot of Hornets got it done, one big Hornet in particular— 6-foot-2, 224-pound junior linebacker D.J. Alexander.

“D.J. was all over the place,” Crowder said.

It was 7-7 in the middle of the second quarter. Surry Central had momentum after scoring on Alex Martin’s 85-yard run, and the Golden Eagles were threatening to take the lead. After a 42-yard burst by Martin, they had first-and-goal at the Salisbury 3.

“The defensive coaches called us all together and said we couldn’t let them score,” Alexander said. “A goal-line stand – we were ready for it. That’s something we work on every single day at practice.”

Surry Central is a hard-nosed team, nothing fancy. A running play was stopped at the 2, a bad snap moved the Golden Eagles back to the 4, and then Martin bulled to the 1.  On fourth-and-goal at the 1, Alexander led a swarm of Hornets that wrestled Martin down short of the goal-line. That stand turned momentum.

“That first-and-goal at the 3 was key — that’s where our defense just bowed up,” Crowder said. “Surry Central  had one play for 85 yards because we had a blown assignment on the defensive line on a play that should’ve gone for about  3 yards.

“But we were pretty much able to stop the things they wanted to do. You win the close ones with defense. That’s what we did. It was a lot like the Thomasville game.”

Salisbury scored the decisive points late in the first half when DB Darius Jackson yanked the ball away from a Surry Central punt returner and raced 70 yards for a 14-7 lead.

The Hornets (6-6) didn’t score after halftime, but they extended their season. Surry Central was hampered when Martin hurt an ankle, and the Golden Eagles were limited to a field goal in the second half. Alexander forced that field-goal attempt by leaping and batting down a third-down pass.

“It was a struggle all the way, but we never gave up,” Alexander said. “Our offense helped us out too. It was just hard to score.”

Alexander made 13 tackles and was in on four sacks.

“They sent me on some blitzes and I went through the line clean for the sacks,” he said. “We had pressure from a lot of guys. I just happened to be the one that got to the quarterback.”

Crowder said Alexander’s play has picked up in recent weeks.  He didn’t have a fumble recovery in the Hornets’ first five games, but then he had three in four weeks. He had 13 tackles against Thomasville and 11 against North Rowan in recent physical contests.

“His nose for the ball has really gotten better as the season has gone on, and he’s getting a lot of tackles each week,” Crowder said. “He’s got the things you can’t teach. He’s tall, he’s rangy, and he really moves well for his size.”

Alexander is impressively nimble for a big guy. He showed that last winter as an all-county basketball player.

Basketballs have started to bounce, and it’s a lot warmer indoors. The Hornets practiced Tuesday on the turf at Mooresville to get acclimated to the turf they play on Friday at Black Mountain Owen. It was 27 degrees and the wind cut like a knife, but Alexander was smiling. He’s enjoying this football season after last season’s 2-9.

“I hope we can play football until Christmas,” he said with a smile.

Seeded eighth in the 2A West bracket, the Hornets will be underdogs at No. 1 Owen. Owen’s Warhorses are undefeated. They haven’t lost since they fell at North Rowan in the second round of the 2013 2A state playoffs. The Warhorses scored 88 points in a first-round romp.

“They’ve got good athletes and they play with a lot of discipline,” Alexander said. “We’ll play our hardest, and see what happens.”

From staff reports Wingate’s men’s basketball team jumped to a 15-0 lead against Catawba and won 80-74 in the  SAC... read more