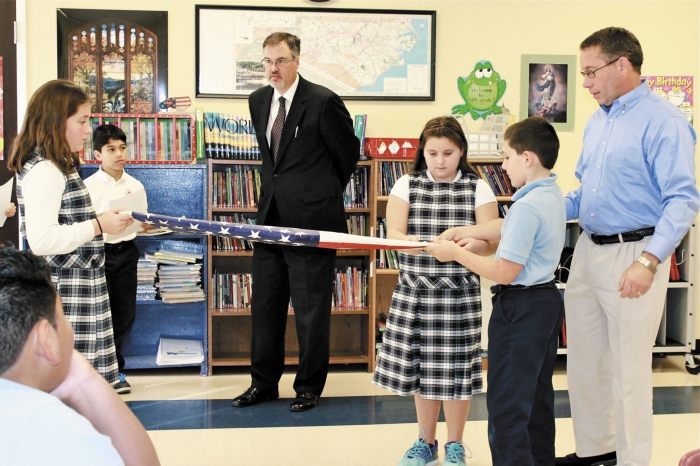 West Rowan High School’s ROTC presented the nation’s colors. Each Veteran in attendance shared their name, their branch of service and their years of service. The students gave all the Veterans “thank you” cards for their commitment and dedication to the community and to our country.

Retired Col. Robert Hackett spoke with the students about the meaning of Veterans Day and encouraged them to talk with Veterans to find out their individual stories.

After breakfast, First Class Sergeant Patrick Malloy and First Lieutenant Doug Smith visited classrooms to teach students the proper way to raise and hold the flag. They also taught the proper way to fold a flag and the meaning of each fold along with the reason to respect the flag.

State of the Region Education Summit 2014

A dialogue among Cabarrus County and Kannapolis City educators, community leaders and members of the business community will take place at the Davis Theatre in Concord Dec. 5 from 7:30 until 11:30 a.m.

The education summit will result in a better understanding of challenges faced by educators, needs of the business community for a qualified workforce and how both may be addressed by working together. The summit is presented by the Cabarrus Arts Council. Other sponsors include Business Today and Ben Mynatt Family of Dealerships.

Members of the South Rowan FFA Chapter in North Carolina were one of 40 teams participating in the National FFA Agricultural Sales Career Development Event held in conjunction with the 87th National FFA Convention & Expo in Louisville, Ky.

Members of the West Rowan FFA Chapter in North Carolina were one of 36 teams participating in the National FFA Agronomy Career Development Event, also held in conjunction with the 87th National FFA Convention & Expo in Louisville, Ky.

The National FFA Agronomy CDE is a competitive event that allows students to apply classroom knowledge to real-life situations. Participants’ knowledge of agronomic sciences was tested through several levels of competition including developing solutions for problematic scenarios; identification of seeds, insects, soil and crops, and other management practices.

Rousey is a senior at South Rowan High School, and is in the top 5% of his graduating class. As a cadet, Rousey has distinguished himself by attaining the highest rank within the Corps of Cadets and has been promoted to the top leadership position of SASAI. Additionally, Rousey is a key member of the South Rowan JROTC Raider Team. Aaron is an active member of his church, an Eagle Scout, and upon graduation, he plans to attend the Naval Academy of the United States, majoring in computer engineering and minor in business management.

The Legion of Valor is the oldest congressionally chartered veteran’s organization in the United States. It is made up of Veterans from all services who have received either the Medal of Honor or their respective Service’s highest award for gallantry. The award recognizes leadership, scholarship and community service.

Like its sponsoring organization, selection criteria for the Legion of Valor Bronze Cross for Achievement are very high, and recipients become part of a very exclusive fraternity. Rousey will be featured along with other recipients in the Legion of Valor journal, “General Orders,” which will be maintained as a permanent record in the Library of Congress.

Parents of the inductees and the entire faculty and student body of Gray Stone Day School were in attendance. Current National Honor Society members conducted the candlelight ceremony, focusing on the four cardinal principles of Scholarship, Leadership, Character, and Service. The ceremony was led by National Honor Society officers: Erin Ansbro, president; Taylor Earnhardt, vice president; Sandi Jusic, secretary and Matthew Chilton, treasurer.
The National Honor Society requires that a prospective member must possess a minimum 4.0 GPA and show evidence of achievement in three other areas.

On Monday, Nov. 17, students and faculty from Davidson County Community College, Livingstone College, and Rowan Cabarrus Community College met with Shawn Campion, President of Integro Technologies, and Ron Ledoux, Director of Sales of the East Region for KUKA Robotics, to gain a better understanding of cutting-edge technology, the machine vision and robotics industries, and possible career opportunities following graduation in the fields of engineering and business.

“We believe that it is vital to reach out to the young people of our community. We want to show them the array of career paths available in their chosen fields of study,” said Campion. “We also want students to know that cutting-edge technology careers are available right here in Rowan County.”

Students and faculty were not only introduced to these two industry leaders of Integro and KUKA, but were able to see how they work together. Campion showed a machine vision solution being built for a client using KUKA robotics from the initial computer-aided design drawings to the actual product on the Integro shop floor.

With over 2000 installations and more than 500 clients worldwide, Integro Technologies is an innovator in machine vision and system integration providing turnkey solutions, consulting, and support services for a wide range of industries.

Erwin Middle School will be holding their Scholastic book fair from now until Nov. 21.

Questions can be directed to Media Coordinator Lynne Robinson at 704-279-7265.