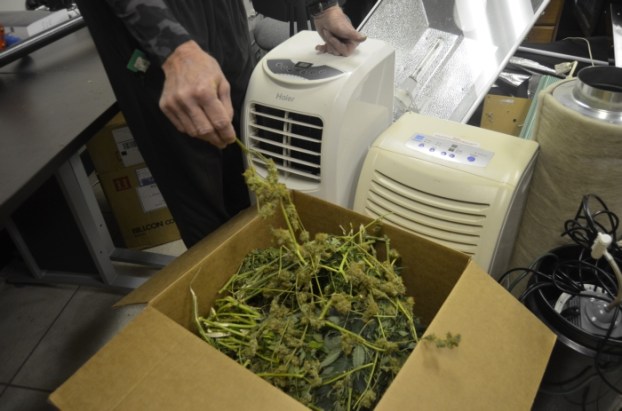 A Rowan sheriff's official shows marijuana that was confiscated from an East Spencer home on Tuesday. Two people were charged with trafficking marijuana in an elaborate growing operation. Other items shown in the photo including humidifiers were used in the process. Shavonne Potts/Salisbury Post

While on routine patrol, two East Spencer police officers, J.W. Wolfe and B. Major,  noticed a strong odor of marijuana coming from a home at 428 Division Ave.

Police Chief Baxter Michael said the officers could smell the marijuana coming through the vent in the patrol car. The officers followed the smell to the house, Michael said.

The officers went to the residence around 5 p.m. where they spoke with a Terri Jean Ball. When Ball opened the door, an officer could smell marijuana coming from the house and asked for consent to search it. Ball refused, a statement said.

The officer conducted a security sweep of the property and located Daniel Keith Peele in the backyard.

The East Spencer Police contacted the Special Investigations Unit with the Rowan County Sheriff’s Office to assist in the investigation. Detectives with the sheriff’s office obtained a search warrant and helped process the scene.

Once officials got into the house they discovered an elaborate growing operation that was located in two bedrooms and a bedroom closet. The growing operation was partially contained in two grow chambers that included high intensity lighting, air conditioning, dehumidifier and a charcoal filter to mask the odor of marijuana.

The chambers are made of a cloth-like material and vinyl,  similar to portable greenhouses.

Officials seized about 20 marijuana plants that weighed 11.5 pounds as well as equipment used in the growing operation. Ball and Peele each have a $100,000 secured bond. In 2000, Peele, also known by the nickname, Cue Ball,  was convicted in Gaston County for felony possession of marijuana. He was also convicted in both 2006 and 2012 of misdemeanor assault on a female. Peele has also been convicted of driving while license revoked and driving while impaired. Both remain in the Rowan County Detention Center.

“Our goal is to use all resources, all surrounding agencies to eliminate drugs to the best of our ability,” Michael said.

Michael said he was appreciative of the observant East Spencer officers and grateful to the Rowan County Sheriff’s Office for their assistance.