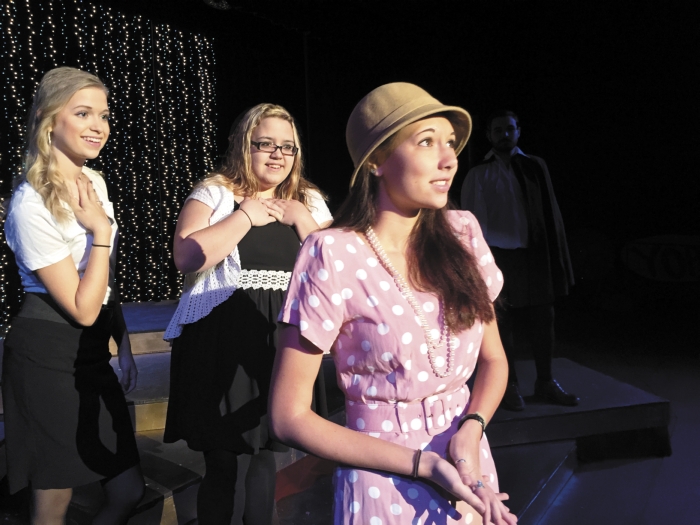 Lights…camera…action! Grab your flapper dresses and candlestick telephones, because Carson High School is traveling back in time to the Roaring 20s.

Shakespeare’s most famous fairies, Oberon and Puck – played by Austin Young and Sarah Hallett, respectively – have magically arrived on the Warner Bros. Hollywood set of “A Midsummer Night’s Dream.” Instantly infatuated with the glamour of show biz, the two are ushered on screen to play themselves.

With the assistance of a special flower, an erratic Austrian director played by Dillon Stevens, a love triangle and a glamorous Hollywood set, Oberon and Puck take on Hollywood with their own Shakespearian twist.

Hallett, a junior at Carson, brings Puck to life with her upbeat, modern portrayal of one of the world’s most noteworthy fairies.

“I think that Shakespeare in Hollywood is Shakespeare that everyone can enjoy,” says Hallett.

Patrick Moore, a sophomore at Carson who plays love struck director Jack Warner, adds to this by saying, “Carson Theatre is literally built on amazing people who work extremely well together. In being part of this cast, I’ve grown close to these people and it’s been a fantastic experience. I love the Carson Theatre program and the fact that I can be part of something so special, and share it with people who feel the same.”

Shakespeare in Hollywood opens this Friday at Carson High School at 7 p.m. and is fun for the whole family. There is also a showing at 7 p.m. on Saturday, as well as at 3 p.m. on Sunday. Tickets are $7 for adults and $6 for students and can be purchased at carsontheatre.com, as well as at the door.