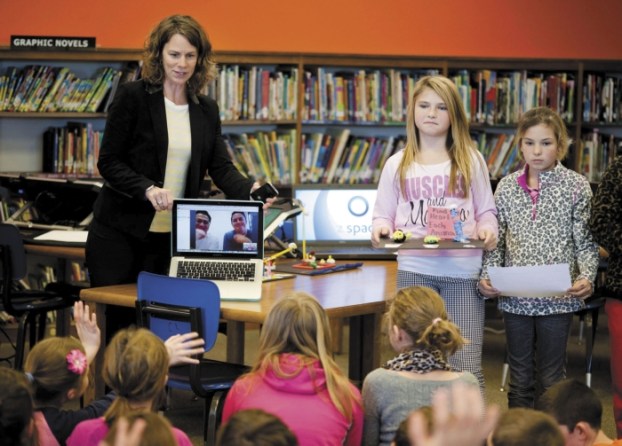 JON C. LAKEY / SALISBURY POST Elizabeth Lytle, a teacher from central California, established a video chat with zSpace engineers during a fifth-grade program in the media center at Bostian Elementary School on Wednesday. Students Victoria Storey and Nicole Trump (right) wait to make a presentation on the discoveries they made learning on new technology that was brought to the school. The fifth graders experienced using new 3-D technology to examine a various items in an exploded view.

“Their goal is to identify an area of learning that is difficult,” said Elizabeth Lytle, education director for zSpace.

The students, who each applied and did a project to be selected for the activity, were divided into three groups and started the morning by brainstorming the topics that they thought were the most difficult for elementary school students.

Then, they interviewed their peers, asking what specifically they struggled with within that topic and what would make it easier to learn.

“They learned what the user felt and needed to learn better,” Lytle said.

After they decided the topic that they wanted to work on, the groups sat down with the zSpace stations to get acclimated to the technology.

Each station looks like a computer monitor-sized tablet, and comes with special three-dimensional glasses and a stylus. Using different programs, students can not only view three-dimensional objects, but can manipulate them as well.

An image of a rhinoceros can be broken down so that students can see their muscles, bones and organs. An image of the human heart can be peeled apart, and the inner workings of the heart revealed – not to mention that the heart beat can be felt through the stylus.

Using beads, clay, pipe cleaners, cotton balls, bottle caps, fabric, tongue compressors and a host of other objects, the students then created physical prototypes for their own zSpace programs based on their focus areas.

Carys Roberson’s group decided to focus on atoms and molecules.

“They’re so hard to visualize because you can’t see them,” she said.

Their prototype started with the big picture and worked its way down. The group decided they should show what molecules every day items, such as water, are made of. In turn, they’ll show what atoms those molecules are made of, and what the protons, neutrons and electrons look like for each atom.

Alexis Morriswarr’s group decided to make a three-dimensional model of an Native American village, complete with sounds and structures that would have been present in a real village.

“They want to feel the past,” Lytle said, adding that from their interviews, they learned that their peers struggled to connect with history because they couldn’t understand how it felt to live in the past.

The last group worked on biology – animals to be specific.

Although zSpace currently has a software system in place with models of 250 animals, “they don’t move and they’re not in their natural habitat,” Lytle said.

The group worked on a prototype that expanded upon the current software and provided a broader understanding of the animals for their peers.

After they developed their prototypes, the students were able to video-conference with zSpace’s developers and share their ideas.