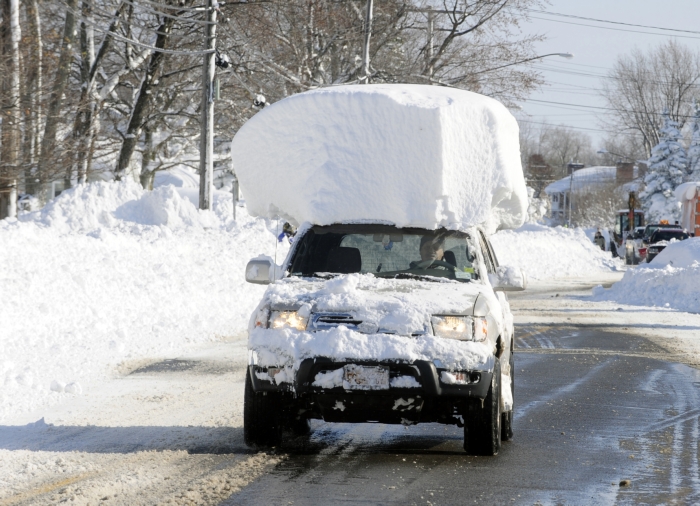 A vehicle, with a large chunk of snow on it's top, drives along Route 20 after digging out after a massive snow fall in Lancaster, N.Y. Wednesday, Nov. 19, 2014. Another two to three feet of snow is expected in the area. (AP Photo/Gary Wiepert)

1. OBAMA TO USE EXECUTIVE POWERS TO SHIELD AS MANY AS 5 MILLION FROM DEPORTATION

Republicans vehemently oppose the president’s immigration plan but are deeply divided on how to respond.

2. COSBY TO AP ON ASSAULT ALLEGATIONS: “WE DON’T ANSWER THAT.”

In a recent interview, the comedian refused to comment on the accusations he is facing then asked interviewer not to use that part of their on-camera conversation.

Police kill gunman who opened fire in a library at Florida State University.

The human rights organization says Turkey is shouldering the heaviest burden of hosting half of the estimated 3.2 million Syrian refugees.

5. HOW MUCH SNOW IS PILING UP IN BUFFALO

With an additional 2 to 3 feet possible, the one-week totals for the Buffalo area will approach the average snowfall for an entire year: 93.6 inches, or close to 8 feet.

The epidemic has put foreign adoptions from the region on hold while the number of children who lost their parents is rising.

7. WHICH SEARCH ENGINE HAS MOZILLA CHOSEN

Yahoo will replace Google on Firefox browsers in the hope of reclaiming lost ground in the most lucrative part of the Internet’s ad business.

Some agency execs argued that the surveillance exceeded the NSA’s mandate to focus on foreign spying, the AP’s Ken Dilanian reports. The dissenters were overruled.

The sister’s boyfriend confessed to killing the women, jealous that his girlfriend had danced with another man, police say.

10. WHAT THIS YEAR’S TURKEY FEAST WILL COST YOU

The average Thanksgiving meal will set an American family back $49.41 this year–a modest increase of just 37 cents over 2013.