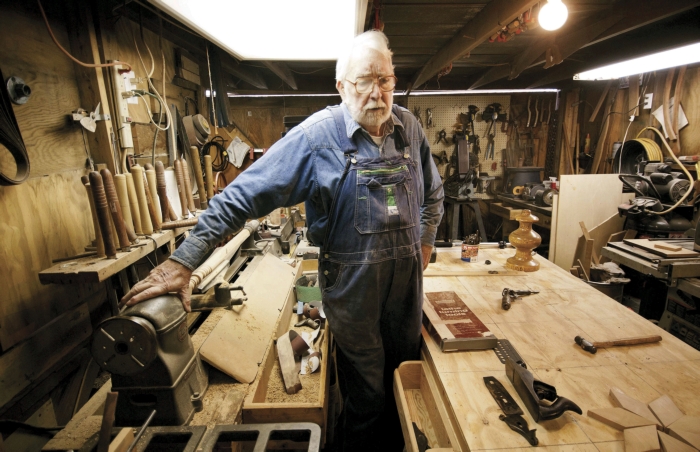 George Basinger talks about woodworking as he stands in his workshop at his home in Concord. Photo by Jon C. Lakey, Salisbury Post.

SALISBURY — George M. Basinger could talk. Boy, could he talk.

“I wear out telephones,” he said once in a newspaper interview in 2000.

Betty Basinger, his wife, says George actually missed his calling — he could have been a lawyer or a preacher. In reality, however, Basinger proved to be many other things. Above all, he was a blacksmith, who learned at the elbow of his father and other mentors and whose family tradition of blacksmithing went as far back as 1770 and his great-great-great-great grandfather, Johann Basinger.

But Basinger also was a traveler, woodworker, musician, trader, country weatherman and politician.

Basinger died at his home in Concord Sunday night at the age of 84. His health had been declining since he suffered a stroke almost two years earlier, Betty says.

As a blacksmith, George Basinger gained a reputation for making masonry tools, especially his specialty, the brick hammer. Up to a year before his death, masons would call Basinger and offer to pay him top dollar if he would make them one of his hammers.

“He was real proud of that,” Betty says. But  Basinger put his blacksmithing tools away when he closed his Webb Road shop in 1999, retired and moved to Concord. With almost as much enthusiasm, he then became a woodworker, converting a carport into his shop and spending hours turning out lamps, tables, headboards, frames, coat racks and even a grandfather clock.

He didn’t make the wooden things for money, just fun. He put whatever he built to use around the house or gave the things away. His designs often incorporated diamonds and stars.

Basinger was particularly proud of the replica he made of his home church, Grace Lutheran in Rowan County. It was the original Grace Lutheran he remembered as a boy — the church that had burned down March 30, 1947, just five days after his 17th birthday. He built it all from memory, including every architectural detail, down to a cellar door on the side.

“He was a very smart person, he really was,” Betty says.

Basinger taught himself how to play the piano because, as a kid, he couldn’t afford the 15-cent lessons. In retirement, he enjoyed playing a Kimball Fascination organ he bought in 2000, and he once traded a roll-top desk for an 1867 pump organ, which he rebuilt and loaned to the China Grove Historical Society.

More than anything, Basinger like to travel. By car, pick-up truck with camper and eventually RV, the Basingers’ travels took them to all 48 states on the continent and almost all the provinces in Canada. He once said there was hardly a road he and Betty hadn’t driven on between the Canadian and Mexican borders.

They also traveled to Hawaii, and in 1985, spent six weeks in Europe, logging 5,000 miles by train. No one could organize a trip like George, Betty says. Just after Christmas every year, he would start planning where they would go the next summer.

‘That was the thing he liked to do a lot — go places,” Betty said. “He loved to plan trips. That was his favorite thing.”

Basinger always had an opinion, especially on government, and he ran many times as a Republican candidate for the Rowan County Board of Commissioners. Despite candidacies in four different decades, he never won. Basinger acknowledged deserting the party briefly to vote for presidential candidate Ross Perot in 1996 .

A China Grove native, Basinger first attended school in Mount Ulla, but his family moved back to China Grove when he was about 10.  Basinger learned his early blacksmithing techniques from his father, Frank.  He shod his first horse at 15 and was skilled enough eventually to shoe a horse completely in an hour-and-a-half.

Basinger graduated from China Grove High in 1948, joined the U.S. Air Force and fought in the Korean War. During his stay in the military, he also attended classes in blacksmithing and welding. Not long after leaving the Air Force in 1954, Basinger relocated to Pennsylvania, where an uncle lived, and worked for a year in a helicopter factory near Philadelphia then two years for Westinghouse.

While working at Westinghouse, he struck up a friendship with an old blacksmith in Media, Pa. Within six months, Basinger took over the Rose Tree Blacksmith Shop, whose origins dated back to at least 1836.

Basinger and his first wife would have three children. In 1966, the family moved back to Rowan County, where Basinger bought a house on Webb Road and set up his Basinger’s Blacksmith Shop on the same property. For many years, the shop was distinguished by an 8-foot, 446-pound oak wheel out front.

Basinger found his niche making tools and shipping them to various places in the country. At his busiest, he had up to five men working for him.

Basinger divorced in 1974 and married Betty about three years later. Between Pennsylvania and North Carolina, Basinger worked as a blacksmith for 39 years and sometimes called himself “the last real blacksmith.”

“He liked to be around people,” Betty says. “He liked to make things, of course. The blacksmithing  — he was good at that. … He was messy in the house. He could make more messes than I could clean up.”

Basinger left his mark in many places. Grace Lutheran, where his memorial service will be held Saturday, is a good example. He made the outside mailbox, shaped like a church. He contributed things to the church history room, such as an 1880 pocketwatch he found in a shop in Hannibal, Mo.. The year was significant because that’s when Grace Lutheran was founded.

He donated a pair of lanterns sitting on either side of a church organ, and for each pew, he made candleholders brought out for the annual holiday services.

“”If he set out to do something,” Betty says, “he pretty much did it.”