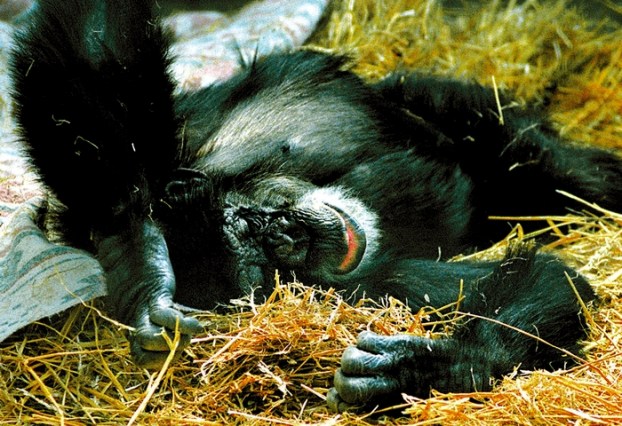 Jayson singe / salisbury post file photo Sydney the chimp was alive and well but sleepy after being sedated after he was captured. Seventeen years ago, he escaped from the Charlotte Metro Zoo, which is where Tiger World is located today.

Wineka column: Eva and the chimp

FAITH — For a week in 1997, no one made more news in Rowan County than an escaped chimpanzee named Sydney. A virtual dragnet of zookeepers, animal control officers, reporters and citizens couldn’t nab him — not until fifth-grade teacher Eva Millsaps made friends with him one morning in the backyard of her house off Faith Road.

Through the years, Millsaps has told and retold the story. Some people still walk up and ask her, “Caught any chimps lately?” At her 40th high school reunion this summer, she found herself regaling class members about Sydney again.

“It’s something I’ll remember for a long time,” Millsaps says.

If Sydney is alive today — and Millsaps thinks he probably is — he would be 36 years old. The last time Millsaps inquired about Sydney, he had been sold or given to a reserve for rescued animals in Texas. The place was designed to be open, where Sydney could live without being in a cage, she says.

After Sydney’s capture May 1, 1997, Millsaps had her 15 minutes of fame as the lady who captured him, but Sydney’s time in the spotlight lasted a bit longer. That June, he was the featured guest at Landis Heritage Day. He then served as grand marshal of the Faith Fourth of July parade.

The day he returned to Charlotte Metro Zoo,  Sydney bit a WBTV cameraman in the arm. The bite tore into a tendon and required surgery. The cameraman missed a lot of work from the injury and ended up slapping Charlotte Metro Zoo (where today’s Tiger World is located) and then owner Steve Macaluso with a lawsuit.

A Rowan County woman, Michele Fife, also won a judgment against Charlotte Metro Zoo in small claims court for $1,200, meant to cover the damage Sydney caused to her 1993 Oldsmobile. Sydney jumped on her car while she was near a roadside fruit stand off N.C. 152 the day he escaped.

Some Rowan County taxpayers also grumbled when they heard it cost $4,988 to hunt for Sydney the week he was on the lam. During the search, county officers drove 1,344 miles  looking for the chimp. They also logged 115 regular work hours and 173 overtime hours in the hunt.

Sydney’s escape — he pried open the metal around his cage door at the zoo — led to the county’s passage of an exotic animal ordinance, making sure the public safety is foremost against “inherently dangerous” animals.

Sydney’s escape created a media frenzy for a week, all kinds of Sydney sightings and just as many ideas on how to capture him. The Post jumped right in with maps showing where Sydney had been spotted, eyewitness accounts and cute headlines such as “”Show me the monkey” and, at his capture, “Escaped monkey cries uncle.”

Sydney, who weighed 150 pounds, showed up at places such as an old barn on Parks Road, a brick home on Rimer Road and a mobile home near Crescent Heights in Rockwell. Television helicopters were on the lookout. Snacks of M&Ms and Pepsi were set out to trap him, and the Pepsi was laced with a depressant aimed at slowing him down. It didn’t work.

At one point, Macaluso tried to lure him out with Rita, a 100-pound chimpanzee from the zoo who was in heat. He resisted her feminine wiles.

Back in 1997, Millsaps was in her last year of teaching at Rockwell Christian School, and about 7 a.m. on May 1, she prepared to open the back door for her dog when she noticed Sydney walking between her house and a neighbor’s property, going toward Faith Road. She called out, “Sydney!” to get his attention and quickly ducked back inside to call 911.

Sydney was on her patio by the time she returned. Millsaps remembered she had some apples in her refrigerator. When she threw the first apple toward Sydney, he caught it like a baseball and ate it quickly. Millsaps kept throwing him apples and worried what her next step would be when the apples were gone.

She called her principal to explain why she would be late for school and returned to Sydney by walking up to him with one of the last apples. Today, Millsaps acknowledges how oblivious she was to the dangers an aggressive chimp might pose to her.

“I was blissfully ignorant, so there was no fear.,” she said. “… I had no clue they could rip people’s faces off.”

Sydney accepted the apple, and shook her hand. He also pushed up a sleeve and groomed her arm, then combed his fingers through her hair.  “He was just very, very gentle,” Millsaps says.

As the minutes passed, Millsaps kept wondering where the authorities were. Several times, Sydney walked off toward the woods behind her house, but she would walk after him and lead him back. To pass the time, Eva and Sydney also walked around the yard and sat on the front porch.

It was about 9 a.m., and still nobody had shown up to take Sydney back to the zoo. She learned later that Macaluso had driven by her house about 7:30 but chalked it up to  one of the many false reports when he didn’t see Sydney or anyone else. Millsaps called 911 again, and received a quick response after the second call.

Sydney jumped into Macaluso’s arms and into his car for the ride back to the zoo.

Eva and Sydney became best buddies for awhile. Every afternoon after school, she would travel to Charlotte Metro Zoo and take him apples and popsicles. She recalls that Sydney was back in a cage with Rita but wanted nothing to do with her.

“She did not like me,” Eva adds of the jealous Rita. One day, Rita grabbed Millsaps by the hair and slammed her face against the cage in a tantrum. She took out a handful of Eva’s hair.

Millsaps says Sydney was quite smart and obviously had lived with a family before being sent to a zoo. She had heard Sydney grew up on a farm in the Midwest, where he slept in a bed, and ate at the table with the rest of the family. He used a cup from which to drink and ate from a plate with a fork, knife and spoon.

At the zoo, Eva saw him use these same things and identify each one by name. Sydney also had been responsible for chores on the farm, which might explain what he did on Parks Road while he was on the loose.

Millsaps said a man she talked to said Sydney had gotten on his riding lawn mower in his yard and tried to start it. When it would not start, he hopped off the seat and checked the gas tank to see whether it had any gasoline. A hoe also was lying in the man’s yard, and Sydney picked up the hoe and started digging in the garden, Millsaps says.

Today, Millsaps serves as activities director for The Meadows in Rockwell a couple days a week. Otherwise, she and her sister paint houses for a living.

The Millsaps family had a hint Sydney was close by the night before Eva’s morning meeting with him. When they returned home from church about 9 p.m., a helicopter was flying overhead with a spotlight directed into the woods. As a joke, Millsaps’ husband, Billy, went to the backyard and let go of his best Tarzan yell — as if he were the famous jungle man calling Cheetah, his chimp.

So if anyone should get the credit for bringing Sydney in it should be Billy, right? Eva won’t go that far, but Billy’s part of her story that keeps getting better with the retelling.

Sybil Penninger Baker, who was a member of the last class to graduate from Rockwell School in 1959, provided this... read more