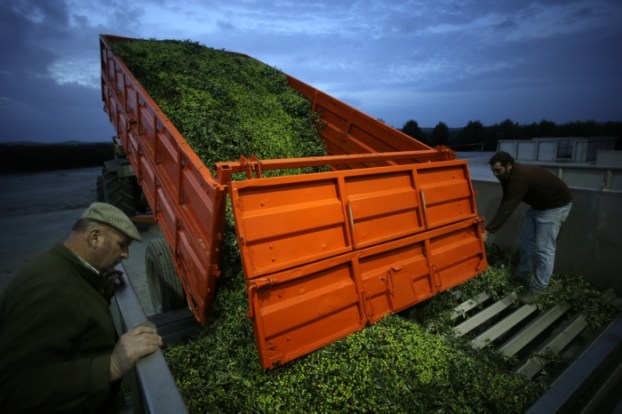 In this picture taken Tuesday, Nov. 11, 2014, workers unload harvested olives from a lorry in a oil mill in a farm near Evora, in the Portuguese region of the Alentejo. Portuguese growers are doing what the French have done: harvesting earlier and faster than usual before any more is lost. Since mid-October, a month earlier than usual, crews have been hurrying through the long ranks of olive trees that stretch to the horizon. (AP Photo/Francisco Seco)

Prime Minister Netanyahu vows to respond harshly to the killing of worshippers which Palestinian President Abbas has condemned.

2. HUNT CONTINUES FOR 60TH VOTE IN FAVOR OF PIPELINE

Fifty nine Senators have vowed to support the Keystone pipeline in a vote that will advance the measure today.

More and more couples are celebrating their nuptials in public in the country’s capital, Monrovia, after the recent drop in infections.

4. WHO HAS MARRIAGE PLANS

Mass Murderer Charles Manson has received a license to wed a 26-year-old woman who visits him in prison.

Ray Mabus racked up the miles, and more than $4.7 million in costs, on 40 official trips in the past five years.

A cool summer and abundant rain are affecting the harvest in Mediterranean Europe which may push olive oil prices up.

7. MIDEAST VIOLENCE STANDS IN THE WAY OF IRAN NUCLEAR DEAL

President Obama could secure the goal of improved relations with Tehran–but the disagreement between both countries over the Syrian conflict is an obstacle.

8. STATE OF EMERGENCY IN FERGUSON, MISSOURI

Gov. Jay Nixon activates the National Guard ahead of a grand jury decision on whether a white police officer will be charged in the fatal shooting of a black 18-year-old in the St. Louis suburb.

Unlike Obama’s planned moves in a divided Washington, amnesties agreed to by Reagan and George H.W. Bush took place amid a sweeping, bipartisan immigration overhaul.

10. HOW A PENNSYLVANIA MOM WANTS TO GET GIRLS INTERESTED IN SCIENCE

Software engineer Kelly Mathews is teaming up with a nonprofit that aims to bridge the gender gap by teaching school girls about tech careers.

Thomas Cobb: Deep frying is the way to go

By Thomas Cobb Rowan Cooperative Extension   Thanksgiving is a holiday that, for most people, the main ingredient is turkey.... read more