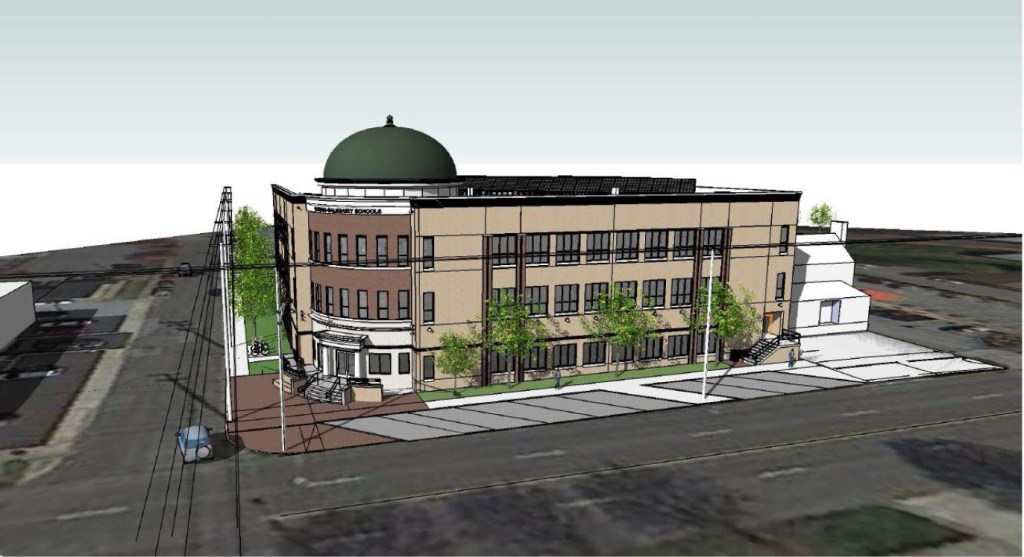 A rendering of the Rowan-Salisbury School System's new central office building planned for the 500 block of N. Main St. in Salisbury.

Rowan County’s Board of Education wants the city of Salisbury’s assistance with $1 million worth of work related to the construction of a new central office for the school system, according to a letter from Board Chairman Richard Miller included in council’s agenda packet for Tuesday’s meeting.

In the letter, the school board is requesting in-kind contributions from the city for work on parking lots, storm drainage, sidewalks and other items. Also included in the request is the installation of a metal dome on the top of the central office. The letter states the cost of installing the dome is $341,000.

The “total request” is for $1.02 million of in-kind contributions from the city.

“Assistance, from the City of Salisbury, … would be paramount to the successful completion of the Rowan-Salisbury Schools Central Services project,” the letter states.

The Board of Education approved construction bids for the central office on Nov. 6, and City Council supports the plan to locate the building near downtown.

Council, which up to now has not approved any money for the central office, will hear a presentation from the school system Tuesday.

In other business Tuesday, council will:

•  approve a final summary for the denial of a special use permit for the West End Plaza, which was requested by the county.

• receive a presentation from the Community Appearance Commission regarding the 2014 BlockWork Neighborhood Improvement Project.

• consider authorizing the mayor and city clerk to execute a municipal agreement with the North Carolina Department of Transportation regarding sidewalks along South Main Street from D Avenue to Rowan Mill Road.

• consider a request for temporary use of the public right-of-way for closure of the outside lane of westbound traffic and the sidewalk in the 200 block of W. Innes St. from 9:00 a.m. until 4:00 p.m. on weekdays beginning Dec. 1 and ending Dec. 31 for construction at St. John’s Lutheran Church.

• consider awarding a contract in the amount of $498,985.05 to Sutphen Corporation for the purchase of a pumper truck for the Fire Department.

• receive a presentation from staff regarding Parks and Recreation Department  staffing, facility improvements, and new events and programs.