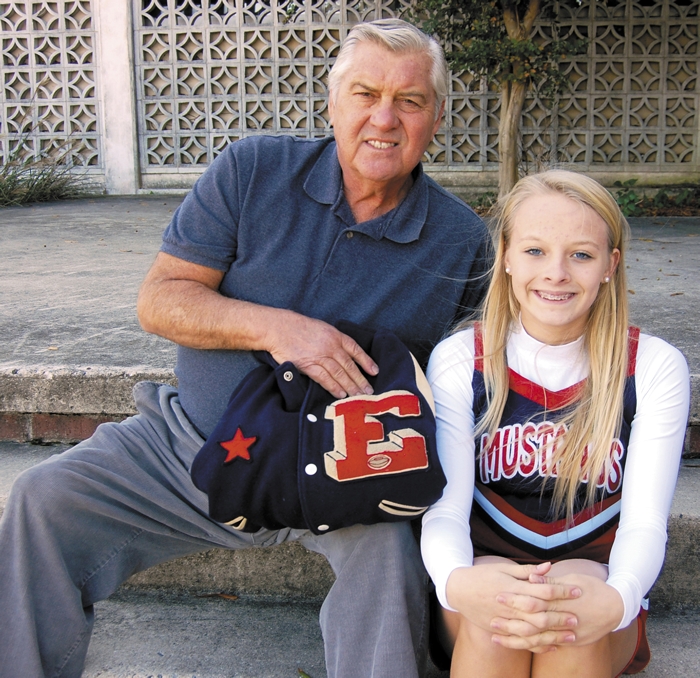 It might seem a little old fashioned, and rightfully so – Earnhardt graduated from East Rowan in 1962.

The girl who now wears his jacket is his granddaughter, Victoria Trexler.

Trexler is a freshman at East Rowan this year and is a member of the junior varsity cheerleading team.

“I just had it in a closet all these years,” he said.

Earnhardt got the jacket in 1960 – the first year East Rowan athletes could get a letterman jacket.

The navy jacket fits over Trexler’s shoulders loosely, with gold stripes on the shoulders and a red and gold “E” adhered to the left chest.

“Back then, they gave you stars,” he said, pointing to the red felt star that adorns the right chest of the jacket.

The star shows that he was on the varsity team.

Earnhardt spent one year on the school’s junior varsity team before spending his final three years as a fullback on East Rowan’s football team.

Although they never won a championship while he was a student, Earnhardt said the team had a great coach and great players.

“We had the best coach in the county,” he said. “It’s embarrassing, really.” “We had some really good players,” he added.

Trexler spent two years on Erwin Middle School’s cheerleading squad before she made it on East Rowan’s squad.

Earnhardt said the two of them are “real close.”

Over the summer, she spent time boating and fishing with him on the river. Trexler and her older sister have both also spent time helping Earnhardt with his furniture refinishing shop.

“They got to know antiques,” Earnhardt said. “She just took to it.”

Initially, he planned to give it to her sister, but Earnhardt said the two have night and day personalities, and that he knew it would mean more to Trexler.

Trexler said plans to wear the jacket to games and hopes to pass it on to her own children some day.

“I just thought it was a pretty good honor,” she said.

Other than a few moth holes, the jacket is in great shape.

Earnhardt’s sister-in-law is doing some restorative work to the jacket.