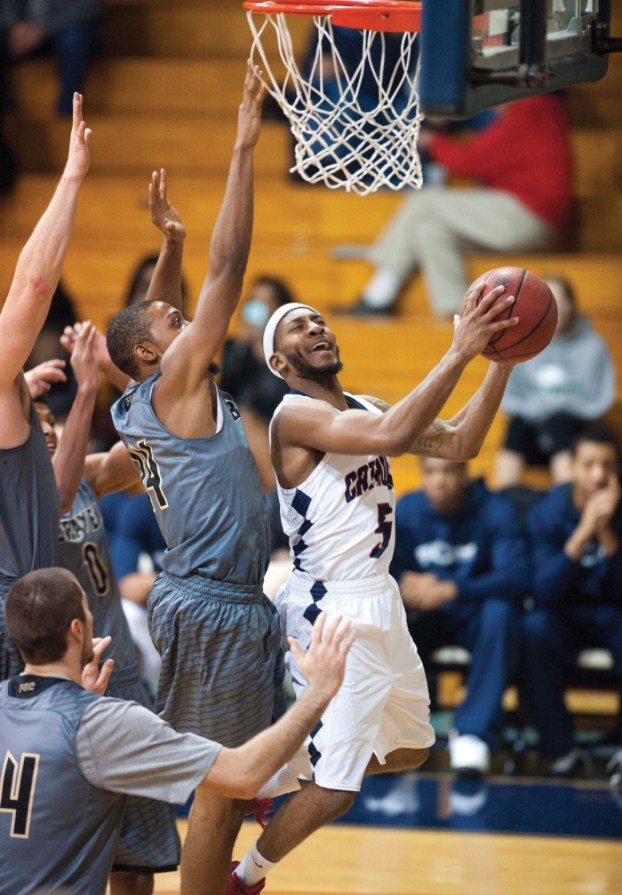 Watts lights it up against Catawba

SALISBURY — If the UNC-Pembroke men’s basketball team was looking for trouble Saturday night, it came to the right place.

From start to finish, the visiting Braves had their hands full with Catawba in the SAC/PBC Challenge at Goodman Gym.

“They’re going to win a lot of games,” UNC Pembroke coach Ben Miller said after his team escaped with an 82-75 victory and a two-game weekend sweep. “They’ve got great team speed and skill and they present tough match-ups at every position. We’re not looking forward to playing them again.”

Catawba (1-1), a decided underdog, had none of that fresh-out-of-the-box look you’d expect this early in the season — a credit to first-year coach Rob Perron.

“Oh, we love him,” junior forward K.J. Arrington said after shooting 9-for-13 from the floor and netting a team-high 21 points. “It’s how he approaches the game. Every day, every practice, we’re learning something. He teaches all the time.”

Saturday, the Indians learned how to hang around with a taller, deeper team. They shot 48 percent from the field in the first half and led by as many as six points on two occasions before descending to their locker room with a 36-34 halftime edge.

“Our No. 1 goal is to attack on every play,” said sophomore guard Rakeen Brown. “We focused on taking control of the game. I knew they were going to come in here and try to win. Our job tonight was to defend our house.”

They nearly did. For the second straight game Catawba made 11 3-pointers, including Jameel Taylor’s clutch long ball from the left corner that drew the Indians with 69-68 with 2:15 to play. But UNCP guard Brandon Watts answered with one of his five 3-pointers just seconds later and the Braves converted 10 of 10 free throws in the final minute to cement the outcome.

“He made some really tough pull-ups and we lost him a couple of times,” Perron said. “But some of his 3s — there was one that hit both sides of the rim, another that went straight up and the basketball gods might have tipped it in. Still, he’s a very good player who found some space and a way to get fouled. You put someone like him on the line and 25 points becomes 35.”

Watts, a  Weddington High School product, shot 11-for-16 from the field, 10-for-11 from the line and topped all scorers with 37 points. Arrington was asked what kind of obstacle the 6-foot-4 freshman presented.

“He’s not a tough assignment,” Arrington said. “He had a good game because he hit contested shots.”

Perhaps the verdict was sealed with 54.9 seconds hanging on the clock. Catawba trailed 72-68 when Arrington was called for a charge while driving down the left side. “K.J. was just attacking, trying to make a play,” Perron said. “And we always say go strong and try to make the right read, maybe for yourself, maybe to clear it for somebody else. I thought we did that for the most part.”

NOTES: Brown finished with 18 points and eight assists while teammate Jerrin Morrison harvested 17 points and eight rebounds from 24 minutes off the Catawba bench. …. The Indians host Wingate at 6 p.m. Wednesday.

By Paul Schenkel The Morganton News-Herald MORGANTON — On the road, as the big underdog, with a kicking game that... read more