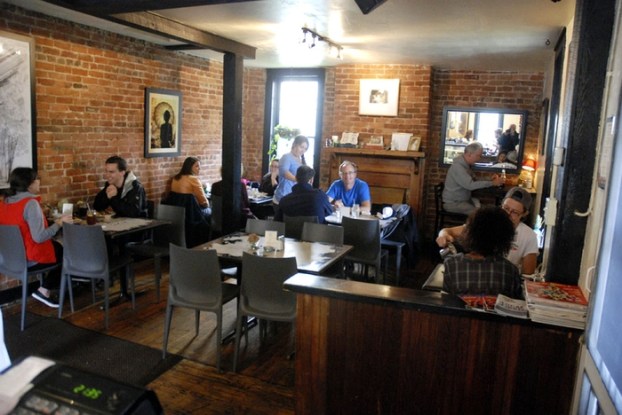 Plenty of seating -whether inside or outside – exists at Proper in downtown Boone. Photo by Ken Ketchie, High Country Press.

BOONE — Angela Kelly owning a restaurant that serves some of the staples of Southern food such as fried chicken and catfish, shrimp and grits, biscuits and gravy and collards seems fitting – proper even.

Kelly grew up in Salisbury, the seat of Rowan County that tourism officials call “Authentic North Carolina” and a charming Southern destination. It’s where she grew up eating and learning how to cook the style of food she now serves at Proper.

Even today when Kelly walks up the front steps of the old jailhouse building on Water Street and into Proper and that smell of her grandmother’s kitchen hits her senses, it takes her back to when her grandmother had the pots jumping.

“It doesn’t matter if I had eaten or not. As soon as I would walk in, I would want to eat something,” Kelly said. “It’s the same thing here.”

Before she opened Proper in Boone on May 1, 2010, she researched restaurants with longevity, and those always seemed to her to be BBQ joints and Southern food establishments. With her research, background and the fact that downtown Boone didn’t have a similar-styled restaurant, this seemed like the perfect niche to fill.

“That’s how the Southern aspect all came about,” Kelly said.

On the restaurant’s website is a definition of proper: respectable, correct and genuine. The name and that rendering, of course, allude to Southern hospitality and a simplistic authenticity that Kelly strives for with her restaurant and most of the dishes served.

“I wanted it to be about the food more than anything else. I wanted the meatloaf to be meatloaf, and I didn’t want to put anything in it that would surprise anyone – and I wanted it to be delicious at the same time,” Kelly said. “Salt, pepper, butter, cream … we like to keep it simple.”

The atmosphere in the old jailhouse is comfortable, relaxed and friendly. In addition to indoor and covered front porch seating, tables are set up outside in the garden-like patio looking out into downtown Boone. Kelly noted that folks will come for lunch or dinner and “just chill here for hours, which is great.”

“Sometimes I’ll be in the kitchen and hear people laughing in the dining room. I love that, and I don’t mind people coming here and hanging out. I love it,” Kelly said. “Families getting together and going out and just staying here for hours and talking and catching up, sometimes it feels like I’m at my grandmother’s house.” Some of the patron’s favorite sides and entrees of the restaurant include collards, which surprised Kelly, and mac and cheese and fried chicken, which Kelly said was expected.

Kelly is big supporter of the local food movement and its benefits to the environment and the local economy. While she noted that local foods are sometimes more expensive because they aren’t grown and sold at a ridiculously large-sized scale, she said that people have been “willing to pay that extra bit” for local products.

In addition to support local food production, Proper also supports local nonprofits. One Wednesday each month, Proper donates a portion of the day’s proceeds to a local organization, mostly those that are food based. Last month it donated money to the Health and Hunger Coalition, and this month it plans to donate to the Mabel School Food Pantry. For details on upcoming Wednesday donation days, check out the restaurant’s Facebook page regularly. This summer, Proper began catering. Folks can choose custom menus or pick from Proper’s standard menu. So far it’s had three catering gigs since the start and a wedding is planned on the steps of Proper this Sunday. While Proper will cater a wedding in Land Harbor next summer for 250 people, she noted that she’d like to keep capacity to about 150 people if no kitchen is on site.

“We started this summer, and they’ve been very successful,” Kelly said.

Proper is now in its fifth year, and Kelly praised her staff, many of whom have been with her since the beginning or started three years ago.

“I am really appreciative of my outstanding group. I feel really lucky to have them,” Kelly said.

Recently, a friend of Kelly who is a master gardener was talking about gardening – and it got Kelly to thinking about her startup business.

Now, she says, Proper finally “feels like a real, local business” that has a great chance for longevity – just like those she researched – because of the locals and visitors that support it every day. All that is needed now is few more parking places.

Proper is located at 142 S. Water Street off of King Street in downtown Boone. For more information, click to www.propermeal.com or call 828-865-5000. Wineka column: The love story of Marvin and Julia

SALISBURY — Marvin Wood and Julia Slade first took notice of each other as they passed in the halls between... read more