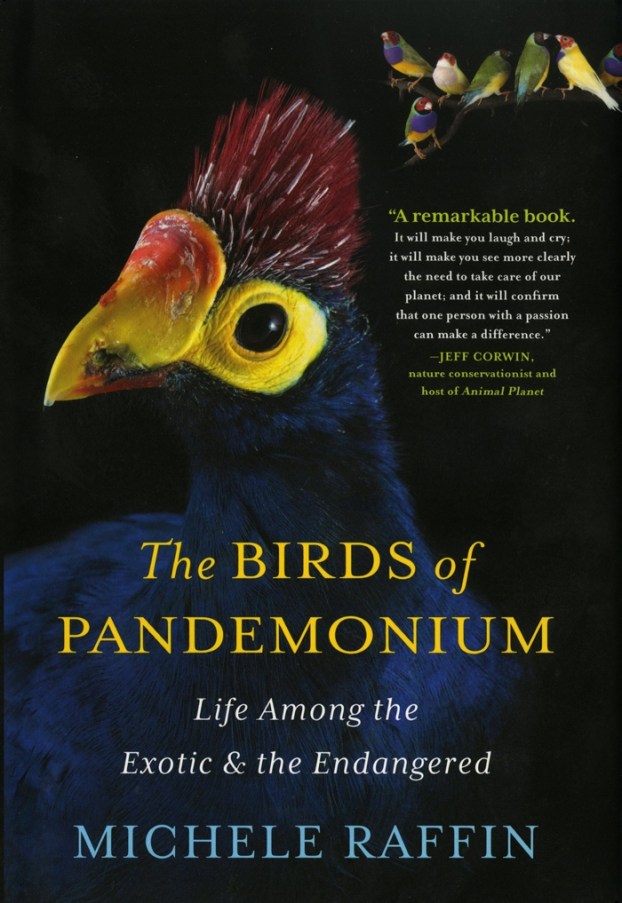 Pandemonium is just the place birds want to be

Some people are suckers for animal stories, especially ones involving a rescue. Look at the steady stream of rescue stories that show up on Facebook.

The publishing world knows this, and is very fond of animal books.

Still there’s that group who is afraid of animal books and the many  sad endings.

Fear not, Michele Raffin has written a positive, personal book.  “The Birds of Pandemonium” is her memoir – no, the birds’ memoir – of her sanctuary turned non-profit mission, known as Pandemonium.

Pandemonium reigns in Raffin’s back yard. It’s also the collective noun for a group of parrots. What starts as an injured dove on the edge of the road becomes an obsession and a mission, one that Raffin pursues with passion and intense focus.

That one dove turns Raffin on to the plight of untold numbers of rare, exotic and endangered bird species, from the very showy Victoria Crowned Pigeon to the flamboyant parrots and turacos. She rescues personable finches and finicky macaws and lorikeets and parakeets and the extremely endangered green-naped pigeon pheasants, or GNPPs, as she calls them.

Soft touch? Raffin has it, and the required soft heart, which eventually develops into a brave heart. She’s not a vet, not a breeder intent on making money. At first, she’s the rescuer of abandoned or injured exotic birds. She rescues Amigo, a red-headed Amazon parrot, from imminent death at an animal shelter. There, Amigo has a nasty bite and bad attitude. At home, he falls for Raffin’s son and isn’t happy unless he’s around.

Many bird species mate for life, and when one of the pair dies, or is separated from their mate, the grief can be deadly. Raffin has to play the mating game with a number of her birds, just to keep them healthy and happy.

Parrots and macaws need interesting toys and activities to be happy birds, much like young children. They need perches, nest boxes, hiding places and somewhere to get out of the cold. They need safety from predator birds, and special food — Raffin starts her own mealworm production – and the right material to walk on and nest in.

Is it all worth it? She certainly thinks so. From tiny Oscar, a Lady Gouldian Finch who cannot fly, to Ferguson, a large, noisy East African Crowned Crane, she finds affirmation and the reward of understanding more about the bird kingdom.

Oscar comes to her looking pathetic and sickly. She treats him, keeps him close and then introduces him to her flock of zebra finches. They love Oscar. Oscar loves them, but Raffin discovers he cannot fly. So Raffin decides to build him a ladder. She has bits of twig and wood, and Oscar gently hops up, then looks toward where he wants the next perch. One day she finds him snuggled on the next to highest perch with the other finches.

She has dozens of stories like Oscars, and sad stories, too, of rescued birds she did her best with, only to see them fade and die. Raffin has a huge mishap with a man hired to do consruction, who feels birds should be free. She finds breeders unwilling to help her because they are so protective of their secrets.

When she comes to the realization she can no longer accept every sad bird story and every sad bird, she decides Pandemonium needs to be a sanctuary and breeding site that will focus on saving rare species and nurturing new members of the flock.

It makes for a fascinating little book. The birds are bristling with personality and lessons Raffin takes the time to learn. Her care and careful, focused understanding make her the hero to a lot of birds and a lot of people who want to save disappearing species.