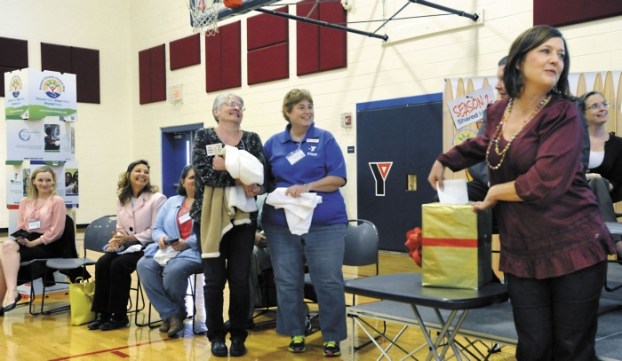 Nancy Goodson was the winner of a new Chevrolet car in the Rowan United Way Campaign. She stands, in the center on the left, with Louise Klaver who was the runner up for the car. Michelle Patterson on the right is drawing the winning name. photo by Wayne Hinshaw, for the Salisbury Post

The Rowan County United Way concluded its fundraising campaign with a celebration Friday.

And it had a good reason to celebrate.

The final amount was announced during the campaign’s finale at the J.F. Hurley Family YMCA.

“It’s a great pleasure to work with these people,” Dunn told the crowd as the campaign team stood with him on the podium.

The money raised through the campaign will fund those agencies next year.

Jackie Harris, with the United Way, said she’s thankful for everyone who donated this year. She also expressed her gratitude for the work Dunn has put into the campaign.

As part of the campaign, people who’ve donated $52 or more have their name put into a drawing for a free car. This year’s winner was Nancy Goodson of Rufty-Holmes Senior Center. The dealership drawn for the car was Team Chevrolet.

Wilson Cherry, with Rowan Vocational Opportunities Inc.  was honored with the “Jackie” award for his work during the campaign. The award is named after Jackie Harris.

“The hand that’s extended to give is always in the best position to receive,” Wilson said.

Speaking about Wilson, Dunn said, ” I look at him as an inspiration.”

Wednesday evening was flu shot time at Rowan Helping Ministries. As the clients entered the building for the evening meal,... read more