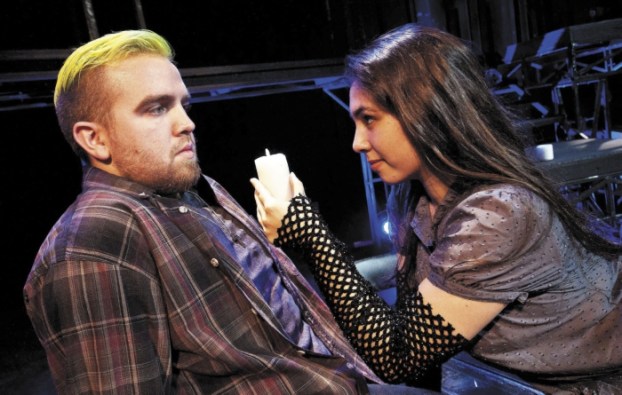 JON C. LAKEY / SALISBURY POST Pen Chance and Larissa Garcia recreate a scene from the musical RENT. The Catawba College Theatre Arts Department and Lee Street theatre are joining together for a dual venue production of the Tony Award-wining rock opera, RENT. The production is co-directed by Beth Homan and Justin Dionne.

The combination of Catawba College’s theater department and Lee Street theatre proved to be a great idea Thursday night as “Rent” opened for a two-week run, one week at Catawba and one at Lee Street.

Directors Beth Homan, of Catawba, and Justin Dionne, of Lee Street, set themselves a big task: Bring the New York musical from the 1990s to life in little Salisbury in 2014.

A strong cast did them proud. “Rent” is really about being together to fight the battles and celebrate the victories; there is a core group of actors and a cohesive ensemble.

Will Church as Mark Cohen and Pen Chance as Roger Davis are the nucleus of the group. Church, who is studying video game development at UNCG, has played the roll before. Chance is a senior at Catawba, majoring in theatre arts administration and minoring in music.

The wonderful thing about Catawba productions is the students are training to become professional actors and that training shines in “Rent.”

Phillip Lynch’s rich voice in the role of Tom Collins is a pleasure and when he reprises “I’ll Cover You” in Act Two, he brought much of the audience to tears.

His partner, Angel, wins the audience over with his insouciant drag queen. Terrell Jones is another Catawba student, a a large man, who plays Angel with a surprising softness.

Justin Davis is the hard-to-like landlord for some of the group, Benjamin Coffin III. He’s from Salisbury and has been in “The Color Purple.” He’s got a streetwise, power hungry air about him just right for the landlord who’s been there and is trying to get out.

Another pleasure on stage is Karina Moran, whose voice and body language create an impressive Joanne, lover of the sexy and vivacious Maureen, a performance artist played by Emily Olszewski, another Catawba student, Olszewski comes across as the girl who wants to live every minute to its fullest.

Larissa Garcia plays Mimi Marquez, a young exotic dancer and junkie who manages to melt Roger’s frozen heart. She is just 18, but went to a performing arts high school and has lots of stage experience. Her sometimes sweet, sometimes seductive, sometimes scared Mimi is an example of broken promises.

The ensemble plays everything from the homeless people camped in a lot next to Mark and Roger’s run down building to police officers, to characters’ parents.

They wander through the theater asking for food or money or sympathy, then make a powerful supporting cast during big musical numbers.

There’s one song that will stick in your head after the show, and it doesn’t really have a name — 525,600 minutes measure a year of life and love, no matter what your status is.

Other numbers are strong, such as “Today 4 You” and “La Vie Boheme” in the first act and “Take Me or Leave Me” and “Your Eyes.”

“Rent” addresses topics we don’t think about so much in the new millenium — the incredible toll AIDS took on not just the gay community, but on a whole generation of men and women. New York City has a huge homeless population, including people who can work, but cannot afford a place to live, who might be scraping by, only to be knocked down by the next set of bad circumstances. New York may be full of opportunities, but it has its fair share of broken dreams and lost souls.

The set is an urban collection of corrugated metal, grafiti-covered walls, industrial pipe and metal ladders. It will move to Lee Street for next week’s performances. Lee Street’s technical director, Chris Speer, who studied at Catawba, designed the set.

Meredith Fox, Catawba’s visiting assistant professor of music and dance, choreographed the show. And Stephanie Lindley, who has worked in  music and theater in the Triad area, is the musical director of a band tucked into part of the stage.

Erin Dougherty designed the costumes, a collection, no doubt, of thrift store finds.

The show is a full three hours with one intermission. Most of it is in song, too, so that’s what moves the simple plot along to a sometimes sad and somewhat triumphant conclusion.