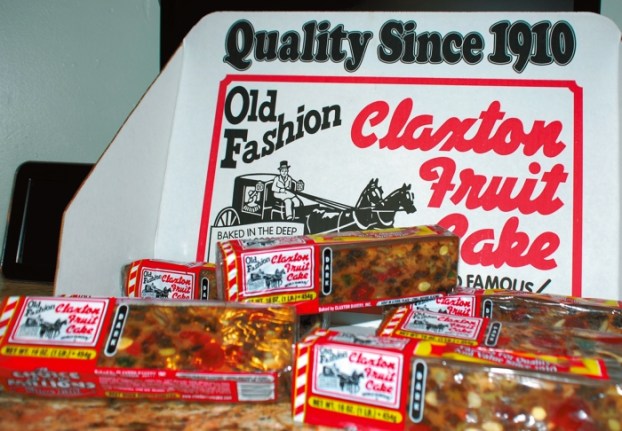 SALISBURY — Selling fruitcake takes a special kind of salesperson. That’s why, as we go into another holiday season, you have to tip your hat to all the Civitans out there pushing these highly preserved, sugar-infused bricks of fruits and nuts.

You’ve heard the joke, thought to be started by the late Johnny Carson, who said there is only one fruitcake in the world and it’s just passed around every year from household to household.

Go to YouTube, and you can find numerous videos of people coming up with ingenuous ways to destroy fruitcake — hah, as if it’s destructible.

No holiday food carries a bigger image problem. Like blonde jokes, there are fruitcake jokes. On the Internet, you can find lists of what you can do with fruitcake, given you probably won’t eat the one you receive as a gift. Some ideas: Use it to balance a wobbly table. Substitute it for sandbags during the next hurricane. Lay fruitcakes down as speed bumps in your neighborhood. Throw it skyward for targets in skeet-shooting competitions.

Among other things, “fruitcake” is an insult aimed at a crazy person, such as “he’s a total fruitcake,” or the even longer-standing slam, “She’s nutty as a fruitcake.” A town in Colorado — Manitou Springs — sponsors The Great Fruitcake Toss every January, and about 500 people show up. Why can’t Salisbury think out of the fruitcake box like this?

The Civitans have a special selling arrangement with the Claxton Baking Co. in Claxton, Ga., which proclaims itself “Fruitcake Capital of the World” on a town water tower. Lee Wagoner, a self-proclaimed Queen of Fruitcake, is in her third year as fruitcake sales chairman for the Salisbury Civitan Club.

“I am a fruitcake,” Wagoner says, “so I guess that’s how I ended up with it.”

Wagoner has asked each member of the club to take a minimum of five Claxton fruitcakes to sell. Every Thursday, when she gives a status report on fruitcake sales, her fellow Civitans greet her with a collective moan. “They run when they see me,” she adds.

Wagoner set the individual members’ sales goal at 757 pounds this year. They are pushing one-pound slabs for $4 each. These loaves come in either light (traditional) or dark (made with molasses). In addition, Civitans receive a revenue percentage from the fruitcakes sold at Food Lion and Walmart. Wagoner says Salisbury Civitan fruitcakes also are available at Innes Street Drug’s two locations and First Bank.

But don’t forget all the fruitcakes being sold by other Civitan Clubs, including those in Granite Quarry, Faith, Rockwell, Woodleaf, China Grove, Cooleemee, Mocksville and through the Summit Club.

Back in the day, Wagoner sold Girl Scout cookies, and she says they are much easier merchandise to move than the yule logs of fruitcake. Civitans are obligated to sell the fruitcake as one of their many fundraisers. The Claxton fruitcakes do not include alcohol, but many fruitcakes out there — if there actually are more than one — are soaked with brandy, rum or other spirits.

“You buy a box, and it lasts to the end of time,” Wagoner says.

A retired caterer, Wagoner will tell you she’s not a fruitcake fan herself, but she has found ways to make it more delicious than it already is by mixing it into cookie batter and baking chunky cookies or coating slices with a topping of chocolate and pecans.

Wagoner knows fruitcake is the butt of a lot of jokes, but she claims many people out there, especially old-timers, can’t go through a holiday without it. The Civitan fruitcake-selling season starts in November and extends until the day after Christmas, which is National Fruitcake Day.

Yes, fruitcake has its own day.

“This is a lot of work for a little bit of money,” Wagoner says of selling fruitcakes, but the money goes to good causes supported by Civitans. Wagoner became chairman of club sales after making the mistake several years back of asking for six cases of fruitcake to sell.

“I think I can sell anything to people,” Wagoner says. “I was wrong.”

Still, she received a “Sales Merit Award” for her efforts, plus the job of wrangling the other club members in seasons to come.

In Cleveland, Butch Clements likes to give birth dates to the fruitcakes he makes every holiday season because they each weigh about 8 pounds and take six hours of labor. Using his mother’s recipe, he has been making fruitcakes about 30 years.

“We all have family traditions,” he says.

Clements starts with a typical pound cake batter and adds apple pie spice for the flavoring of the cake itself. He then mixes in 3 or 4 pounds of candied fruit, chopped pecans, figs and raisins. After it’s baked, he adds two tablespoons of blackberry wine each day for 10 consecutive days.

The alcohol will evaporate, but it leaves the blackberry taste and restores some of the moisture lost in baking.

“I just happen to have three on the counter right now,” Clements says.

Clements has eaten and enjoyed other homemade fruitcakes, but he is not a fan of store-bought loaves. “I haven’t found one yet that I really like,” he says.

Clements’ fruitcakes are shared with close family and friends. The best way to eat his fruitcake, Clements says, is to serve up a slice with eggnog ice cream.

Back in Salisbury, Wagoner reports the oldest fruitcake in America to be 125 years old, and the most expensive fruitcake ever made was worth $1.65 million. But that was mainly because the fruitcake included 223 diamonds and was wrapped in gold.

“I wouldn’t have a problem with that one,” Wagoner says.

Wineka column: A wreath shows up on Veterans Day