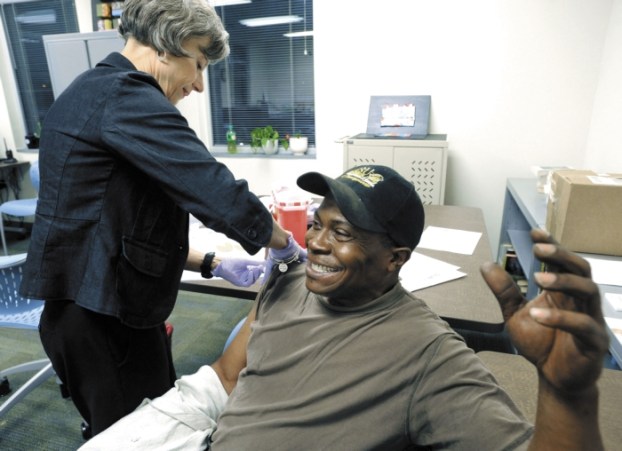 As the clients entered the building for the evening meal, David Holston gave them the option of getting a flu shot to help keep them healthy this winter. Holston, the person in charge of the shelter at night, explained that there would be about 20 or so people who could get the shots. Of the 60-plus clients who would spend Wednesday night at the shelter, about a fourth are military veterans who will get their shots at the VA Hospital and others are on Medicare and can get their vaccinations from their doctors.

Novant Health Rowan Medical Center made the flu shots available as part of its community outreach program. The hospital provided two registered nurses, Val Velte and Kim Lucas, along with Jessica Ijames, the community engagement manager, to administer the program. It has become an annual service for Rowan Helping Ministries.

Between shots, Novant outpatient nurse Lucas said she enjoyed doing the outreach in the community. She always wanted to be a nurse starting in high school, where she was a “candy striper.” Always loving her job, she talked about being a nurse for the late Post reporter Homer Lucas and the Hurley family. If you have had outpatient surgery at the local hospital, you may have been treated by Lucas.

The first Rowan Helping Ministries client to get a flu shot was Christy Brewer. It was interesting to see all the reactions to the shots. All seemed very appreciative of the chance to get the flu prevention shots. There were many big smiles while going under the needle. I don’t know if the smiles were for the shots or for the photos that I was taking of them.

Asking each resident if they objected to having their photo taken and explaining the possibility that the picture would be in the newspaper, almost all agreed. One really big, burly man, well over 6 feet tall, didn’t want me to photograph him. He said he wasn’t good with shots and laughingly said, “I might cry.” He didn’t cry, but he had to look away and slightly bite his lip. He really didn’t like shots.

Brewer, the first to get a shot, had her hair pulled back, but when I asked about a photo she said yes, “but let me put my hair down for the photo.”

Fred Weaver said he didn’t like photos, but since it was for a good cause he would welcome a photo. He said if it would help others go out and get the shots and keep them healthy, it would be worth getting his photo taken.

Tiffany Hartman, had a pretty smile on her face while getting her shot. She had her two beautiful children with her. Her request was, “just don’t photograph my children.”

Rebecca Meade said I could photograph her. She said she wished she had known about the photo so that she could have applied some makeup. As she got her shot, she struck up several poses, moving her head from side to side while wearing a big smile in all the positions.

One laughing gentleman said he was on the “most wanted list.” He then added, “I need to stop telling people about the wanted list because someone will start believing me.”

When Zenobia Clark got his shot, he jumped when he thought the needle touched his arm. It was only the cool alcohol cotton swab. He settled down for the real shot.

I think most of the residents enjoyed the flu shot event. I think it was a bright spot in their day. In their minds they knew it might help keep them healthy during the winter. I think they enjoyed the attention of being photographed as much as I enjoyed meeting each of them during the photo and of course, the flu shot.

Darrell Blackwelder: Now is not the time to prune

By Darrell Blackwelder Cooperative Extension Outdoor activities and chores never seem to cease, even with the cold blast of winter.... read more