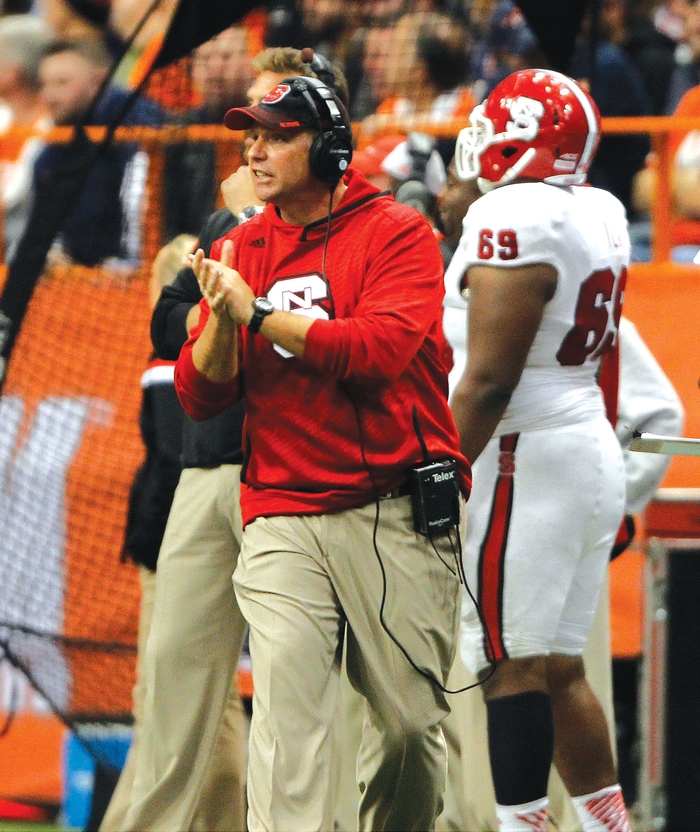 The Associated Press N.C. State head coach Dave Doeren calls out to his players against Syracuse. Doeren and Wake Forest head coach Dave Clawson know the rigors of the first year of trying to build a program in the ACC.

RALEIGH, N.C. (AP) — If anyone can empathize with Dave Clawson’s tough first year at Wake Forest, Dave Doeren can.

His first season at North Carolina State in 2013 was just as difficult.

Doeren says he knows “what he’s been through, what he’s going through.”

He’s yet to win a conference game at home, and his final chance to do so this year comes against the last-place Demon Deacons (2-7, 0-5) — who have dropped five straight and haven’t won in Raleigh since 2006.

“This is a team in our state, in our conference, in our division, and the bottom line is, for our team to be successful in the short term and long term, this is a game we have to have,” Clawson said.

The two coaches have gone against each other only once before, when Doeren’s Northern Illinois team routed Clawson and Bowling Green 45-14 in 2011.

But that was the MAC, and this is the ACC — where both coaches have struggled during their rebuilding jobs.

Wake Forest has the nation’s worst offense, averaging 203 total yards, and also ranks last with just 31.4 yards rushing. All but one of the Demon Deacons’ ACC losses have come by at least 10 points.

N.C. State hasn’t been much better: All five of the Wolfpack’s defeats have come in conference games in which they’ve given up at least 30 points and lost by at least 12 — including last week’s 56-23 loss to Georgia Tech.

“They play hard. We need to play smarter at times and need to finish plays better at times, but we stick together,” Doeren said.

Pittsburgh at North Carolina: CHAPEL HILL, N.C. (AP) — North Carolina’s defense has struggled to stop anybody this season. Now the Tar Heels must figure out a way to slow down one of the nation’s top rushers.

Pittsburgh’s James Conner is averaging 149.1 yards rushing, good for fourth nationally, heading into Saturday’s trip to UNC. And the 6-foot-2, 250-pound sophomore is facing a defense allowing nearly 220 yards rushing per game, ranking near the bottom of the national statistics.

“You watch him on film and it’s scary, because he’s done it against everybody they’ve played and they pride themselves on what they’re doing,” UNC coach Larry Fedora said. “That’s what they’re going to hang their hat on, and we have to do everything we can to slow them down.”

The Tar Heels (4-5, 2-3 Atlantic Coast Conference) and the Panthers (4-5, 2-3) enter the game in the same position, each needing two wins in the final three games to become bowl eligible.

Conner has run for 1,342 yards and 17 touchdowns this year while averaging 6.1 yards per carry. He’s coming off a career-best 263 yards and three touchdowns on 38 carries in the double-overtime home loss to Duke on Nov. 1, his second 200-yard performance of the year.

“I still get treatment on my shoulders and knees, just those are the parts that get sore,” Conner said. “Body feels good. After 30 carries it was good to have a bye week, but I still feel good.”

The Tar Heels have allowed five individual 100-yard games this season, according to STATS.

“We’re just going to have to buckle down,” UNC safety Tim Scott said, “and put our big-boy pads on.”

Virginia Tech at Duke: DURHAM, N.C. (AP) — So much for those who wondered if Duke’s run to the Atlantic Coast Conference championship game was a one-year fluke.

In some ways, these Blue Devils have been even better.

No. 19 Duke (8-1, 4-1) debuts its highest national ranking in two decades Saturday when the Blue Devils host Virginia Tech (4-5, 1-4), which is looking to avoid its longest in-season losing streak since 1992.

Duke closes its season with three straight home games — an enviable position as it looks to wrap up its second straight Coastal Division title.

They’ve done anything but take a step back: Duke had two losses at this point last year, and was never ranked higher than 20th. And while those Blue Devils reeled off eight straight wins to catapult themselves back from an 0-2 start to league play, this group has spent all season at or near the top of the division.

Now comes a visit from the Hokies, who enter on a three-game losing streak. They haven’t lost four in a row in the same year since 1992 .

Virginia Tech needs to win two of its last three to get back to six wins.

“We’re trying to keep it even keel right now,” quarterback Michael Brewer said. “It’s not a time to panic or anything like that. We understand that we’re in a bit of a hole here, but the best thing for us right now is to have a good week of practice and play well against Duke.”