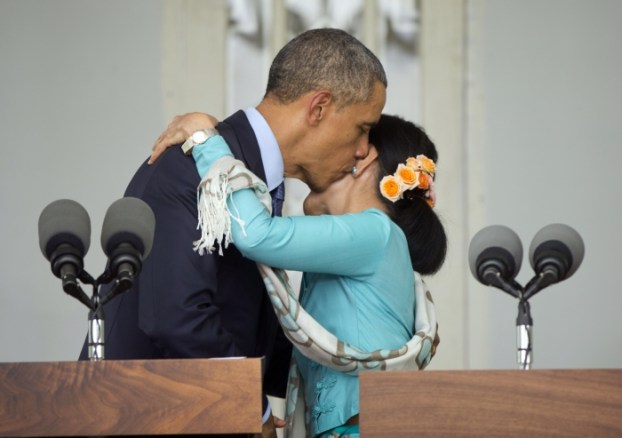 The defense secretary’s action follows stories by the AP that revealed problems in management, morale, security and safety in America’s nuclear force.

The president weighs into controversies over the treatment of religious minorities and a constitutional rule keeping opposition leader Suu Kyi from running for president.

3. DOCTOR WITH EBOLA COMING TO U.S. FOR CARE

AP’s Mike Stobbe reports Dr. Martin Salia, a 44-year-old surgeon working in Sierra Leone, has been diagnosed with the virus and will be flown to Nebraska for treatment.

The annual gathering that groups democrats with authoritarians and rich nations with poor has suffered from a perception that it’s all talk and no action.

Muharram emboldens Iraq’s Shiite Muslim majority, underscoring its domination of the fractured capital and the vulnerability of the once-dominant Sunnis as fears rise of more sectarian bloodletting while the battle against Sunni extremists IS goes on elsewhere in the country.

6. OBAMA GOES IT ALONE ON IMMIGRATION

The president is poised to unveil executive actions that will shield possibly 5 million immigrants living in the country illegally from deportation, advocates say.

The government says 43 missing students were slain and incinerated, yet many of the poor families distrust the authorities and don’t believe the report.

The LAPD is relying on technology that tells officers where crime is most likely to occur and keeps track of bad guys they believe are most likely to commit them.

With illustration and short subsections, the world’s largest online social network explains what types of information it collects and how it uses the data.

Ryan Tannehill throws two second-half touchdown passes and Miami’s defense holds Buffalo without a TD in a 22-9 win over the Bills.

Salisbury attorney Bill Graham is among 17 business leaders from across the state who have been appointed to the board of directors... read more