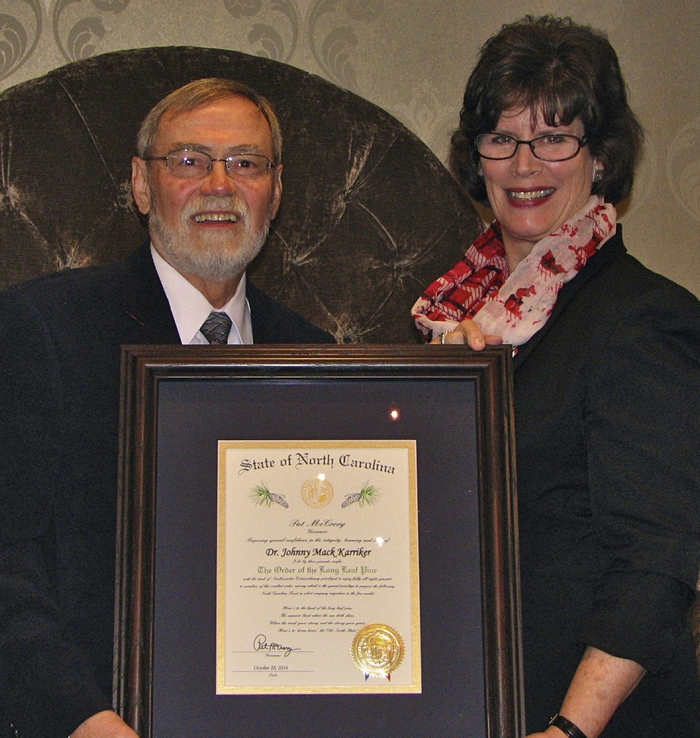 Presented by N.C. Rep. Rena Turner on Nov. 4 at a gathering of the Statesville Rotary Club, the Long Leaf Pine recognizes exceptional service to the state.

In addition to his educational career that includes 35 years with Gardner-Webb University, Karriker has actively served the Civitan and Rotary civic club organizations and the Lutheran church.

“I’m very humbled when I look over the list of people who’ve already received this honor,” he said. “Honorees include people like Andy Griffith, Charles Kuralt, Billy Graham and Maya Angelou. The highlight of my life has been serving other people and being an educator.”

Karriker joined Gardner-Webb as an adjunct professor for environmental science in the early days of the Greater Opportunities for Adult Learners program, now known as the Degree Completion Program. He is now associate dean and regional manager for 12 Gardner-Webb campus centers.

Born to Hoke and the late Dorothy Karriker and raised on a dairy farm in Rowan County, he attended Catawba College in Salisbury and earned a degree in chemistry. That led him to jobs with the S.C. Department of Agriculture and Fiber Industries, where he learned he needed more education to advance in his career. After going back to school and earning his doctorate degree in physical chemistry at the University of South Carolina, he realized he preferred education over industry.

Now 72, Karriker said he plans to continue his service as an educator for several more years and would even teach face-to-face classes for Gardner-Webb after he retires. He anticipates the chance to hunt and travel with his wife Renae in the coming years, but he will always relish chances to educate and serve.

“Gardner-Webb has allowed me to stay in education and teaching, which is what I love to do,” Karriker said. “Along with my service to the community and the church, the things that make a person eligible for this award, education has given me fulfillment in my life.”