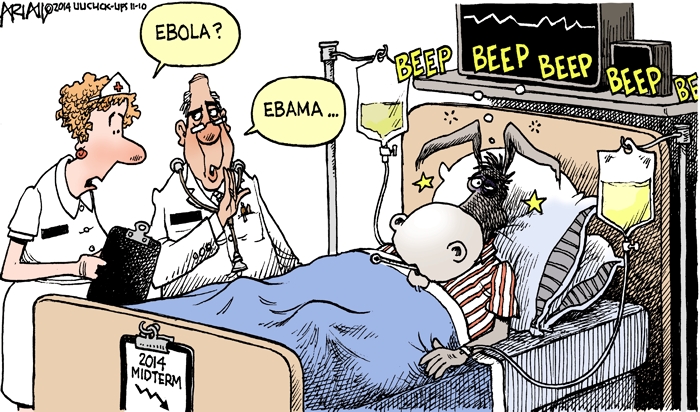 RALEIGH — Why did Democrats have a disappointing midterm election? Ask the Democrats. They’ve been thinking about this a lot and offer many explanations. Let’s explore their various legends of the fall campaign.

One is that they lost because of low turnout. Well, it’s true that the average turnout nationwide was lower than in past midterms. But the reason isn’t hard to see when you look closely at the 2014 map. Most of the competitive statewide races were in places like Maine, Iowa, Colorado, New Hampshire, Kansas, and Alaska. These states actually posted strong turnouts in 2014, many up substantially from 2010. But most of the nation’s most-populous states — including California, Texas, and New York — ended up with no competitive Senate or gubernatorial races. Understandably, many voters there stayed home.

North Carolina was one of the exceptions: a populous state with a competitive race. What happened here? Turnout was good. The proper measurement back in time is to compare votes cast to the voting-aged population. According to preliminary estimates, 38 percent of voting-aged North Carolinians cast a ballot in 2014. That was slightly higher than in 2010 and significantly higher than the average midterm turnout (33 percent) since the advent of two-party competition in the early 1970s. Indeed, 2014 had the second-highest turnout for a modern North Carolina midterm, exceeded only by 1990’s 41 percent.

Another explanation Democrats offer is “voter suppression.” It’s a close cousin of the low-turnout explanation, and suffers from the same family trait of weak evidence. Not only was North Carolina’s voter turnout quite strong for a midterm election, but also the very populations whose votes were supposedly suppressed ended up participating in large numbers. African-American voters, for example, made up 21 percent of the 2014 electorate, according to exit polls. That’s what most pre-election pollsters had projected. It’s possible that when the state board of elections released its official statistics, the count may be a bit different. But black turnout still likely exceeded its 2010 level and the historical average for midterms. As for early voting, changing the calendar to provide more sites open more hours over fewer days didn’t result in less participation. Early voting was up substantially this year.

Still another explanation is that Democrats lost because of free-spending billionaires corrupting the process. However, a large number of the free-spending billionaires in the 2014 elections were helping Democrats. Although we don’t know the final numbers yet, Kay Hagan and organizations aiding her cause appear to have outspent Thom Tillis and the organizations aiding him. In legislative races, left-leaning groups spent millions of dollars in independent expenditures to boost Democratic challengers and still had a disappointing year. Keep in mind that the Republicans didn’t take the state legislature in 2010 by spending more money. They were significantly outspent, even if you include independent expenditures.

Finally, Democrats say they lost because of gerrymandering. This explanation, at least, has some truth to it, although it has no bearing on the Tillis-Hagan race. Favorable districts have clearly boosted the number of Republican victories for Congress and state legislature. Still, GOP candidates got 56 percent of the statewide vote for U.S. House and 54 percent for the General Assembly. They’d have won most of the seats in 2014, anyway. Again, keep in mind that the Republicans won the legislature in 2010 despite running in pro-Democratic districts. I’m all for redistricting reform, but Democrats need not be so fatalistic. If they had recruited stronger candidates in more districts and spent their money on a more effective message, they’d have done better.

Just as Republicans would be foolish to react to their 2014 successes with triumphalism or complacency, Democrats are foolish to react to their 2014 losses with denial or misdirection. Yes, Kay Hagan lost primarily because of her close association with an unpopular president. That was, of course, the GOP strategy. And because the central message of Hagan’s 2008 campaign was that Elizabeth Dole voted 92 percent of the time with President Bush, Republicans may be forgiven for seeing poetic justice where Democrats see bad luck.

Hood is chairman of the John Locke Foundation.

Everyone’s equal on the neutral Net