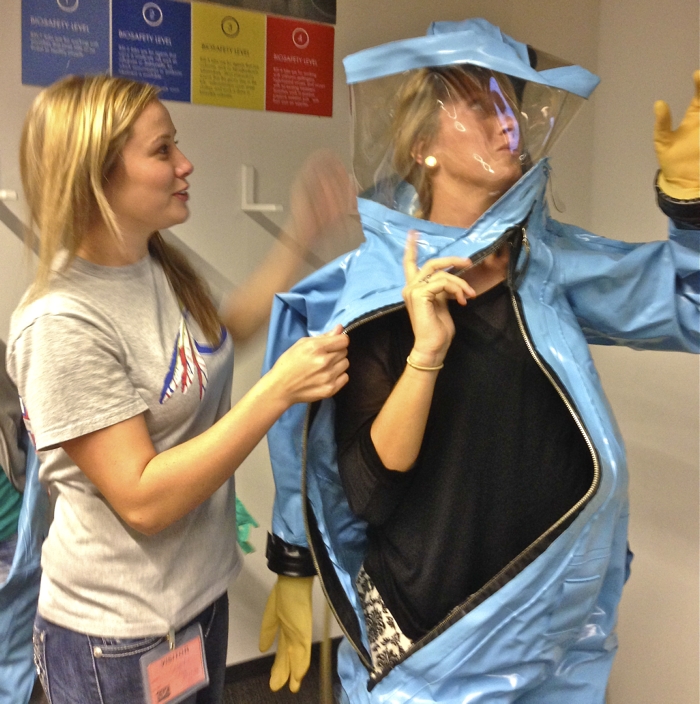 Fifteen Catawba College honors students studying infectious diseases this semester got a hands-on look at the Centers for Disease Control and Prevention in Atlanta.

The honors class is called “Outbreak!” and is taught by biology professor and assistant provost Dr. Steve Coggin.

Although the course focuses on cholera, plague, syphilis, measles, tuberculosis and leprosy, it coincided with the Ebola virus’ epidemic in West Africa and its first appearances in the United States.

Students in the Outbreak! class have discussed Ebola every day, read a book about an earlier outbreak of Ebola in monkeys in the U.S. and saw disease control and prevention in action when they toured the David J. Sencer Museum at the Centers for Disease Control.

At the Centers for Disease Control, students learned about the eradication of small pox, the elimination of malaria from the U.S., the AIDS epidemic and Legionnaire’s disease.

The students have also read extensively about the safety measures needed to work with the most dangerous pathogens in Biosafety Level 4 labs. These measures include working in a biohazard suit like those seen pictured in news coverage of the Ebola crisis.

The museum at the Centers for Disease Control had several of these suits, also referred to as space suits, that the students were able to try on, giving them a brief taste of how difficult it is to work with dangerous microbes.

Not only did the students find them difficult to get into, they also said they were hot and the helmet fogged up once the suit was sealed.

The students in the Outbreak! class also did an experiment to demonstrate Koch’s Postulates with a fungal disease of oranges and to prove an organism causes disease.

The Outbreak! students have also run mathematical models of epidemics to examine the effect of population size, infection rate and recovery rate. Mathematical simulations, such as these, are essential for epidemiologists to understand a disease and perhaps stop an outbreak.