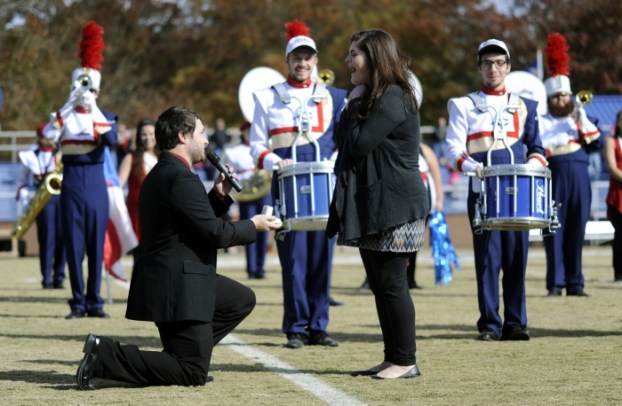 Catawba College won its game against North Greenville University Saturday afternoon, but that wasn’t the only victory in Schuford Stadium this weekend.

Two Catawba students, Uriah Futch and Shawn Galloway, each got down on one knee to ask their girlfriends to become their wives. Allison Andrews and Kayela Wilson both said “yes.”

Everything seemed normal in the minutes leading up Catawba’s kick-off against North Greenville – senior football players and athletic trainers, cheerleaders and band members were recognized and the national anthem was sung.

Then Andrews, a 2014 Catawba alum, took the field to sing the school’s alma mater with the Catawba PRIDE marching band – a new tradition, or so she was told.

But as Andrews began to sing, things began to deviate from the expected. Futch, who should have been playing with the rest of the band, made his way across the football field dressed in a suit and tie.

He tapped Andrews on the shoulder as she finished the song and took the microphone away from her.

“They say it is better to ask forgiveness than asking for permission. So right now, I would like to ask forgiveness for telling you a fib – you are not here to start a tradition. But instead, I have another important question,” he said.

With that, he took a knee and asked Andrews to marry him. She did a little dance and said yes. As the two shared a hug and a kiss, the Catawba PRIDE began playing a celebratory song.

“I knew it was coming at some point, but I didn’t know how or when or where,” Andrews said after the fact.

“I turned, and I saw him in the jacket, and I was confused. Then all the pieces came together,” she said. “I was shocked.”

“She’s very outgoing and energetic and would want lots of friends and family to be there,” Futch said.

“I just woke up one night and decided this is what I was going to do,” he added.

He initially told her that the music department was looking for an alumnus to sing the national anthem at the last home game of the season and she agreed to sign up.

A few days later, they found out that rather than sing the national anthem, she would be singing the school’s alma mater instead.

“I was not really excited about singing the alma mater,” Andrews said.

She conceded, however, when Futch said she’d do it if she “really loved” him.

The day of the proposal, she showed up for her 9 a.m. rehearsal and was told that when she finished she could just walk off the field.

“I did not walk off,” she laughed, as she recalled the proposal.

“I actually had a little mini speech planned,” Futch said. “As soon as I stepped on the field, I forgot it.”

“It was very short and sweet,” Andrews said.

Andrews’ ring is unique. Andrews handpicked it from a jewelry maker in Tel Aviv, Israel.

“I have a severe allergy to metal,” Andrews said, explaining that any metal jewelry she wears has to be consistently coated with clear nail polish.

The band is made of ebony wood with crushed mother of pearl, with a solitaire diamond.

The two have been dating about a year and a half, but Andrews caught Futch’s eye a year before they became friends.

“I first saw her at Performance Hour, and I thought she had the most beautiful voice,” he said.

The following year at that same event, the two finally met. Shortly after, they went on a date and they talked for hours and “couldn’t stop talking since,” Andrews said.

The second proposal of the afternoon came with a little less fanfare.

Catawba wide receiver Galloway was taking pictures with Wilson in the end zone when he got down on one knee, pulled the ring out of his jersey and asked her to marry him.

Galloway said he hadn’t heard about Futch and Andrews’ proposal when he decided to ask Wilson to marry him.

“I was planning to do it after one of the home games,” Galloway said.

He added that since it was the last home game of the season and with Catawba’s big win against North Greenville, it seemed like the best time to pop the question.

“I didn’t want it to be too public,” Galloway said.

“I was shocked,” Wilson said.

Her father, Todd Wilson, said Galloway asked to marry his daughter just moments before he proposed – “right here in the end zone.”

Galloway and Wilson are high school sweethearts, and were introduced by mutual friends at East Rowan High School.

“We met in the lunch line,” Wilson said.

Neither couple has set a wedding date yet.

Bringing a parade to veterans

Bands from South Rowan, East Rowan and West Rowan came out and performed a parade for the folks at Trinity... read more