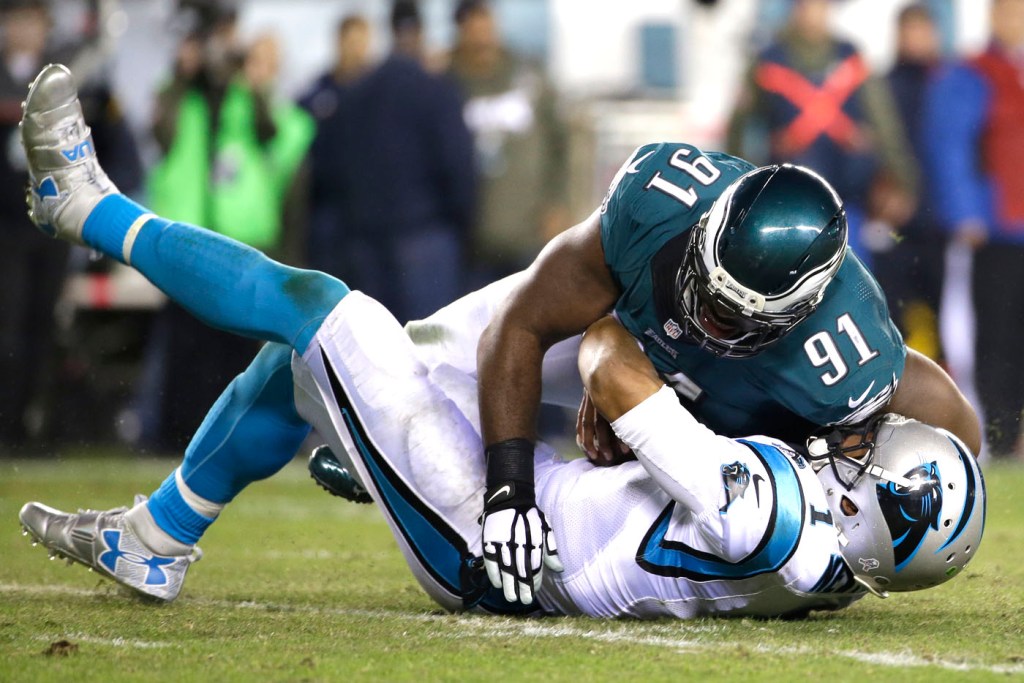 CHARLOTTE, N.C. (AP) — Panthers coach Ron Rivera walked into his news conference Tuesday and, before taking any questions, looked directly at reporters and said “No, he’s not injured.”

Rivera did his best to dispute published reports that two-time Pro Bowl quarterback Cam Newton was injured during Carolina’s lopsided 45-21 loss to Philadelphia on Monday night.

Rivera said he’s spoken to trainers who informed him that Newton is “fine” despite being sacked a career-high nine times.

That’s a small piece of good news for a Carolina team mired in a four-game losing streak and 1-6-1 in its past eight games.

Players had Tuesday off and Newton wasn’t available for comment.

“I’m great. That’s not going to be a distraction,” Newton said after the game in Philadelphia. “Yeah, I got hit a lot, but it’s all in the game. We’re not playing ballet. We’re not running track or anything. This is a physical sport. It’s what you sign up for.”

Newton has surgery on his ankle in March, but offensive coordinator Mike Shula said he doesn’t see anything different about Newton’s mobility, even though it appears he has lacked explosiveness and the ability to escape in the pocket.

“He’s gotten healthier as the season has gone by, and I think he’s probably looked like he’s looked the past couple of years at this time,” Shula said. “He had a couple of fast guys chasing him, that’s all.”

Rivera kept Newton in the game even with the Panthers down 38 points to the Eagles in the fourth quarter.

He said the team needed to develop some cohesiveness on offense moving forward. Newton threw two late touchdowns to Kelvin Benjamin with the outcome already determined.

Rivera said he hasn’t given up on the season, even as he and the Panthers (3-6-1) face criticism on local sports talk radio.

“I know there is a sense of panic, but I’m not going there,” Rivera said.

He added that despite the defeat, the Panthers are “on the cusp” of turning things around and suggested they can still win the NFC South, where they are a half-game behind division-leading New Orleans (4-5).

The Panthers still control their playoff destiny — even though they don’t look anything like a playoff team.

If there’s some positive news for the Panthers moving forward it’s that their schedule gets significantly easier after going 0-4-1 against five playoff teams from last season. They only face one team with a winning record the rest of the season — the Cleveland Browns.

Rivera was an assistant coach with the 2008 San Diego Chargers, a team that started 4-8, but the made the playoffs after winning its final four games.

“I have been through this before, and I know what it is like,” Rivera said. “So we’re mirroring that (Chargers’ team), but at the same time we have to start making hay. Eventually everyone is going to start righting the ship and if we’re not where we need to be then that is going to pass us up.”

The Panthers won the division with a 12-4 record last season.

But this year’s team hasn’t resembled that club in any stretch.

Aside from their struggles protecting Newton and running, the Panthers have given up more points in 10 games than they did in 16 games last season.

“Everyone wants to compare us with last year’s team but this isn’t last year’s team,” left tackle Byron Bell said after the game. “This is a new team. We have to continue to grow, learn one another. There is always room for improvement.”

NOTES: Rivera said starting defensive tackle Star Lotulelei had an MRI on his left ankle which revealed no significant damage. He expects Lotulelei to miss Sunday’s game at Atlanta and return after the bye week. … Rivera also said he expects nickel back Bene Benwikere to return to practice Wednesday.