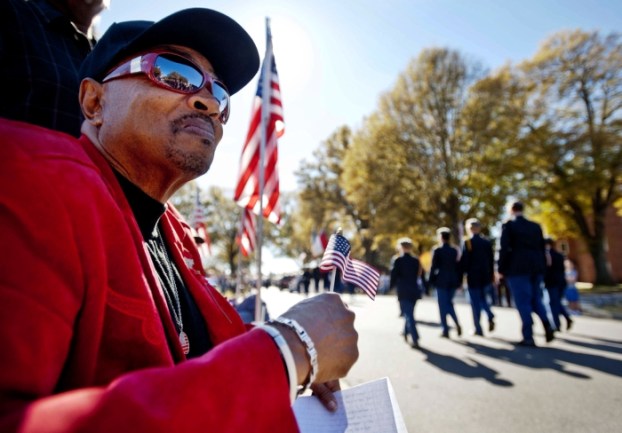 JON C. LAKEY / SALISBURY POST William Glenn watches the local high school JROTC units pass by during the annual Veteran's Day parade at the Hefner VA Medical Center on Tuesday afternoon. Glenn, from Salisbury, is a veteran of the US Marine Corps, having served between 1963-1967.

Before the parade began, VA employees helped the patients who were well enough to go outside where they could watch the action, and children darted around handing out goody bags to the veterans as they waited.

Local high school bands marched to the patriotic strains of “God Bless America” and “The Star Spangled Banner,” while junior ROTC squads chanted cadences as they marched along the parade route.

Lana Jackson came to the parade with her aunt and grandmother and took photos of East Rowan’s marching band for the yearbook, but her favorite part, she said, was seeing “all the veterans on the floats.”

Boyd Morgan, a Rowan County native, attended the parade along with his wife and was dressed from head to toe in red, white and blue, complete with an American flag tie.

Morgan was an air traffic controller in the Air Force for 26 years from 1969 to 1996, and spent time in the continental United States, Germany, Greenland and remote Alaska. Now, he’s a veteran services officer in Davidson County.

Seeing so many people gather to show their appreciation for veterans means “everything” to him, Morgan said.

His favorite part of the parade was when he saw a young boy and his little sister run out into the parade to hug a retired Army sergeant major riding in a Jeep.

“I don’t think you can get any more touching than that,” Morgan said.

For some, Veterans Day is about honoring loved ones who served, and for others, it’s about remembering those who died. But for those who’ve served in the military themselves, Veterans Day is all about other veterans, according to 30-year Army veteran Dave Shaver.

“There’s a brotherhood among all veterans – no matter their service,” said Shaver, who served from 1949 to 1979 in Korea, Okinawa, Taiwan and Japan.

“I started out in the band,” he said, adding that he left the Army after the Korean War, but went back a few years later in Chemical Corps logistics.

Shaver said that people showing up meant a lot to him as a veteran.

“I think it’s seeing the young people and realizing they’re getting an education in patriotism,” he said. “It’s wonderful to walk down the street and have people thank you for your service.”

Military service runs in Shaver’s family. His brother is a World War II marine, and his grandson currently serves and is stationed in Japan.

The 84 year old stays at the VA in its long-term care unit.

Claude Lyerly turned 103 last week, but his sense of humor is as young as ever. Lyerly and his wife,... read more